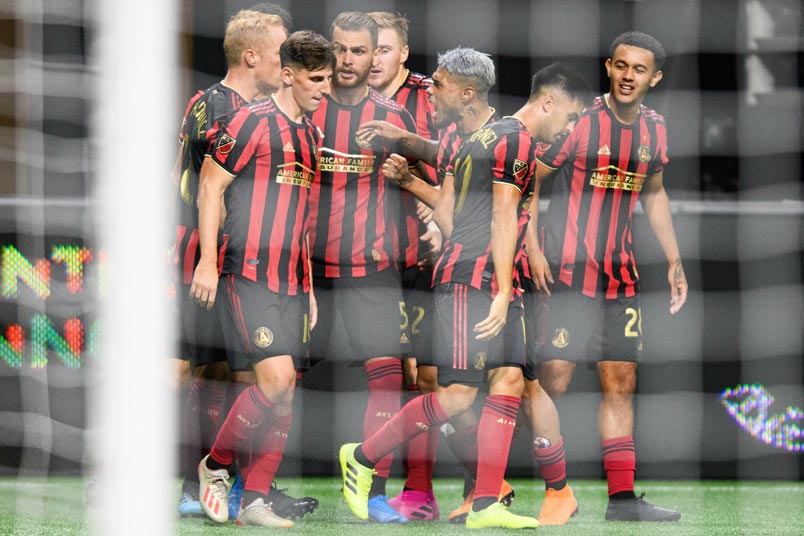 By Jason Davis – WASHINGTON, DC (Aug 16, 2019) US Soccer Players – For the Campeones Cup, the old adage “You never get a second chance to make a first impression” doesn’t hold true. It turns out, at least with one-off games between the champions of Major League Soccer and Liga MX, it’s possible to reboot everyone’s thinking.

On Wednesday night at Mercedes-Benz Stadium in Atlanta, defending MLS Cup champion Atlanta United defeated Liga MX Campeon de Campeones winners Club America 3-2 to win the second edition of the Campeones Cup. More than 40,000 fans attended the match, providing an atmosphere that energized the proceedings and increased the feeling of importance around the game.

That’s no small thing considering the youth of the event. Last year’s inaugural Campeones Cup in Toronto was little more than a sideshow, attracting a scant 14,000 fans to BMO Field for a match between Toronto FC and Tigres UANL. Toronto didn’t put up much of fight in the face of the Mexican powerhouse, losing the game 3-1.

TFC’s loss also came amid a trying season that failed to build off the MLS Cup success of the year prior. For a team lauded as the deepest in MLS history, the Reds struggled to juggle the demands of the Concacaf Champions League, MLS, the Canadian Championship, and a one-off game like the Campeones Cup.

The first editions suffered from poor circumstances. The second thrived because of good ones.

The stage most certainly helped. Mercedes-Benz Stadium holds and accentuates noise under its retractable roof design. Even half-filled, it serves as a cauldron for the unfolding game on the field, with swells of cheers from the crowd filtering across on the broadcast.

Atlanta United’s two-plus years in MLS stand as evidence the venue’s ability to make soccer games there feel special. In that city, United will draw a strong crowd no matter the occasion. Toss in fans of Club America living around the region who descended on the stadium to get their chance to see Las Aquilas play and the backdrop went from “decent for a midweek exhibition” to “pretty good for a cup final”.

The cup final feel also owes plenty to Club America coach Miguel Herrera. The former coach of the Mexican national team has returned to America to preeminence in Liga MX since taking over in 2017. Part of that success is built on the ambition to win every trophy on offer. Ahead of the Campeones Cup game in Atlanta, Herrera made it a point to declare that America wanted to win the game and the award that came with a victory.

He backed up those statements with a full-strength lineup announced a full 24 hours ahead of the game. It’s Herrera’s habit to disclose his gameplan a day ahead of the game. Still, to do it before the Campeones Cup speaks to the game’s importance for Club America. It added to the buzz of the MLS challenge to Liga MX dominance in the region a near-constant as the two league pull closer together, ramping up the stakes.

It seemed as though the America coach presumed his team would win, and for good reason. No MLS team had beaten a Mexico club with a trophy on the line since DC United claimed the Concacaf Champions Cup back in 1998. The recent history of the Champions League speaks to the hill MLS faces when going up against the best Mexico has to offer.

Frank de Boer’s personnel choices were less straight-forward than Herrera’s. United’s head coach chose to start a mixed team, made up of some key starters with star forward Josef Martinez among them alongside a handful of reserve players. The lineup against a Mexican powerhouse included Dion Perreira, a winger with fewer than 600 minutes in MLS play this season, and backup goalkeeper Alec Kann.

The considerations of MLS play and a chase for 1st-place in the Eastern Conference pushed de Boer to rotate. There was enough first-line talent in the group to indicate that Atlanta took the game seriously. There wasn’t enough to suggest prioritizing the Campeones Cup over regular-season games.

Perhaps the most remarkable thing about Atlanta’s win was how the game played out. This was no smash-and-grab job. Atlanta earned everything it got in the game, playing toe-to-toe with America for a full 90 minutes. The game carried an intensity that belied the not-yet-established competitive history of the Campeones Cup. I

This time, it was the Mexican club that melted down in the face of an opponent with the will to win. MLS clubs have a poor track record standing strong in the face of typically superior Mexican league talent, wilting in the final moments with the game teetering on a turning point.

Atlanta never looked comfortable. They also didn’t look flustered the way so many MLS teams have before. The context of the game is important. No matter how many America fans were in the stands, United was playing at home. That’s rarely mattered before in MLS vs Liga MX.

The temptation is to declare Atlanta’s win the start of a new era. Or, following a kinder view of the gap between MLS and Liga MX, as proof that MLS teams can compete with their southern neighbors when the calendar is more kind. The Champions League’s poor fit at the beginning of the MLS season is simultaneously a legitimate problem and a weak excuse.

Wednesday’s match and Atlanta’s win doesn’t mean much if MLS teams can’t replicate it next spring. Anything can happen in one game. While that doesn’t usually mean MLS victory against Mexican competition, we can’t draw any sweeping conclusions from the Campeones Cup.

Here’s what we can say for certain. The Campeones Cup has a future. No matter the result, Wednesday’s clash set the tone for future editions of the game. Club America cared. Atlanta United cared. The chance to raise a trophy and claim bragging rights over the champion of a neighboring league lit a competitive fire in both teams. The Campeones Cup took its second chance to make a good first impression.