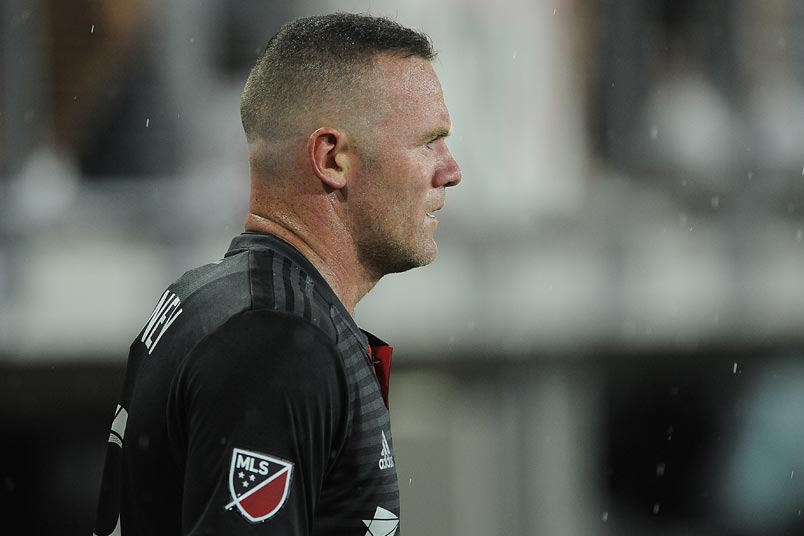 By Jason Davis – WASHINGTON, DC (Aug 7, 2019) US Soccer Players – There is no argument that the biggest bombshell of Major League Soccer’s secondary transfer window was Wayne Rooney. DC’s striker announced that he’s leaving to join Derby County of the English Championship as a player/coach. Since that move won’t happen until January, it doesn’t count as a summer transfer window move. The announcement comes now, but Rooney will remain with United through the end of the 2019 season.

When exactly that end comes is the question. The Black & Red have every reason to throw the kitchen sink at this campaign, the better to maximize Rooney’s final months in MLS. Currently sitting in 4th-place in a competitive Eastern Conference, DC needs reinforcements to help their superstar.

Tuesday delivered some of those reinforcements. The summer transfer window closes Wednesday night, pushing everyone around the league to make moves or miss out. Once the window closes, only players out-of-contract are available ahead of the roster freeze. While Rooney was in England doing press for his not yet new team, United was working the phones for new pieces to help in the drive to the playoffs.

First, what we know for sure in a period that’s awash in rumor. United acquired Brazilian midfielder Felipe Martins from Vancouver for the bargain price of $75,000 in 2020 Targeted Allocation Money and a 2020 International Roster Spot. DC general manager Dave Kasper talked up Felipe’s MLS history and skill in midfield.

“We are looking forward to adding more MLS experience to our midfield with the acquisition of Felipe,” he said in a statement. “We’re excited to add his ability to connect the game and break lines with his passing, as well as his competitiveness and bite.”

Don’t be fooled though. While Felipe is capable and will surely add some bite the most polite word available to United’s midfield, DC made the move because the club has an injury crisis as the defensive midfield spot. Russell Canouse is missing in action with a collapsed lung. Backup Chris Durkin suffered an ankle injury against Philadelphia on Sunday. Fill-in Junior Moreno will miss the next league match after being sent off against the Union. Desperation was the order of the day for DC in the move for Martins.

Less pressing, but perhaps just as important for their chances in the playoffs, was bringing in new attacking talent. A move for former Columbus Crew and LA Galaxy striker Ola Kamara is likely. Kamara is already on the scene in Washington waiting on paperwork.

Rumors being what they are, nothing is confirmed until announced by the club. Regardless, Kamara’s arrival should help take some pressure off of Rooney to be the club’s chief goal threat. Luciano Acosta is in the midst of a massive step back following last season’s breakthrough. United needs someone else to share the load with their English star.

Kamara’s arrival is still pending as of this writing. Winger Emmanuel Boateng’s move from the Galaxy east to DC is done. Boateng cost DC decidedly more than Felipe Martins. The Eastern Conference club shipped the Galaxy $250,000 in Targeted Allocation Money per the reporting of Kevin Baxter, a move made in anticipation of LA’s acquisition of Cristian Pavon from Boca Juniors. The Galaxy have chased Pavon for months and the events of the final day of the transfer window will tell whether that chase has been successful.

Missing out on Pavon would represent a dramatic failure for the Galaxy. Especially considering how much effort has gone into making the move happen and how much the club leaned on head coach Guillermo Barros Schelotto’s connections to the famed Argentine club.

In Boateng, DC gets a lightning-quick winger with the ability to change the game but an inconsistent record. A part-time player in LA, Boateng isn’t much of a goal-scorer, but he can provide a new dynamic out wide for DC.

The rest of the ticker on transfers with the window closing Wednesday night should have a “pending” notation next to it. Seattle is nearly done with a loan move for Emanuel Cecchini of Malaga. The Argentine midfielder moved to Spain in 2017, but never really settled with the club. Seattle’s acquisition will be a loan, per several reports.

LAFC’s move for Penarol youngster Brian Rodriguez went quiet just ahead of the window’s close. Penarol is where LAFC snagged Diego Rossi, a talented teenager who might not be long for the League. Rodriguez might be Rossi’s replacement should LAFC cash in on the other Uruguayan in the winter transfer window.

The only major deal done the day before the deadline involved a team that won’t play competitive matches for another six-plus months. Inter Miami CF (that remains a mouthful) officially announced a move for 19-year-old Venezuelan Christian Makoun on Tuesday. The club, such as it currently is, unveiled Makoun via a stylish social media-friendly video shared across Twitter, Instagram, and other platforms. Makoun was the captain of Venezuela’s U-20 national team during that group’s unsuccessful recent cycle. He was also on the squad, playing up an age group, that made the final of the U-20 World Cup in 2017.

Makoun was good enough to earn a shot with Juventus. Though he didn’t stick with the Italian giants, he has talent. Inter Miami might see him an investment more than an MLS-ready contributor. General manager Paul McDonough has charted a course, in the absence of a head coach, of signing young South Americans. Makoun joins Argentines Matias Pellegrini and Julian Carranza, both 19.

Getting those players on the field in MLS games won’t just be about winning. It will be about turning them into saleable commodities to help fund the rest of the club into the future. Major League Soccer’s move into the international transfer market is informing the new Miami entry’s approach to team-building in the earliest days of that process.

It’s a touch unfair to the other clubs who completed moves ahead of Wednesday’s deadline, but nothing else measures up to the DC’s mad dash for help or the machinations of the LA clubs. Before the window closes, a few more clubs might jump into the mix. Vancouver pulled off a loan for a Honduran winger, though it’s tough to know what kind of impact 24-year old Michaell Chirinos will make on a Whitecaps season that is already effectively lost.

Wednesday figures to be busy, down to the wire. A lot is riding on these moves, even if they will only be able to impact the less than a third of the regular season. The playoffs are the focus. Every team involved in major moves is not only about pushing them over the postseason line. It’s about winning games when they get there.