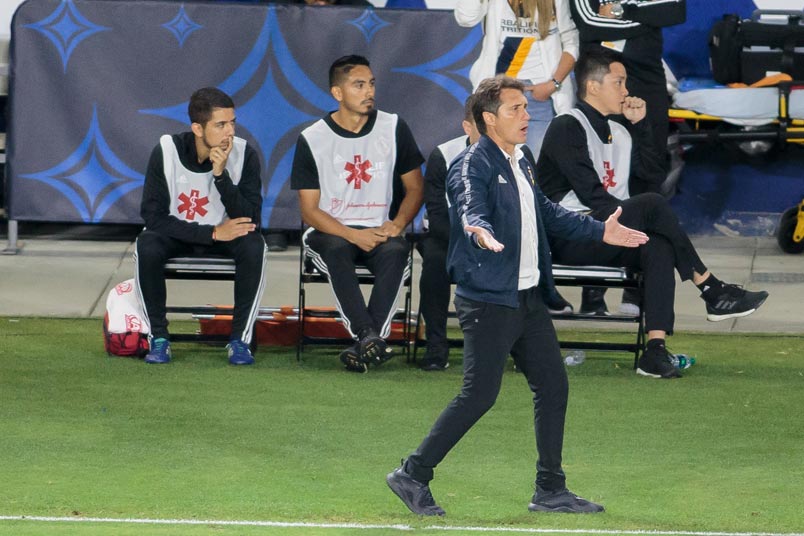 By Luis Bueno – RIVERSIDE, CA (Aug 22, 2019) US Soccer Players – MLS has done a great job at building the league up over the last decade-plus. After the 2007 MLS season, 12 teams were in existence. Now, 24 teams are vying for the MLS Cup title. On Tuesday, the league announced St Louis as the 28th franchise.

Forming the league has been a systematic process based on geography, venues, and willing investor/operators. Try as it might, however, the league cannot build everything.

As MLS is celebrating rivalry week, the matchups set in place feature some of the old standbys. Portland vs Seattle, FC Dallas vs Houston, Toronto vs Montreal for instance, as well as LAFC vs LA Galaxy. Also on the Rivalry Week schedule is LAFC vs San Jose, which is not a coincidence. Southern California and Northern California are natural rivals, in sports and culture in general. Still, simply placing two teams from those locales on a field and calling them rivals is a stretch.

Rivalries are organic. If LAFC and San Jose ever become rivals, it will be because of things that happen on the field and not where each side calls home. The LA Galaxy and San Jose have a robust rivalry, one of the top three in MLS bar none. That’s because of the history between the two sides and not just because it is SoCal vs NoCal.

Like everything else, though, LAFC needs to start from scratch and build. Simply because LAFC vs San Jose does not stand out more than, say, LAFC vs Real Salt Lake or LAFC vs Vancouver doesn’t mean much now. It’s also not a rivalry by default. That doesn’t exist.

LAFC’s lone real rival at the moment is, of course, the Galaxy. That budding rivalry needs an LAFC victory though to take the next step. LAFC will have that chance come Sunday. A loss or draw there and the team’s mentality will continue to suffer. That’s something that could haunt the second-year club.

From LAFC’s perspective though the Galaxy is a budding rivalry. From the Galaxy perspective, games against San Jose and Seattle tend to get the juices flowing more than other matchups.

Location has certainly helped the Galaxy and LAFC start off on the wrong foot with one another. Separated by 12 miles, the two teams’ home stadiums are practically on top of one another. Throw in LAFC’s deep-pocketed ownership group and the need to spend money to get high-profile players. That’s a league-wide message they send, but it’s heard loudest by the other LA team. A competent rival formed in rather quick time for the Galaxy to compete against.

The Galaxy is happy with the early returns on this rivalry. Entering Sunday’s encounter, the Galaxy has two wins. The other two matchups have finished in draws. Although, if each had been a boxing match, the judges would likely have given the Galaxy at worst a split-decision victory.

Contrast that with Galaxy vs San Jose matchups over the years. Each has major victories not just in the regular season, but also the playoffs. There are a lot of reasons to get up for Galaxy-San Jose matches. The Galaxy also has had a robust series with the Sounders for the same reason. It’s tough to forget the Sounders beating the Galaxy with a 3-2 victory in the 2015 MLS Cup playoffs.

Location alone is not the greatest factor now, and it was not a great factor a decade-plus ago when Chivas USA was around. While Chivas USA was no fan of the Galaxy, the club could hardly consider its stadium co-tenants rivals simply because the result was predictable. The Galaxy won the vast majority of encounters. Chivas USA and San Jose also did not enjoy a rivalry. Sure, games in Northern California made it easier for Chivas USA supporters to get to, but that did not create any sort of atmosphere at those games.

Chivas USA’s main rivals outside of the Galaxy were, at least for a time, Houston and Real Salt Lake. Chivas USA and Houston had an epic playoff series in 2006 which set the stage for further confrontations over the next few years. Chivas USA and Real Salt Lake came into the league together and were measured up against one another to see which team was further along. That debate all but ended when RSL beat Chivas USA in the 2008 MLS Cup playoffs.

LAFC has just one postseason match to its credit, a loss to RSL at the end of its expansion season. LAFC has already clinched a spot in this season’s playoffs. We’re waiting to work out who will join them. Perhaps they’ll face a team like Portland or FC Dallas, which could lead to a thrilling match that boils over with bad feelings that linger into next year. That is the makings of a rivalry. Location alone is not.

For now, though, LAFC will focus on its greatest obstacle once the game against San Jose finishes. The Galaxy will pay Banc of California Stadium a visit on Sunday. What happens there might help lay the groundwork for what will become the league’s greatest rivalry or could cement the Galaxy’s domination regardless of the Western Conference standings. Whatever direction it goes, though, it will have been because of what transpired over 90 minutes on the field.