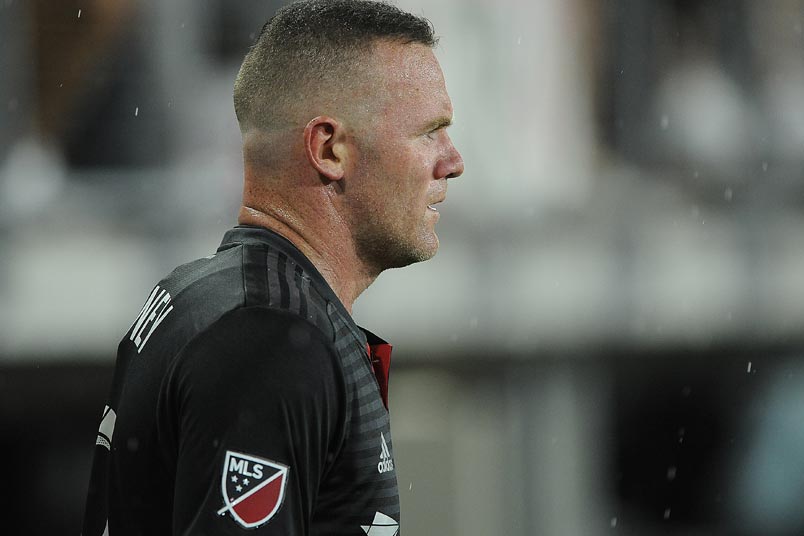 By Jason Davis – WASHINGTON, DC (Aug 23, 2019) US Soccer Players – Many metaphors might work for a discussion about the relationship between Wayne Rooney and DC United at the moment. It is a breakup, after all. Though Rooney will stay with United until the end of the season before returning to England to join Derby County, it does feel like a “divorced people sharing a house” situation.

Nobody should doubt Rooney’s commitment to United. At no point in his career has he been anything other than a true professional. Still, it’s only human to think about what comes next. For Rooney, that’s a return to English soccer with that season already underway.

The status of Rooney and DC United’s slow separation is front-and-center because of events on and off the field since he made his announcement. After a quick visit to Derby to announce the move, Rooney missed DC’s next game with an upper respiratory infection. United won that game without him, 2-1 over the Galaxy.

With Rooney back in the lineup at Vancouver, United coach Ben Olsen subbed him in the 72nd minute in what was a disappointing loss. On his way to the bench, Rooney excoriated the fourth official about the quality of the refereeing. He followed up that outburst with a tweet complaining about the MLS travel rules that require clubs to take commercial flights.

On Wednesday night, Rooney played in what might be his final game against DC’s long-time rival the New York Red Bulls. The Atlantic Cup has taken a backseat to other rivalries around the country in recent years. However, there’s still plenty of mutual dislike between the two clubs. More importantly, a win would extend DC’s lead over New York in the Eastern Conference standings. Going into the night, United had a single-point cushion over the Red Bulls for 4th-place, the last spot that guarantees a home playoff game in the first round.

Rooney didn’t finish the game against New York. Not because Olsen pulled him off, but because of a red card-worthy foul and a video review in the 24th minute. Rooney struck Red Bulls Cristian Cásseres Jr’s neck with his elbow, a move the forward described as an attempt to “ease the player out” in his post-game comments.

Now Rooney will miss United’s match on Sunday against Philadelphia at Talen Energy Stadium. Three weeks ago, the Union took United apart at Audi Field 5-1, with Rooney playing an ineffectual 90 minutes at the front of the formation.

Considering the Black-and-Red’s tenuous hold on a playoff spot and poor form, they need Rooney on the field. They also need him playing at the level that helped the team climb out of an early-season hole and reach the postseason in 2018. Anything less might lead to a disappointing end to Rooney’s time in MLS.

Two games hardly make a pattern. Rooney’s future is not his present. Part of what makes elite athletes who they are is the ability to compartmentalize. Rooney and United have a business agreement, one that works well beyond the usual player-team dynamic in professional sports. DC signed Rooney not just because he’s an elite soccer player and can help them win games, but because his name resonates with sports fans around the world.

It’s impossible to know if United would have launched into Audi Field in 2018 with as much success as it did with Rooney in the team if the club hadn’t convinced him to join from Everton. What we do know is that United will be under pressure to replace him, preferably with a player of equal ability if not equal star power.

There’s also the pressure to make the remaining time Rooney has with United count. That amount of time is down to a few as five games thanks to his suspension.

Spare a thought for Ben Olsen. He needs to figure out what Rooney can provide. There’s no world in which Rooney isn’t a guaranteed starter if available. Olsen is working within the context of a team that doesn’t have much margin for error. Luciano Acosta isn’t the player he was last season. Olsen has gone as far as to leave him out of the starting lineup in recent weeks.

A collection of moves at the transfer deadline bolstered United’s roster. Striker Ola Kamara scored his first DC goal in the loss against New York. He did that without Rooney on the field, something he’ll be hoping to replicate on Sunday in Chester.

Rooney will be back for a visit to Montreal on August 31. That game will have ramifications for the Eastern Conference playoff race. A win against Philly, and United could be back in 4th-place depending on the Red Bulls’ result against NYCFC.

Lose, and just staying in the playoff places could be fraught. The Impact will be desperate themselves and fresh off the first game under new head coach Wilmer Cabrera. By United’s visit, we might know if Montreal’s ousting of Remi Garde with a handful of games left in the season was a good move.

We might also know what Rooney has left to give during his brief stay in MLS. An illness, a rant, and a red card do not a malcontent make. Rooney is competitive, sometimes to a fault, and genuinely seems to get on with his MLS teammates. He has provided iconic moments in a DC United uniform. Can he provide any more? Form is fleeting, good or bad. For the best players under normal circumstances, a poor run rarely lasts. For Rooney and DC, these are not normal circumstances.