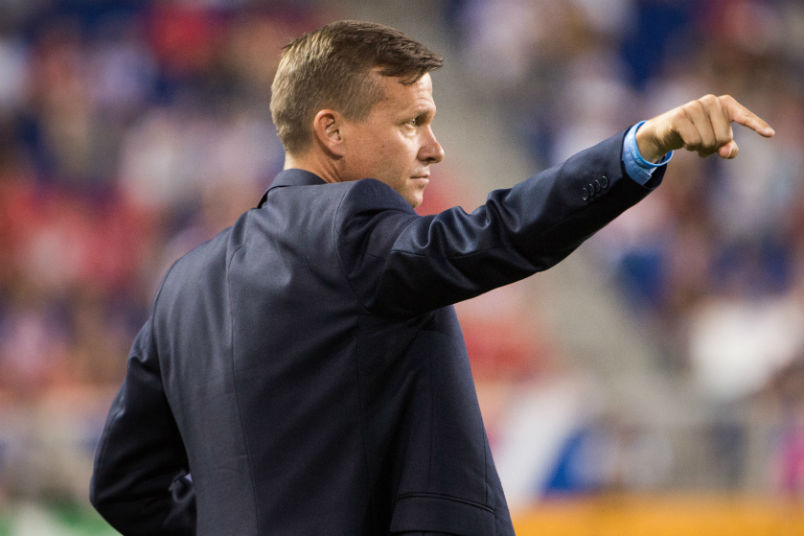 By Jason Davis – WASHINGTON, DC (Sep 18, 2019) US Soccer Players – Jesse Marsch is an American soccer coach. He grew up in Wisconsin, played college soccer at Princeton, and contributed to three different teams over his 14-year Major League Soccer career. Before getting his first head coaching position with the Montreal Impact in 2012, Marsch’s entire soccer experience happened in the United States.

After the Montreal stint ended in disappointment, Marsch truly built his reputation with the New York Red Bulls. Marsch manned the sidelines for three-plus seasons in New Jersey, winning one Supporters’ Shield and contributing to a second. The success in MLS earned him a chance to move to Germany to join the staff at RB Leipzig, where Marsch worked under the influential Ralf Rangnick.

Marsch is now in charge at Red Bull Salzburg of the Austrian Bundesliga. As of Tuesday, he’s the first American to coach a team in the group stages of the UEFA Champions League. It went well, at the risk of understating it. Red Bull Salzburg defeated Genk of Belgium 6-2 in front of a sellout crowd in Austria.

The star of the proceedings for Red Bull was Erling Braud Haland, a 19-year old Norweigan counted among the best young strikers in the world. Haland scored three goals in his Champions League debut, becoming the first teenage debutant to hit for a hat trick since Wayne Rooney back in 2004.

Genk was always supposed to be the easiest opponent on the Champions League schedule for Marsch and his team in Group A. The Belgian champion isn’t exactly a pushover, but the club can’t compete for talent against the likes of Napoli and Liverpool. Getting a win in the opener was crucial because it gets so much harder from here.

In two weeks, Red Bull will travel to Anfield, where Marsch will coach against Jurgen Klopp and the defending European champion. With that task looming, getting Genk on the schedule first is a significant stroke of luck. It also lets Marsch bask in the glow of success before the job gets tougher. Now he’s not just the first American to manage in the Champions League, he’s the first American to win a game in the Champions League. Considering the uphill climb coaches from the United States have to earn respect in the game’s original home, that’s not a small thing.

Everyone with a connection to Marsch and his career is claiming some part of his success. The Chicago Fire, one of his former playing homes, issued an item on his win Tuesday evening. The Ivy League posted a story to its website. The Milwaukee Journal Sentinel made sure to use the label “Wisconsinite” in its headline about Salzburg’s win. Red Bulls fans beam with pride, even if they might also miss their former head coach.

Context matters, but Marsch’s initial success is important. He can’t change the situation for American coaches all on his own. Still, at least one American has to win games at the highest level before others get a chance to follow in his footsteps.

American players made enough inroads over the last 30 years that European clubs are now actively recruiting in the United States. Through a combination of improved developmental pathways and the unrelenting globalization of the game, the United States is now a frontier in the chase for valuable talent.

American coaching lags far behind. There are plenty of reasons for that, starting with the principle of supply and demand. There are fewer coaching jobs in European soccer than roster spots and clubs are most likely to take the path of least resistance.

Getting into a position to compete for a job in one of Europe’s better leagues is nearly impossible for an American if his resume is only filled out with jobs in America. MLS doesn’t have the cache to lead to jobs in Europe. It doesn’t have entry into the Champions League and Europa League that provides the stage for coaches from lesser regarded soccer countries to prove their abilities.

Marsch used the Red Bull family of clubs to push his way into Europe. Coaching in the Red Bull system put him on the radar of people like Rangick and opened the door for a chance at Red Bull Salzburg. Without that, we’d still be waiting for an American coach to get a chance in the Champions League. We’d still be waiting for the first win in the Champions League by an American head coach.

There’s value in Marsch coming out of the American soccer experience, without a more international background, and achieving an American first. There are other coaches in Europe with American connections, most notably Schalke 04 coach David Wagner, who might have gotten there ahead of Marsch. Those Americans count, too, but there’s nothing wrong with identifying the unique nature of Marsch’s arrival at this moment and taking pride in it.

American soccer’s reputation is still maturing. The thought leaders of the global game are those who manage the best teams in the world and who win games in the Champions League. There’s a long way to go before Marsch can be grouped among those coaches, but he has now taken the first step in that direction.

Marsch has ambition, a desire to learn and grow, and a demeanor that inspires confidence in his players. He’s adaptable, a trait that has served him well on his journey from Wisconsin to Salzburg. If anyone can navigate the cutthroat world of European management as an American, with all the baggage that identity entails, it’s Marsch.

To do that, Marsch will probably have to leave the Red Bull cocoon and strike out without institutional support of the organization that incubated his burgeoning career. Getting to that point will mean winning more than a single Champions League game, or even lifting the league title in Austria.

Marsch will need to spring a massive upset through the rest of the group stage to progress past this round of games. He’s confident. His team seems capable. That’s a good enough platform for a man just starting in Europe.

If he does get one of those upsets? Marsch would quickly go from up-and-coming American manager to rising star, regardless of his nationality. He’s not supposed to win, so there won’t be any shame in losing.