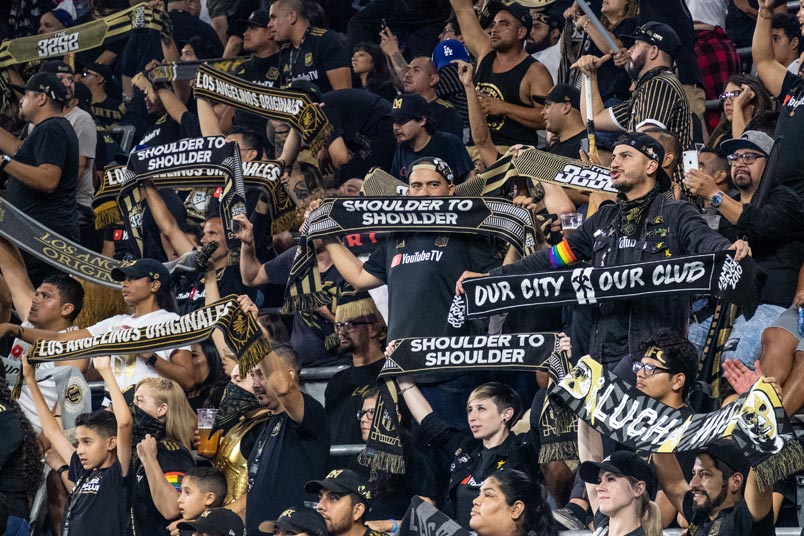 By Luis Bueno – RIVERSIDE, CA (Sep 18, 2019) US Soccer Players – The stretch run in MLS has arrived. Teams have a handful of matches left on their schedule and have scant few opportunities to snag points to make one last desperate push to make the playoffs or try and jockey for a better spot in the table. Then there’s LAFC.

The second-year club has four matches left and sits atop the Western Conference standings ahead of this final push. However, no matter what happens with LAFC or the other Western Conference clubs, the standings will not change at the top of the table. If 2nd-place Seattle wins out, for instance, and LAFC gets zero points the rest of the way, Seattle would get to within three points of LAFC but no closer.

Still, while LAFC does not need points to get in the playoffs or get into a better playoff position, the team has something that is perhaps more meaningful and more impactful over the long term at stake. LAFC has a chance to cement its name in MLS history.

LAFC is hands down the best team in MLS to this point. Whether the club will walk away with the MLS Cup remains to be seen. Whether the team can stake its claim as the best to ever play in MLS will be partially determined over the next three weeks.

Already the club has put together a masterpiece of a season. With a 19-4-7 record, LAFC has accumulated 64 points. Two wins or one win and an NYCFC loss would hand LAFC its first trophy, the Supporters’ Shield. That alone, of course, is not sending teams to the best all-time category. Since 2009, only the LA Galaxy’s 2011 and Toronto FC’s 2017 clubs have won both MLS Cup and the Supporters’ Shield. To be considered the best team in MLS history, it helps to have that particular piece of silverware.

LAFC needs two wins to join a rather exclusive club. Six more points would get LAFC to 70. Only one other team has reached the 70-point mark. Last year’s New York Red Bulls club who reached 71 points en route to winning the Supporters’ Shield. Curiously, the three highest point totals in league history have come in the last three seasons. Atlanta United finished with 69 points a year ago while Toronto FC had the same figure the year prior.

Perhaps it’s a sign of parody. With more clubs around, the product across the league becomes more diluted. That means more weak teams to beat up on. If LAFC were to finish with more than 71 points, the record may or may not stand for several years. That doesn’t make it any less impressive right now.

It would also help LAFC set another record that would probably better show the team’s dominance. Only seven teams in league history have finished at least 10 points ahead of the 2nd-place team in the conference standings at season’s end. Of those, the 2005 San Jose Earthquakes have the largest margin, 16 points clear of FC Dallas. DC United finished 13 points ahead of 2nd-place Columbus Crew both in 1998 and 1999.

LAFC sits 15 points ahead of Seattle with four games remaining. If the team can pick up two points on Seattle or 3rd-place Minnesota, LAFC will set a record that many probably are not even aware of or pay attention to. Still, it’s a better barometer of strength and dominance than the Supporters’ Shield. Four of the seven teams who have had such double-digit margins have reached MLS Cup with three of them winning it.

LAFC already has one record within its grasp, goal difference. Their +44 beats the 98 Galaxy’s +41, which up to now has been the league’s most prolific offense.

Perhaps the greatest record the team stands to break though is the all-time goals scored mark set by that same ‘98 Galaxy side. With players like Cobi Jones, Mauricio Cienfuegos, and Welton, the Galaxy scored 85 goals that season. While the Galaxy scored that figure in 32 games, two fewer than LAFC has scheduled this year, the goals figure will stand and be impressive no matter what.

LAFC has 77 goals thus far this season, already the second-highest total. Three more goals and the club would be the second to reach 80, which itself is an accomplishment that no other team may match soon if at all.

The conditions are set for LAFC to threaten or surpass all those records. LAFC will play three of its last four matches at Banc of California Stadium: Toronto FC on Saturday, Houston on September 25, and Colorado on October 6. The road match will be tough. LAFC visits Allianz Field to play Minnesota United on September 29.

Two of the three home rivals are not in playoff contention. Toronto FC is in 4th-place in the Eastern Conference table with a suspect defense. Toronto FC has just one shutout since May 18 and has allowed 49 goals this season. Houston and Colorado have even worse defenses. Colorado’s is particularly bad. The Rapids have allowed 58 goals this season, most in the Western Conference and second-most in the league behind FC Cincinnati.

LAFC also has the likely league Most Valuable Player on its side. Carlos Vela sits on 28 goals this season and is chasing the all-time mark set by Josef Martinez a year ago with 35 goals. Diego Rossi has chipped in 15 goals.

Of course, LAFC could break all these records and not win MLS Cup. Then, the team would be akin to the ‘98 Galaxy team, which might be, if not the best team, the most dominant team in league history to not win the championship.

If LAFC changes that by setting records and lifting the Cup, it will set them apart not just this season but in MLS history.