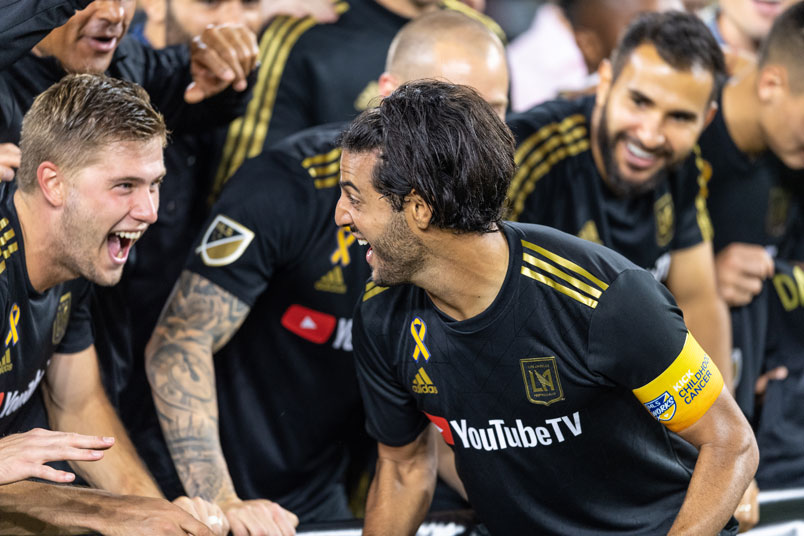 The soccer news starts in MLS with LAFC winning the 2019 Supporters' Shield by beating Houston 3-1 at home. Carlos Vela converted a 23rd minute penalty with an own-goal leveling the score in the 28th. Diego Rossi put LAFC ahead for good in the 70th with Eduard Atuesta scoring in the 82nd minute.

In the Eastern Conference, the title race is still open. NYCFC beat Atlanta United 4-1. Alexandru Mitrita scored for New York in the 14th, 23rd, and 34th minutes. Gonzalo Martinez converted an Atlanta penalty in the 53rd with Heber finishing off the NYCFC goals in the 87th minute.

Philadelphia moves into 2nd-place in the East with a 2-1 win at San Jose. Jackson Yueill put the Earthquakes up in the 35th minute and had a goal waived off for offside after video review. Alejandro Bedoya equalized in the 70th with Kacper Przybylko scoring in the 76th.

Minnesota came back to beat Sporting KC 2-1 at home to end Sporting's playoff chances. Botond Barath scored for Sporting in the 7th minute. Osvaldo Alonso equalized in the 70th with Hassani Dotson getting a goal for United in the 90th minute. Minnesota finished a man down with a red card to Chase Gasper for unsporting behavior four minutes into stoppage time.

The LA Galaxy beat Real Salt Lake 2-1 at Rio Tinto Stadium. Zlatan Ibrahimovic assisted on Cristian Pavon's goal in the 50th minute with Pavon assisting on Ibrahimovic's goal in the 80th. Nedum Onuoha scored for RSL in the 89th minute.

Portland and New England drew 2-2 at Providence Park. Jeremy Ebobisse scored for the Timbers in the 49th and 81st minutes. Gustavo Bou pulled a goal back for the Revs in the 87th with Carles Gil equalizing from the penalty spot seven minutes into stoppage time.

"Our players never quit and coming in at the end, was really incredible and as frustrated as our opponents are with the penalty kick at the end, it was a penalty kick," New England coach Bruce Arena said. "That’s one of the times that I would say VAR did its job the right way. And in all fairness to the referee, I know he took a lot of abuse at the end of the game but he did his job correctly."

NYCFC's lead is six games with two games remaining. Atlanta United is in 3rd-place, a point behind Philadelphia but can finish no higher than 2nd. Six of the seven Eastern Conference playoff spots are spoken for, with DC United, the Red Bulls, and Toronto rounding out the qualified teams. New England holds the 7th-place with a four-point lead over Chicago.

LAFC already had a lock on 1st-place in the West with Minnesota now in 2nd a point ahead of the LA Galaxy. Seattle is in 4th-place a point behind the Galaxy. 5th through 7th are still up for grabs with Real Salt Lake, Portland, and FC Dallas holding those spots but only three points separating 5th from 8th-place San Jose. All MLS teams are now on 32 games played.

Montreal won the Canadian Championship 3-1 on penalties after their series with Toronto finished 1-1 on aggregate. Toronto took the second-leg 1-0 at BMO Field to level that aggregate score and force the tiebreaker. Tsubasa Endoh scored for Toronto in the 70th minute with Chris Maving seeing red in the 84th for denying an obvious goal scoring opportunity. Toronto converted in the first round of penalties but a miss, a save, and a miss saw Montreal take the title.

In Europe, Christian Pulisic's Chelsea beat Grimsby Town 7-1 at home in the third round of the League Cup. Ross Barkley started the scoring for Chelsea in the 4th minute with Michy Batshuayi doubling the lead in the 7th. Grimsby Town scored in the 19th minute. PEdro converted a Chelsea penalty in the 43rd with Reece James adding a goal in the 82nd. Batshuayi scored again in the 86th with Callum Hudson-Odoi scoring in the 89th minute.

Matt Miazga's Reading lost 4-2 on penalties at Wolverhampton after finishing 1-1 in regulation. Trailing from the 27th minute, Lucas Boye equalized for Reading nine minutes into stoppage time. Miazga converted Reading's first penalty but they missed in the 2nd and 3rd rounds.

Staying with the cups, Erik Palmer-Brown subbed out in the 67th minute for Austria Wien's 5-2 home loss to WSG Wattens in the second round of the Austrian Cup. Trailing from the 10th minute, Christoph Monschein equalized for Wien in the 13th. WSG Wattens led 5-1 from the 70th with Monschein scored again in the 84th minute. Ethan Horvath was in goal and picked up the shutout in Club Brugge's 3-0 win at Franc Borains in the round of 32 of the Belgian Cup.

Aron Johannsson subbed on at halftime for Hammarby's 3-1 win at Sirius. Junior scored for Hammarby in the 53rd with Jeppe Anderson doubling the lead in the 68th. Muamer Tankovic made it 3-0 in the 74th. Sirius scored in the 85th minute. Sergino Dest subbed out in the 77th minute for Ajax's 5-0 home win over Fortuna Sittard. Quincy Promes scored in the 50th minute with David Neres doubling the elad in the 53rd. Promes scored again in the 78th with an own-goal making it 4-0 in the 77th. Promes finished his hat-trick in the 83rd minute.

Mix Diskerud subbed out in the 66th minute for Ulsan's 2-0 win at Suwon Bluewings. Kim Im-sung scored in the 49th with Junior Negrao getting a goal a minute into stoppage time.

BBC Sport with the proposed new stadium for the two Milan clubs. The Herald's James Cairney on what the new Europa Conference League could mean for a smaller league like Scotland's. Inside World Football's Andrew Warshaw reports on FIFA bringing changes to agent compensation to a vote.