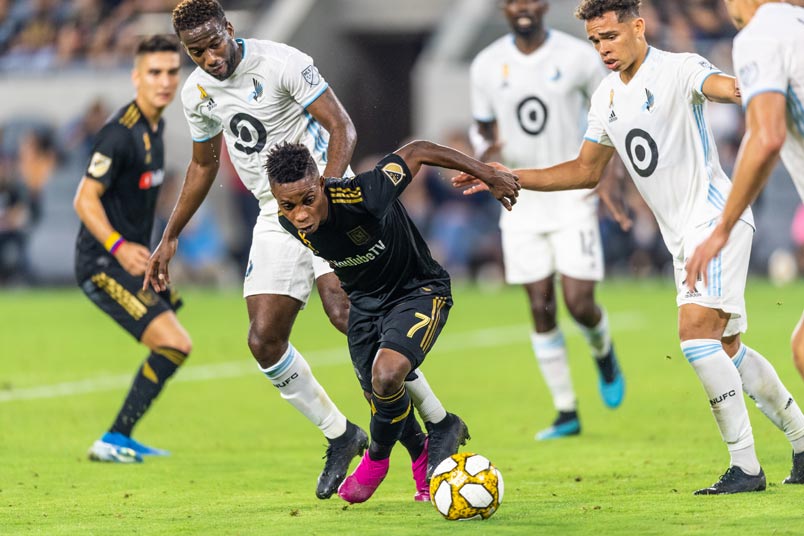 By Jason Davis – WASHINGTON, DC (Sep 4, 2019) US Soccer Players – The criticism was as easy as it was predictable. Following LAFC’s 2-0 loss to Minnesota United on Sunday night in Los Angeles, voices from many quarters declared the league’s best team so far in 2019 “average” in the absence of its Mexican superstar, Carlos Vela.

LAFC certainly did not look as dominant without Vela, who missed the game with a hamstring problem the club is attempting to prevent from becoming an injury. Despite taking 23 shots to Minnesota United’s five, with eight of them on goal, the league’s points leader could not find the back of the net. United goalkeeper Vito Mannone certainly played a role. Still, it’s a reasonable assumption that if Vela was on the field, LAFC would have scored.

United was happy to let LAFC have the ball on the road because they felt confident that they could defend an LAFC team missing Vela. LAFC outpassed Minnesota 811 to 245.

Vela is having a historically great MLS season at a time when the league is stronger than it has ever been before. Vela’s 27 goals would have been good enough to tie the record Josef Martinez beat last year. There’s a chance the Mexican could break Martinez’s record of 31 goals with a strong finish to the regular season.

Vela separates himself when we look beyond goals scored to goals created. To go with the 27 goals, Vela has 15 assists, earning him a record for combined goals and assists in a single season. Pulling apart how much of what Vela is doing in 2019 is the player and how much is a function of the very good team around him is difficult. What we can say for sure is that no one has had a season like this before.

Vela’s dominance as part of LAFC’s larger success isn’t a surprise. How good LAFC may or may not be without him? That’s the question. Soccer is a team sport, but Vela is an elite player in a league without a lot of them. The rest of LAFC is more than his supporting cast. On a different day, LAFC might beat Minnesota, even without Vela.

There’s talent in the LAFC squad, including the league’s fourth-leading scorer, Diego Rossi. Of course, the contributions of Rossi and his teammates came while playing alongside Vela. That prompts the very interesting and nearly unanswerable question of how good they might be relative to the rest of the league if they played in a team without Vela.

Bob Bradley is an excellent coach who will learn from the loss to Minnesota. It’s worth noting that it wasn’t just Vela who was missing at the start for LAFC. Mark-Anthony Kaye was on the bench at kickoff. He entered to start the second-half as part of Bradley’s bid to gain control of the game.

Kaye is an underrated part of LAFC’s success. He’s a midfield cog in a team that thrives on its ability to dictate terms in the center of the field. He, too, benefits from Vela’s presence, but it’s also true that Vela benefits from the work of Kaye behind him.

Identifying what missing pieces demand a change in approach for LAFC is a lesson that could be invaluable down the stretch of the season and into the MLS Cup playoffs. Minnesota United laid out a blueprint for beating a Vela-less LAFC team. It’s most simply described as playing with eight men behind the ball and victimizing LAFC on the counter. They highlighted how much the league-leaders miss out on the playmaking ability of Vela.

Deadline day signing Brian Rodriguez might be part of the answer. The Uruguayan teenager started in Vela’s stead. Though he wasn’t able to help his new team crack the Loons defense, he showed the sort of dynamic on-the-ball ability that will help LAFC weather any period without Vela.

LAFC’s struggles, such as they were, serve as a reminder that MLS is still a league that turns on a few elite players in every team. Even a club on a record-breaking pace for points and boasting a +44 goal differential carry with them a small margin for error.

That’s true during the regular season and will be true in this year’s edition of the playoffs. The new single-elimination playoff format will only heighten the chances that an organized lower seed with a well-designed plan can knock off a team that finished dramatically higher in the standings. Remove higher seed’s best player, and the chances improve dramatically.

Many teams around the world aren’t the same without their most influential creative player. What’s different is the strength of their alternatives. It’s always about depth in MLS. That’s where Bradley will earn his money. If he can work out how to win games without Vela, he’ll have a Plan B if and/or when things go awry in the postseason.

MLS introduced the Designated Player Rule to inject the league with star power. The Targeted Allocation Money initiative allows clubs to sign a higher caliber of players without trashing the sacrosanct element of parity. Both of those mechanisms worked in elevating the standard of play in MLS. They still don’t go far enough counteract the dependence of many clubs on one or two players.

Let’s not get ahead out ourselves. LAFC’s loss was surprising, but it was only one loss and in the regular season. Vela should to return to the lineup shortly. With him, the best team in MLS might not have to answer the question of whether it is the best team in MLS without the presumptive MVP.

Vela’s return and an LAFC championship won’t change reality for MLS teams. Lose your best player and, if not falling apart, then face becoming something different. Winning differently isn’t down to the freedom of countering the opponent with a tactically astute approach. It’s the result of a forced hand.

The distinctions are admittedly small. A positive result glosses over the methods. Last season Tata Martino remade Atlanta United for the playoffs and won a championship. Martino made that choice even with his best players on the field, proving that it’s complicated to advance in the MLS Cup playoffs no matter how ready you are for the tournament.

The gaps in the typical MLS roster are smaller than in the past, but they’re still there. LAFC knows that all too well. It’s a problem for MLS that will only improve if the league makes more money available to clubs to spend on quality throughout their rosters. Almost any club would suffer without its best player, but the degree of that suffering is entirely up to the league itself.