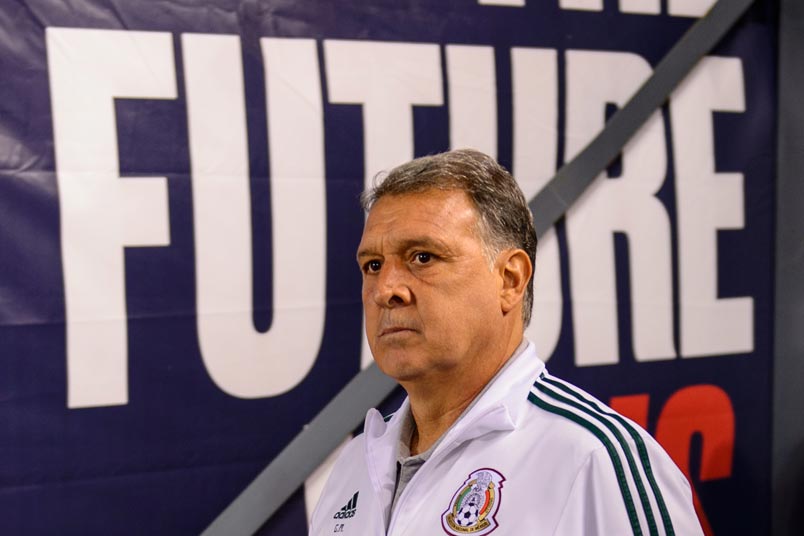 By Luis Bueno – RIVERSIDE, CA (Sep 11, 2019) US Soccer Players – Everything was going just fine for Mexico and coach Tata Martino. Entering Tuesday’s matchup against Argentina, Mexico had gone 10-0-1 in Martino’s first 11 games in charge. Even that draw was a win on penalties during the Gold Cup. All of that came to a sudden and jarring halt.

In a span of 16 minutes during the first-half, Argentina put four goals past Mexico and unearthed questions about El Tri. Argentina walked away with a 4-0 victory that threatens to send the team into a tailspin. This is the first time Mexico has faced real adversity under Martino. A few games prior had moments of it, certainly, but a loss of that magnitude was particularly brutal.

Ultimately though this match showed the downside of Mexico’s huge advantages. Mexico has grown too comfortable in its own environment. Playing soft opponents before large supportive crowds in mammoth NFL stadiums has not allowed for this team to play in adverse conditions. So when a quality rival the caliber of Argentina throws some real challenges Mexico’s way, the team has no idea how to react.

The conditions are far too favorable for Mexico when it takes the field for most of its matches. Unless the team faces more adversity in international friendlies – namely, playing quality European opponents on European soil – these types of defeats will only continue.

Everything Mexico has done to this point under Martino has been too comfortable. Mexico has yet to play with Martino in charge in a match outside of the United States. Mexico played all six friendly matches and the entirety of the Gold Cup on American soil. Mexico rarely plays friendly matches outside of the US, and many of its road games in CONCACAF are against weak opponents. Take, for instance, the first road rival on its calendar. Mexico will travel to Bermuda on October 11 to take on the locals in a CONCACAF Nations League match.

Mexico, of course, cannot control geography and force some strong nation into CONCACAF. What they can control is who they play in friendly matches. While the caliber of opponent has been decent in friendly matches this year playing Chile, Paraguay, the United States, and Argentina among others, the setting has been the same as it ever was. Tens of thousands of energetic and passionate Mexico fans in the stands, drowning out the small amount of rival supporters and pushing Mexico to perform on the field is what usually happens when Mexico plays games in the US.

While that is great for the players to experience, what would be even better would be for Mexico to be on the opposing side of that. If Mexico had its full roster at its disposal and Martino sent out a strong lineup to face a first-class rival on their turf in front of tens of thousands of their fans, Mexico would face the type of pressure that it cannot replicate at home or in practice. In unfamiliar and uncomfortable conditions against a strong team, Mexican players would have to react and perform or else the match would turn sideways very quickly.

That does not happen very often, however. Since 2014, Mexico has chosen to play in Europe just five times. They’ve only played four times in South America over that same span.

Before the 2018 World Cup, Mexico had three games on European soil. Two in November 2017 immediately after Mexico qualified for the tournament and another in June 2018, at Denmark on the way to Russia. The only other friendly games Mexico played in the Old World during that span was a pair of games in November 2014 when the team was transitioning out of one World Cup cycle and into another.

While Mexico plays South American opponents in friendly matches quite often, rarely do those games take place in South America. Since the end of the 2014 World Cup, Mexico has played just four friendly games in South America. Two in five days in 2015 and two games against Argentina four days apart in November 2018.

Mexico also does not play many friendly matches at home. El Tri played friendly games on home soil just seven times in the last six years. Two apiece in 2014 and 2015 and three in 2018.

Rather than play in Europe or South America or even at home, Mexico chooses to chase the dollar and play on American soil. Mexico has played 35 friendly games in the United States since 2014. That is a large number of games, matches in which Mexico enjoyed an overwhelming amount of support.

Perhaps the goal of friendly matches needs considering. If the purpose for friendly matches is to test the team and its players against the best rivals available, then Mexico should head to Europe and find teams to play against. A game in Europe against a mid-level rival is still a much better test than a game on American soil against a mid-level South American opponent. If the goal is to maximize funds and generate revenue, then playing in NFL stadiums makes the most sense.

Still, FIFA seems to be going away from international friendlies. The CONCACAF Nations League got underway during this most recent calendar. Mexico’s group, Group B, saw Bermuda and Panama play in what essentially was a home-and-home series. Panama won at Bermuda but shockingly lost at home, by 2-0 on September 8. Mexico will play at Bermuda on October 11 and host Panama on October 15 before visiting Panama on November 15 and hosting Bermuda on November 19.

The window to play European teams on their turf in friendly matches then may have closed. European teams are involved in their own Nations League as well as Euro 2020 qualifiers of late.

With the Nations League, at least Mexico will have to play outside of the United States. Four friendly games on American soil would have only served to earn money for the federation. Playing in the Nations League will at least force the team to play meaningful matches in adverse conditions. At least then Mexico will gain something it can use from its matches.