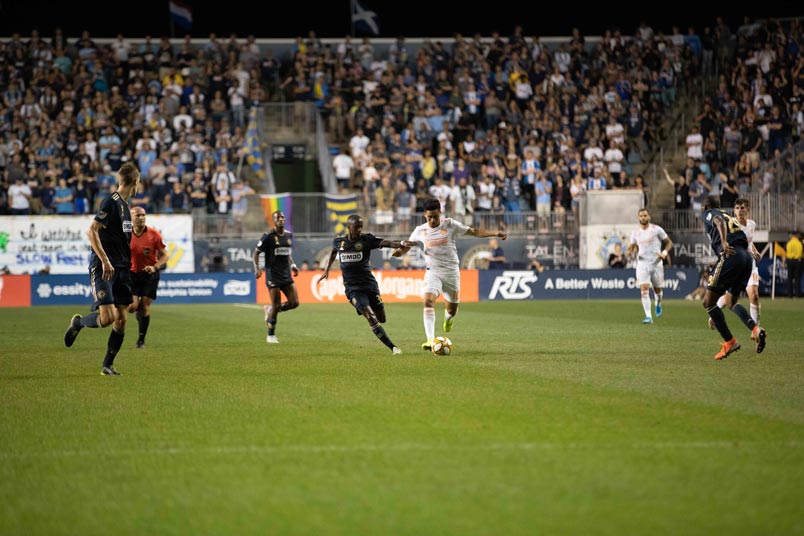 MLS got the games in prior to the September international break with Philadelphia taking over top spot in the Eastern Conference. The Union came back to beat Atlanta United 3-1 at home. Josef Martinez put Atlanta up in first-half stoppage time. Brenden Aaronson equalized for Philadelphia in the 61st with Kacper Przybylko scoring in the 86th. Przybylko assisted on Sergio Santos’s goal in the 88th minute.

“We’ve set ourselves up well now to host a home playoff game at this point and now we will have a real test,” Philadelphia coach Jim Curtin said. “I talked to you guys early on in the season, when you asked how good we were, I said I’d circle the Atlanta and the LAFC game to tell us because those are the two best teams. New York City as well, we have them coming in and then we’ll see what we’re all about, but as far as the first big test, we get an A+.”

Columbus and Chicago drew 1-1 at MAPFRE Stadium. Pedro Santos scored for the Crew in the 27th minute with Przemyslaw Frankowski equalizing four minutes into stoppage time.

“I think we all saw that we did a lot in this game,” Chicago coach Viljko Paunovic said. “Like always, not only did we put in the effort, not only did we create a lot of chances, but we also defended well. We were punished for one mistake and that happens to the teams that are playing with urgency like us. But we fought back in the second half and created a lot of opportunities. That’s the identity of our team, fighting until the end and creating a lot of attacking opportunities that are sometimes unbelievable to understand that we can miss those.”

New England and Toronto drew 1-1 at Gillette Stadium. Nicolas Benezet scored for Toronto in the 74th with Gustavo Bou equalizing in the 86th minute.

“I think it was just a matter of being better,” Bou said of the equalizer. “I think we just wanted a result overall. We knew we wanted to capitalize on having two games at home, especially after a result against Chicago last week. So, we just have to turn the page now and move on to next week.”

FC Dallas beat FC Cincinnati 3-1 at home. Ryan Hollingshead opened the scoring for Dallas in the 12th minute. Michael Barrios made it 2-0 in the 49th with Zdenek Ondrasek scoring in the 51st. Emmanuel Ledesma converted a Cincinnati penalty in the 64th minute. Cincinnati finished a man down with a 75th minute red card to Kekuta Manneh for violent conduct.

DC United shutout Montral 3-0 at Stade Saputo. Ola Kamara scored in the 20th minute with Paul Arriola doubling the lead in the 23rd. Kamara scored again in the 32nd minute. Bill Hamid made four saves to keep the clean sheet.

“Same as last week, the effort and giving nothing away defensively,” Melia said. “We still have a long way to go but we’re on the right track. We’re winning at home. We’re being really difficult to break down. And now we have a really important and really difficult task coming up against Portland.”

NYCFC beat Vancouver 3-1 at BC Place. Heber scored for City in the 10th minute with Gary Mackay-Steven doubling the lead in the 26th. Yordy Reyna pulled a goal back in the 64th. Alexandru Mitrita scored NYCFC’s third goal in the 72nd.

Portland shutout Real Salt Lake 1-0 at home. Diego Valeri scored in the 16th minute. Portland went a man down in stoppage time with a red card to Renzo Zambrano for abusive language. Steve Clark made six saves to keep the clean sheet.

“Massive win, because it was a win that we worked for,” Timbers coach Giovanni Savarese said. “Very proud of the effort put on the field. Real Salt Lake is a good team. They put some good challenges to us today, but I felt that the team was strong, united, didn’t allow too many options. Every time we had a player there to help and all around it was a great performance.”

San Jose shutout Orlando 3-0 at home. Magnus Eriksson scored in the 3rd minute with Chris Wondolowski adding goals in the 20th and 33rd. Daniel Vega made one save to keep the clean sheet.

“I think the effort we put in is the base of the team,” Earthquakes defender Marcos Lopez said. “Our companionship on the field and always fighting for a loose ball. I think that marks the difference against any opponent.”

On Sunday, Seattle beat the Galaxy 4-3 at CenturyLink Field. The Sounders took the lead with goals from Raul Ruidaz in first-half stoppage time and Cristian Roldan in the 55th. LA answered with Zlatan Ibrahimovic scoring in the 66th and assisting on Uriel Antuna’s goal in the 75th. Jordan Morris reinstated the Seattle lead in the 77th with Jorgen Skjelvik equalizing in the 81st. Ruidaz put Seattle up for good in the 89th minute.