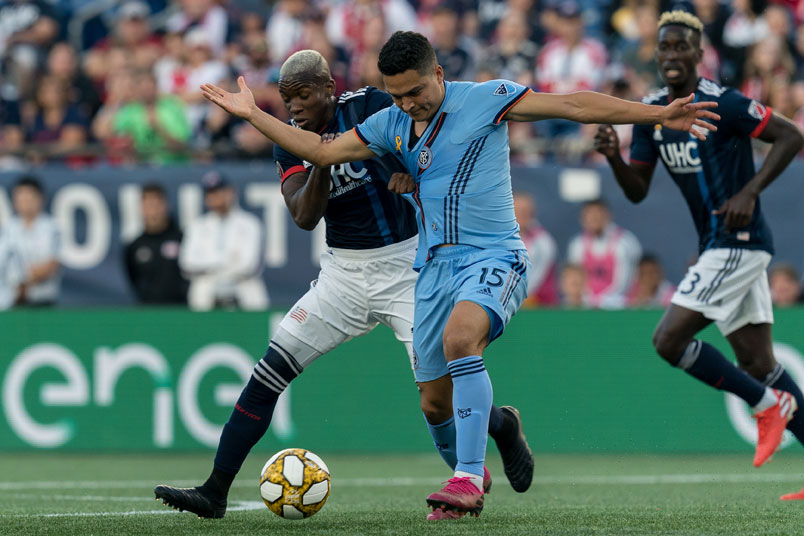 A week before decision day saw a confluence of results determine the Eastern Conference title. NYCFC lost at New England, but a Philadelphia loss means that City wins the East. They enter Decision Day with a six-point lead over Atlanta who are tied on points with the Union at 55 with United ahead 17 to 16 on total wins, the first tiebreaker.

The second to last matchday in the 2019 MLS season opened with Chicago and Toronto drawing 2-2 at what might be the last MLS game at SeatGeek Stadium. Jozy Altidore opened the scoring for Toronto in the 59th minute. Aleksandar Katai equalized in the 68th with Fabian Herbers putting the Fire up in the 77th minute. Omar Gonzalez equalized for Toronto in the 80th.

“Disappointed, obviously,” Chicago coach Veljko Paunovic said. “I think, today, one more game where we gave our best. That’s something that, it was always there this season and in the years behind us. I think that’s the first thing, a non-negotiable requirement to play for this team, and I think on that side, we did a good job. And I think today we also showed pride.”

FC Cincinnati and Orlando City drew 1-1 at Nippert Stadium. Allan Cruz scored for Cincinnati in the 40th with Benji Michel equalizing a minute into stoppage time.

Columbus shutout Philadelphia 2-0 at home. Youness Mokhtar scored in the 69th minute with Pedro Santos making it 2-0 in the 73rd. Eloy Room kept the clean sheet with three saves.

Montreal and Atlanta finished 1-1 at Stade Saputo. Julian Gressel put Atlanta up in the 53rd with Bojan equalizing in the 81st.

“We are disappointed that we tied the game,” Atlanta’s Michael Parkhurst said. “It’s a game we should have won and coming into the game, we wanted to win. It’s a better performance on the road than the last one. Montreal is a good team. It’s challenging to come up here and play.”

New England shutout NYCFC 2-0 at home. Teal Bunbury scored in the 66th with Gustavo Bou doubling the lead in the 89th. Matt Turner made six saves to keep the clean sheet. NYCFC officially clinched the Eastern Conference title and the Revolution became the final team in the East to qualify for the playoffs.

“They have surpassed my expectations” New England coach Bruce Arena said. “I thought we had a team that was better than the results at that time. We’re still getting to know players. We’re still learning about our players and they’re learning about us as a coaching staff, but we have a good, solid group. I wouldn’t think we’re going into the playoffs as the favorite, if I’m not mistaken. But, I think we have a good group of players. The goal is to keep getting them better.”

New York and DC United finished 0-0 at Red Bull Arena. The Red Bulls finished with three shots on goal to none for United.

“Whether we get into the playoffs, push for a playoff run and push for a championship, who knows,” Howard said. “The fact that we have meaningful games now says a lot. In July that wasn’t even feasable.”

Sporting KC and Portland finished 2-2 at Children’s Mercy Stadium. Sebastian Blanco put the Timbers up on the road in the 29th minute with Krisztian Nemeth equalizing in the 30th. Both teams went down a man with red cards to Portland’s Brian Fernandez and Sporting’s Roger Espinoza for violent conduct in the 36th and 38th minutes. Daniel Salloi put Sporting up in the 46th with Dairon Asprilla equalizing from the penalty spot in the 85th minute. Sporting’s Ilie Sanchez saw red in the 84th for denying an obvious goal scoring opportunity.

“They challenged us,” Portland coach Giovanni Savarese said. “We knew it was going to be like that. We followed it to the end. For us, of course we wanted the three points. The point is going to be very important for us and now we have another big, big match coming up next weekend. Finally, we got a PK that we deserved.”

Minnesota and LAFC drew 1-1 at Allianz Field. Carlos Vela scored for LAFC in the 70th minute with Michael Boxall equalizing in the 75th. Vela tied the MLS single-season goals record with a game remaining.

“We were just going for three points,” San Jose midfielder Shea Salinas said. “That’s what we came to do. Once the final whistle blew, it was disappointment, but everyone came in the locker room and said there’s still hope. Win and we’re in. We’re excited for that.”

All of the Eastern Conference playoff spots spoken for, though the order could change. In the West, 6th-place Portland and 7th-place Dallas have yet to clinch with 8th-place San Jose and Colorado still capable of finishing in a playoff spot as we head into next Sunday’s Decision Day.