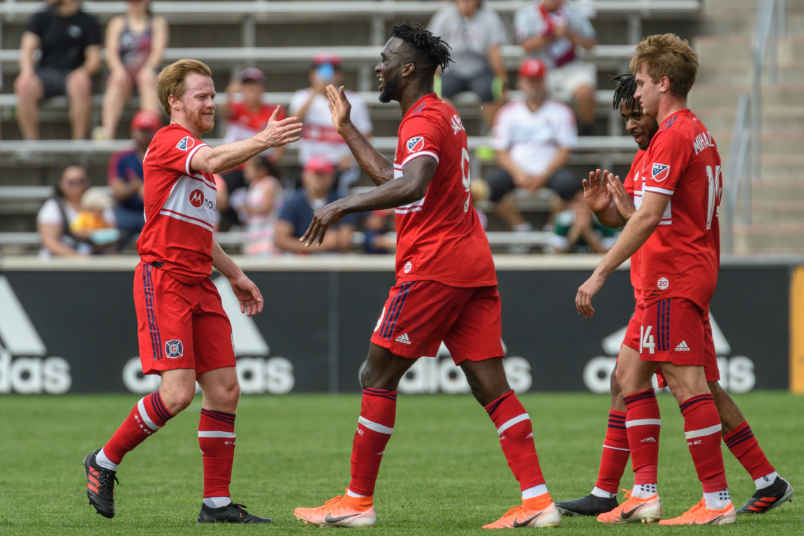 By Charles Boehm – WASHINGTON, DC (Sep 20, 2019) US Soccer Players – “Intense optimism and excitement.” “Some of the most exciting and inspiring team news in more than a decade.” “A moment of celebration for the Chicago Fire community the likes of which haven’t been experienced for quite some time.”

It’s not all that often that a soccer club makes a move that prompts its largest supporters’ group to issue an official press release with exuberant language like this. Yet, that was the case in the Windy City for Section 8 Chicago last week.

Chicago wasn’t announcing a glitzy new signing or putting playoff tickets on sale. They were revealing a transfer in majority ownership, with local billionaire Joe Mansueto buying up the remaining 51% of the club from Andrew Hauptman after purchasing a 49% stake last year. Simultaneously, the Men in Red officially confirmed the long-known fact that they will return downtown to Soldier Field next season after more than a decade at the soccer-specific but remotely-located SeatGeek Stadium.

Thus ends Hauptman’s 12-year stint in charge of the Fire. It was, by and large, a period of struggle in terms of on-field results and several contentious incidents between the club and its supporters’ groups. However, the appeal of the organization, its city, and its potential remains high enough that Mansueto reportedly paid around $320 million to take outright control. If accurate, that would mean Hauptman sold for nearly 10 times what he paid Anschutz Entertainment Group for it in 2007.

A segment of the Fire fanbase is pleased about the change in majority ownership. There are many reasons for that, most of them a product of the team’s results. Chicago advanced to the Eastern Conference final stage of the MLS Cup Playoffs three straight years from 2007-09. They’ve reached the postseason just twice in the nine years since, both of them one-and-done disappointments. Once dubbed “Kings of the Cup” winning four US Open Cup trophies in their first nine years of existence, the Fire have only reached one final in that tournament since.

“It was disappointing to see CFSC’s evolution go from being a dominant club in terms of performance and supporters’ culture to being an afterthought in recent years,” said Section 8 chair Nicole Hack in a conversation with USSoccerPlayers.com this week. “Fans have optimism with the change in ownership because we have a chance to regain some of that relevance.”

It wasn’t as if Hauptman refused to spend money on his team. The Fire have regularly ranked among the top five in MLS salary spending, acquiring marketable stars like Cuauhtemoc Blanco, Bastian Schweinsteiger, and the admittedly-far-less-productive Nery Castillo. While their current stadium’s exurban locale in Bridgeview, Illinois is an inconvenient, unglamorous corner of Chicagoland, fans have packed the place when the team was winning. It’s also worth noting that it is one of the only publicly-funded soccer stadiums in American history.

When a team is losing more than it’s winning, it tends to make everything else more difficult too. Such was the case with the Fire. Several years ago old-timers couldn’t help but take note when club legend DaMarcus Beasley’s name was misspelled on signage raised to pay tribute to him at SeatGeek, a small but perhaps symbolic oversight.

From the outside, it looks like the club is turning a page. There’s much work to do, but there’s a new eagerness surrounding MLS in Chicago. That may take time to show up in ticket sale, media coverage, and other metrics. One day after the changes were announced, Chicago drew the second-smallest crowd in MLS Week 28 on Saturday as they thumped FC Dallas 4-0 to keep their long shot playoff hopes alive.

Whether or not the Fire squeeze into the postseason, it’s 2020 that now looms. Moving to the lake shore will immediately make the Fire more accessible to millions of potential consumers. It’s also a hefty risk.

As iconic as it is in terms of history and location, Soldier Field is enormous by MLS standards seating over 66,000. Terms of rental with its owners the Chicago Park District are not particularly profit-friendly for the Fire, who are paying out $65 million to the village of Bridgeview just for the privilege of leaving. There’s a reason the club couldn’t wait to leave Lakeshore Drive at the start of the century. At the time, embracing distant Bridgeview made sense. Things have changed, but big stadium soccer is still an issue for MLS. Large crowds at Soldier Field for international games and club friendlies seem to be just as elusive for MLS as those in other big markets where the league grapples for a better foothold.

If the wider Chicago soccer scene doesn’t see evidence of a shift towards a positive trajectory, the current good vibes could well fade quickly. Journalist Brian Sandalow has watched and covered the team for years and suggests that the Fire’s window for a second chance is a small one.

“[President and GM] Nelson Rodriguez made a very astute point when he said that they recognize the move to Soldier Field is not a salve to all that ails them,” Sandalow told USSoccerPlayers.com this week. “If the team does not play well at the start of next year and they lose a bunch of games, lots of people will wonder if this was worth all the trouble.”

Hack doubts that moving downtown is a magic pill in terms of new fans. Still, she is encouraged by Mansueto’s initial words and general bearing. While cautioning that “it won’t happen overnight, and it needs to happen organically,” she believes that the healthy supporter culture of old can be regrown.

“Mansueto is local, so he’s able to engage with the community more, the city. He says he sees himself as being an engaged owner. Those are exciting things,” she said. “We have a new opportunity to focus on an academy, homegrown players, spending money on the right resources and players. We have a passionate Chicagoan, who from what he’s said, wants to grow a successful side in his city.”

MLS as a whole has a great interest in regaining prominence and vitality in the United States’ third-largest media market. League headquarters and other clubs will be watching keenly to see how Mansueto goes about the work of renovating the Fire. Success with that project could make Chicago a case study for reinvigorating the league’s approach to other underperforming outposts in big cities. It’s the job of Mansueto & company. to make sure it’s that it doesn’t become a cautionary tale.