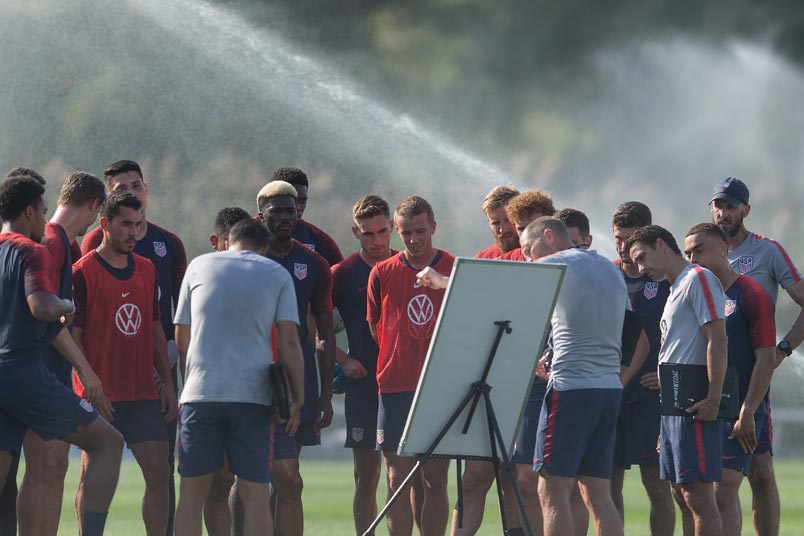 The USMNT returns to action on Friday (8:30pm – FS1) in an international friendly against Mexico at MetLife Stadium. For the USMNT, it’s another opportunity in the region’s biggest rivalry in an NFL stadium. Both teams are preparing to navigate the Nations League, a competition that just yesterday moved the finals from the March international window to June’s. There’s not a lot of unfamiliarity here in the big picture. The two teams last playing in the Gold Cup final on July 7. Mexico won the trophy 1-0 at Chicago’s Soldier Field, but things have changed in September.

USMNT coach Gregg Berhalter made it clear that players like Michael Bradley, Jozy Altidore, and Geoff Cameron weren’t in his squad due to MLS commitments. That’s the unnecessary complication of MLS not respecting the international windows. Toronto has games and the USMNT technical staff decided that took importance in the September window. What this does to the USMNT lineup should be interesting. Bradley and Altidore started the Gold Cup final with the USMNT much closer to first choice than Mexico.

Now, it’s the USMNT working in players and dealing with absences. 15 players return from the Gold Cup squad alongside Sergino Dest, Miles Robinson, Jesse Gonzalez, and Paxton Pomykal looking to win their first caps. How experimental Berhalter may be in September is one of the questions for this group. Uruguay waits on Tuesday, another high profile game where experience undoubtedly counts.

Against Mexico, the USMNT should once again embrace Berhalter’s commitment to tactical education. He’s made it clear since taking over the program that this is about doing the work to get the team playing a specific style. That normally means repetition among a core group of players. There’s not a lot of margin for error against a team like Mexico, especially this version of El Tri.

Mexico is stronger now than they were during the Gold Cup, welcoming back Chicharito Hernandez, Marco Fabian, Tecatito Corona, Hector Herrera, and Hirving Lozano. That means a different version of Mexico for Berhalter and the USMNT to figure out. Mexico’s attack benefits from the returning players, giving Tata Martino options he didn’t have during the Gold Cup. How he uses them in September may or may not mean much to the rest of Group B when that competition begins during the October international window.

This could potentially benefit the USMNT if it takes this version of Mexico longer to find its form. Mexico didn’t exactly dominate during the Gold Cup, an odd tournament disrupted by underdog stories. That Mexico ultimately recovered to win the title is only part of the story. Their missing parts mattered. Now that those players are back, it’s another restart for Martino. He’ll want a result, but like Berhalter he’ll also want progress towards a bigger project.

Ventura Alvarado wasn’t in the squad for Necaxa’s 0-0 home draw with Celaya in group F of the Copa MX.