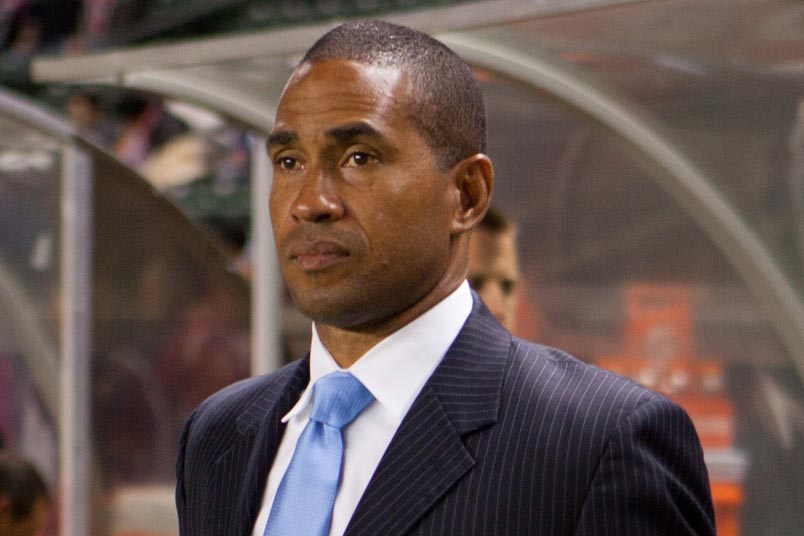 By Charles Boehm – WASHINGTON, DC (Sep 6, 2019) US Soccer Players – Labor Day Weekend served up several surprising results across MLS. One of the most unexpected was the Colorado Rapids’ efficient 2-0 road win over the New York Red Bulls, traditionally one of the league’s strongest sides at home. It marked a sweet debut for Robin Fraser, Colorado’s newly-hired head coach. The last time Fraser coached an MLS team was with Chivas USA in 2012.

It’s been a long wait for the former USMNT defender. In the interim, he’s built a reputation as one of the top assistants in MLS. Fraser played a part in two MLS Cup titles and one runner-up, two Supporters’ Shields-winning campaigns, and several playoff qualifications across stints at Real Salt Lake, the Red Bulls, and Toronto FC. As a result, he was a candidate for several MLS coaching vacancies as well as the Jamaican national team over the years, only for others to get the job time and again.

“I don’t really know what the difference was, to be honest,” he said of his selection by Colorado, where he aims to build a more proactive philosophy and possession-centric style. “I just presented to them how I look at the game and how I think the game should be developed, and what my ideas are in terms of both sides of the ball, offensively and defensively, and even, I suppose, in my approach to coaching/teaching. I don’t know if it was any different than I do with anyone else, but I’m certainly pleased that the opportunity came about. “You just go about your job day to day and do the best that you can, and you inquire about opportunities as things come up, and you just try to get yourself as prepared as possible for that time.”

Fraser is aware of MLS’s sparse, though arguably improving, track record with coaches of color. At the beginning of the current season, none of the league’s coaches were black, 13.6% were Latino, and another 9.1% belonging to other, non-Caucasian groups according to an annual study published by the Institute for Diversity and Ethics in Sport at the University of Central Florida.

He knows that the cold, hard numbers suggest that he’s a rarity. And that it’s quite possible that he’s carrying the prospects for future black coaches on his shoulders as he starts his work in Mile High Country. It’s just that there’s already so many other pressing items on his to-do list as he aims to turn around the fortunes of a club regarded by many as well behind the power curve in MLS. The Rapids have qualified for the postseason just three times since winning MLS Cup 2010 and typically rank among the league’s lowest spenders.

“I think the magnitude of the task is pretty immense as it is anyway,” said Fraser, whose ties to Colorado are deep enough for his recent move to constitute a homecoming. “Any coach that takes on any job – at the very least for your personal reasons and your own personal goals – it’s always going to be a big job. I don’t take it on any more, as such, that I’m carrying a torch. I want to do well and hopefully, if I am doing well, then maybe that makes a difference. Maybe more black coaches are given opportunities. But it’s one of many things that drives me, put it that way.”

It would be asking too much of one person to explain or undo a decades-long tradition of under-representation in US pro sports that transcends MLS and connects to some of the nation’s oldest and most taboo cultural issues. Conversely, it’s hard to pin this league’s shortage of diversity, especially relative to the makeup of its player pool, in technical and executive positions on any one simple cause.

“Certainly that is a well-spoken-about topic in the country and has been for a while,” said Fraser. “If you’re asking me why it is, I don’t really know the answer as to why that is. Obviously I feel privileged to have this position and not as a black coach, but as a coach. And I can confidently say that I think the best people need to be exposed to this sort of thing and to have the opportunities. I don’t know what the hiring processes are everywhere, but certainly I feel like as you’re looking for all the best coaches, you should be looking for the best coaches of all ethnicities.”

Fraser said he’s never experienced overt racial bias as a coach, “nothing that is verifiable”. He acknowledged that the turbulent wider politics of the moment can prompt troubling doubts.

“I’m sure people wonder why opportunities don’t go their way or why things don’t fall their way, and there are a number of different things you can look at,” he said. “Given the climate in the country now, it leads you to wonder about everything, doesn’t it?”

Following the lead of the NFL, MLS has a diversity hiring initiative on its books since 2007. The league requires member clubs to interview at least one minority candidate when filling coaching and other technical staff positions. Yet, the list of black coaches hired still contains only those five names along with Cobi Jones serving briefly as the LA Galaxy’s interim head coach in 2008. Then there’s the complete lack of women in those jobs.

As Fraser noted, it’s difficult to conclusively prove outright racism or collusion. The overwhelming trend of lack of representation in MLS makes a powerful point about what’s missing.

That leaves Fraser to roll up his sleeves and dive into the work at hand. The Rapids have a promising core of young talent to work with, and showed signs of revival under interim boss Conor Casey this summer after the departure of former coach Anthony Hudson. They’ll need to take several big steps forward to join the ranks of the MLS contenders, though. To say nothing of the elite.

“The goal,” said Fraser, “is to become a perennially quote-unquote successful team. You want to be a team that’s building something, building sustainable success, through the odd good player, a couple of good years or a good run, you can have good seasons here and there. But I think the measure of a club is its sustainability. The goal, obviously, is to get among the elite and to be able to stay there consistently over years.”