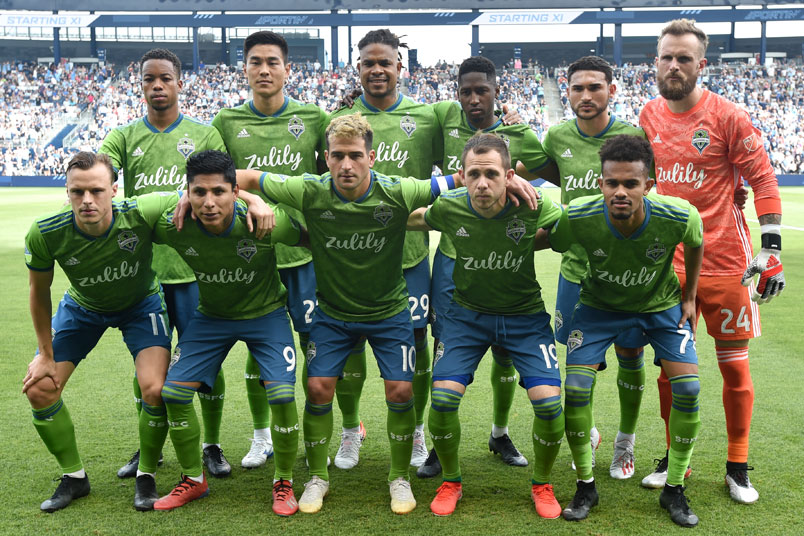 By Charles Boehm – WASHINGTON, DC (Sep 26, 2019) US Soccer Players – The away locker room at Audi Field was quiet. While grinning hockey star Alex Ovechkin and his entourage dropped in to congratulate the victorious home team across the hall, the Seattle Sounders were as subdued as you’d expect a losing team to be after DC United’s convincing 2-0 win.

It wasn’t a shocking result per se. The Cascadia side had to fly across the continent shortly after a midweek home draw with FC Dallas. They encountered unfamiliar levels of warmth and humidity in the nation’s capital, as well as an in-form DC team. Most importantly, Seattle traveled without their talisman midfielder and captain Nicolas Lodeiro due to a back injury, and it showed.

“One to forget,” said goalkeeper Stefan Frei. “It’s do or die right now. There’s not much room to fuss about or restructure things. It’s two games to go. The West is extremely tight, and positioning matters. At this point, I don’t really care how we get results. If it’s ugly, I don’t care.”

The Sounders’ frustration at Audi Field was about more than that night’s setback. After starting the year brightly with a 7-1-5 mark, they’ve gone 7-9-3 in league play since Memorial Day Weekend. Sunday’s loss was just the latest of many carelessly dropped points.

“Yeah, certainly,” said Seattle’s USMNT midfielder Cristian Roldan when asked if the new structure is playing on his team’s minds. “We haven’t capitalized on the opportunities that have been given to us. I think we’ve played almost last in every weekend and we’ve seen every result, almost, go our way. And it’s really unfortunate because we haven’t been able to take advantage of beating our Western Conference opponents…. It’s really tough to find the energy, but you have to push forward and take the opportunities.”

It seems that everyone in MLS has an eye on the scoreboard down the home stretch. Though they officially qualified for the postseason thanks to results elsewhere, Sunday’s loss left the Sounders vulnerable. Sure enough, the LA Galaxy and Minnesota United won at midweek to vault ahead of them in the standings. Now Seattle sits 4th, the lowest seed that confers first-round playoffs hosting rights. If their malaise deepens, they could slide further still.

It’s an uncomfortable place to be for a well-funded, well-supported club that has never missed the postseason in its MLS existence. This is a squad that once held ambitions of keeping pace with this year’s runaway league leaders LAFC. Now the weekend’s trip to San Jose and a Decision Day visit from Minnesota are Seattle’s last chances to improve their positioning. That may be a sign that the league’s playoff changes are working.

“In the past teams were able to sneak in and then have their home and away games and potentially even win the playoffs. I find that hard to believe that a team will be able to do that [now],” noted Frei. “It’s going to be a major feat if a team sneaks in and wins every game away and wins the cup.”

Seattle’s goalkeeper admitted that he likes the new format in philosophical terms, even as it threatens to bite his team.

“I definitely knew that our slow starts would not be acceptable with the rule changes [and] playoff format and was pleased for us to get a decent start to the season. But it makes it even more frustrating for us to have such a lackluster middle part of the season,” he said. “I think it’s a good move, because – obviously, coming from Europe – I think the season is most important. And so it puts more value on what you do during the season, puts more value on the Supporters’ Shield as well.”

Few can object to the MLS regular season holding more weight, an issue that dates back to the league’s founding. Eight of 10 teams qualified for the postseason in the inaugural year of 1996. That parity-driven mindset, which allows even the worst teams to stay in the picture until at least the home stretch, has persisted for the ensuing quarter-century. Even now a generous 14 playoff berths are on offer in a 24-team league. The regular-season champions have struggled enough over the years that the idea of a “Supporters’ Shield curse” has gained traction.

Yet, there’s a distinct sense among the protagonists that merely qualifying won’t be quite the golden ticket it once was. In this sequence of consequences, the next domino to fall appears to be strength in depth. Anyone with ambitions to finish in the upper echelons of the table will need contributions from up and down the roster to do so.

That remains a complex challenge under the stringent limitations of the salary budget. In spending terms, Seattle is a card-carrying member of the MLS elite. Their squad still isn’t quite luxurious enough to offer a like-for-like replacement for Lodeiro, an elite leader, playmaker, and tempo-setter with ample international credentials.

“It’s always hard to play your game without your most influential player and Nico’s that,” said Roldan. “Nico brings that energy, brings that spark, that creativity, that moment of brilliance that we lacked in this game. We’re definitely going to miss him, we’re not sure how long at this moment… in the end we have to move forward and play as if we’re going to miss him for the rest of the year.”

Frei was less inclined to lament the Uruguayan’s absence: “You’re always going to miss players. that’s just how it is. The next guy needs to step up, and if we don’t have a like for a like, maybe we have to figure out how we can play with the people we have available.”

Seattle prides itself on being pacesetters both on the field and off it. MLS Cup is generally seen as a realistic item on the to-do list every season. Is the fact that they find themselves mired in the thick of this playoff race a sign of their underachievement, a symptom of MLS’s enduring addiction to parity or a compliment to those who are running ahead of them? At the very least, we’ll know more in a few weeks.