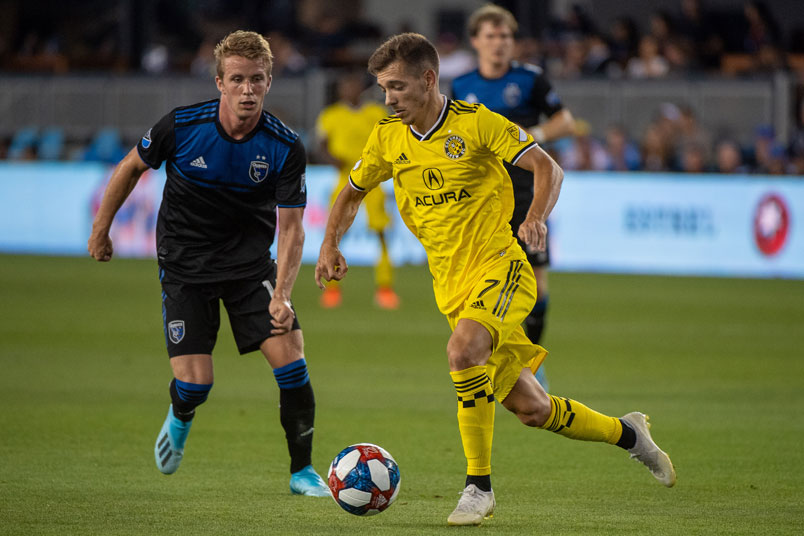 By Clemente Lisi – NEW YORK, NY (Sep 16, 2019) US Soccer Players – A visit to MAPFRE Stadium on a June afternoon brings with it all the energy and passion we’ve become accustomed to seeing at a soccer game in this country. An original MLS franchise dating back to the league’s inaugural season in 1996, the Columbus Crew are a big part of the story about the sport’s growth in this country.

MAPFRE Stadium is hallowed ground for US fans. Before taking on a corporate name, the venue was called Columbus Crew Stadium. Opened in 1999, it was the first soccer-specific stadium built by an MLS team. The move started a trend that continues to this day. It was also the place where the USMNT posted four consecutive 2-0 wins against Mexico in World Cup Qualifying from 2001 to 2013. The games became famous for their Dos a Cero scoreline.

It was that June 22 afternoon, where the Crew faced the visiting Sporting Kansas City, that revealed what more needs to be done to make Columbus a marquee soccer market. A healthy crowd of 14,015 fans in a venue that seats 20,000 greeted the teams. The sun-drenched stands was an indication this was going to be a fun day. With temperatures in the mid-80s, it was the perfect setting for a late afternoon game. In the bleachers, the crowd was enthusiastic. On the field, the team was overmatched.

Although June isn’t the time for teams to worry about the playoffs, the Crew needed a win. In 10th-place at the time, Columbus needed both the points and a morale boost ahead of what would be a very long summer. Instead, they played a man down from the 14th minute, eventually losing 1-0.

Over the next three months, the Crew would languish near the bottom of the table in 11th-place in the Eastern Conference with the third-worst points total in the league after FC Cincinnati and Vancouver. At this time last season, the Crew were contending for a playoff spot. They ended up finishing 5th, advancing to the conference semifinals. The entire time, Crew fans were protesting the club’s ownership and petitioning the league over the team’s possible move to Austin. All across Twitter, #SavetheCrew became a thing as Precourt Sports Ventures and MLS tried to work out a deal.

It wasn’t until December 28 that Crew fans got a late Christmas gift. MLS announced it had reached an agreement to transfer control of the team to another ownership group that was committed to keeping the team in Ohio, capping off what had been a yearlong drama. The new ownership group, led by Cleveland Browns owner Jimmy Haslam and the longtime Crew team physician Peter Edwards, officially took over in January. The departure of coach Gregg Berhalter for the USMNT and Porter’s arrival also meant that the team had to transition from one playing style to another. Add to that a relatively weak roster compared to other teams in the conference and injuries to several stars, including striker Federico Higuain, and the season looked lost even before summer began.

“The struggles this season are twofold,” said Patrick Guldan, managing editor of SB Nation’s Massive Report. “There wasn’t the guarantee of a team in Columbus until last October, and the new ownership took over in January. Ticket pushes didn’t start until nearly February. It was far too little time to undo the damage of the protracted uncertainty that the team was under in the final year of Precourt’s ownership. On the field, I think everyone underestimated the difference between Gregg Berhalter and Caleb Porter’s coaching style. Berhalter developed a programmatic system with complete buy in from his players. Porter plays a more expressive style. Additionally, several key players faced age-based decline.”

Still in 10th-place, Columbus is now six points out of the final playoff spot in the Eastern Conference with two games remaining. That may say more about the quality of the teams ahead of them, but the schedule will catch up with the Crew. It’s a “when” not an “if” that they’ll join FC Cincinnati with an “e” next to their name in the standings, officially eliminated from playoff contention. It’s worth the reminder that this is a team that beat Atlanta on September 14 and has only lost once in their last 11 games. What did the Crew in this season were two five-game losing streaks in April and May and again in June and July. Drawing five of their last eight games hasn’t helped push them up the table.

It’s true that the past was once uncertain for the Crew, but what about the future? It’s been nearly a year after MLS decided to keep the Crew in Ohio and the team continues to face serious obstacles. While no one expected the club to resolve lingering issues in a single season, the Crew remains a struggling team in search of ways to once again prosper.

What the Crew is focused on now is the long term. The team has already announced it will break ground on a new stadium on October 10 located in downtown Columbus. The new venue, which has a targeted completion date of summer 2021, is being built in the city’s Arena District. It’s already home to the NHL’s Columbus Blue Jackets and minor league baseball’s Clippers.

“On the field, the owners have pledged to spend money. They gave Porter a long-term deal to coach the team and have filled out the technical staff,” Guldan said. “They will spend on a designated player to headline a rebuilt offense, perhaps as soon as this off-season. With more talent, this team should rebound into the playoffs as soon as next year.”