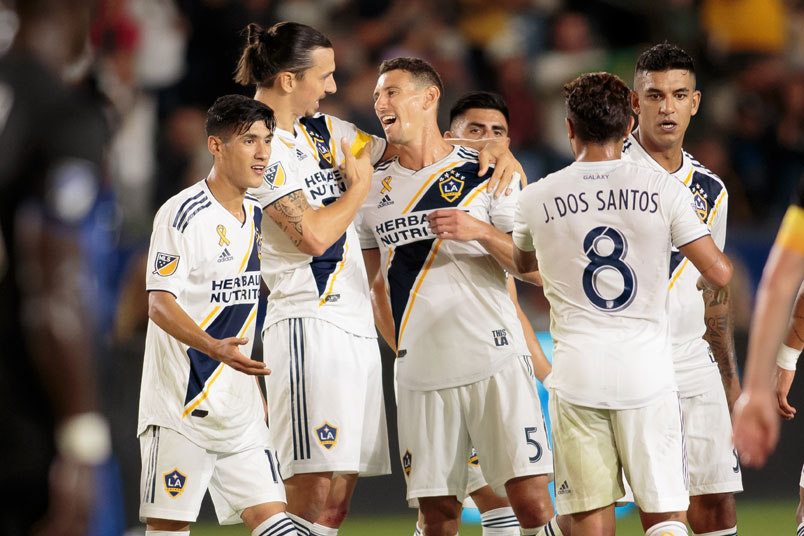 By Luis Bueno – RIVERSIDE, CA (Sep 25, 2019) US Soccer Players – The playoff format in MLS has been as stable as the number of teams in the league. Over the years, the league has featured knockout matches, two-leg series, three-leg series, and various methods of how to determine seeding and who plays home or away. At the end of 2018, MLS changed the playoffs yet again. This season, the system will now exclusively feature one-off matches and will cut short the length of the playoffs.

While the change in format is frustrating since there’s no continuity from one year to the next, this new system promises to ramp up the level of excitement. By cutting each series down to 90 minutes, each minute could potentially be the end of one team’s MLS Cup dreams. It’s that sort of intensity and high-stakes match that will keep LA soccer fans and, really, most of MLS hoping that this system produces an LAFC vs LA Galaxy matchup.

A winner-take-all match between LAFC and he Galaxy in the heart of Los Angeles would be worth MLS changing the playoff system. Partially because of the stellar regular season of LAFC and the great playoff history on the Galaxy, this Galaxy-LAFC seems quite possible.

This playoff system figures to be a boon for the city of Los Angeles. It will help keep the MLS teams in the spotlight in what will be a crowded sports calendar come October. Next month will feature quite a bit of action in Los Angeles. The LA Dodgers will try to reach the World Series for the third consecutive season. The LA Rams will only play once at home in October. The LA Chargers will play twice, including a home game against the Pittsburgh Steelers on October 13. It’s a game whose cheapest tickets are at $227 per StubHub as of Wednesday morning. The LA Kings’ home opener is on October 12, playing a total of six home games that month. The LA Lakers and LA Clippers meanwhile will tip off the NBA season against one another on October 22. That’s the debut of Kawhi Leonard as a member of the Clippers. There’s also UCLA and USC football to contend with. USC drew 55,719 to the LA Memorial Coliseum for a Friday night matchup against Utah.

MLS needs to be in that conversation. An LA derby in the playoffs would get them there. LA loves a spectacle and big moments. A winner advances playoff game between their two MLS teams gives them that. It’s something that hasn’t happened since 2009. With all due respect to Bob Bradley’s former club, everything about his LAFC this season raises the profile in a way Chivas USA never could.

That 2009 series also highlights the issue with home and away in the MLS playoffs. The first-leg, a 2-2 draw, was exciting enough. The second-leg was a drab 1-0 draw that saw both teams playing more tentatively than anything else. That became the hallmark of the two-leg series over the years, likely prompting MLS to consider a change.

LAFC has clinched 1st-place in the Western Conference and the first-round bye that goes with it. The top seven teams in each conference will reach the postseason. LAFC will play the 4-seed v 5-seed survivor while the 2-7 and 3-6 winners will play in the conference semifinals.

It would be better if Galaxy did not finish either 4th or 5th. It sets up an LAFC vs Galaxy game a round too early. If the playoffs started before Wednesday’s matches, the Galaxy would finish 4th and would play Real Salt Lake in the first round, with LAFC awaiting the winner. Of course, the Galaxy still must make the postseason for that to happen and there is no guarantee that the club will reach the postseason for the first time since 2016. The Galaxy has 48 points and is in 4th-place. San Jose and Portland are in a tie for 7th on 44 points. Just four points separate 4th-place and a playoff spot and 8th-place and a playoff miss.

The Galaxy has been stellar at home of late but has been terrible on the road over the last several months. The club has an 0-6-1 mark in its last seven road matches. Wednesday’s game is at Rio Tinto Stadium. The Galaxy finishes the season at Houston.

Still, the club is in line for a postseason berth and would begin its quest for a sixth MLS Cup appearance in earnest. Perhaps the only downside to the playoffs would be the calendar. No matter if the Galaxy and LAFC meet the games would be played midweek because of the cramped playoff schedule. Otherwise, the clubs are hopeful of battling for an MLS Cup spot and captivating the city of Los Angeles in the process.