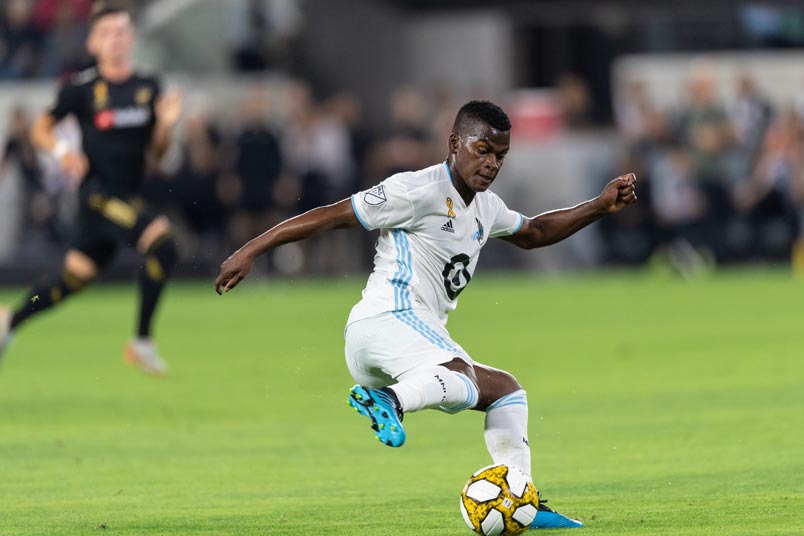 By Jason Davis – WASHINGTON, DC (Sep 13, 2019) US Soccer Players – “Playoff implications” is like magic. The phrase immediately increases the intensity of regular-season games that would otherwise lack for intrigue. It’s fair to say that it takes too long for Major League Soccer’s regular season to get to the point where the “playoff implications” magic cascades down over proceedings. When it finally shows up, games become meaningful, fraught, and often, surprising.

Week 28 of the MLS arrives with playoff implications aplenty. Nearly every game will have some bearing on the chase for either playoff berths, seeding, or both. Fresh off a round of four games in midweek, both the Eastern and Western Conferences have key games that will matter just a little bit more.

The marquee game of the weekend has Philadelphia in contention in the East hosting LAFC on their way to the Supporters’ Shield. NYCFC passed the Union for the top spot in the Eastern Conference with Atlanta United looming. LAFC has already sewn up the number one seed out west and does not have any competition for the points title. If the Union have any hope of catching New York City, they’ll need a win against the best team in the league.

Despite the lack of importance for LAFC beyond the quest for a record points total, Bob Bradley’s team has reason to want to send a message and return to form ahead of the final few games of the regular season. LAFC scraped a point from a visit to Orlando last Saturday night with a skeleton crew lineup heavily impacted by the international window.

The league’s best player in 2019 and the odds-on favorite to win MLS could make his return to the field after a few weeks sidelined by a hamstring injury. There’s no denying that LAFC missed Carlos Vela on the field in a surprising 2-0 loss to Minnesota United at Banc of California Stadium on September 2 or in the 2-2 draw against the Lions.

The Union have points to play for in the quest for a top seed in the East. They’ll also want to build on the confidence they earned beating Atlanta United in Chester last weekend. That victory felt momentous, like a coming-of-age for a club marked more by a cohesive mentality and contributions all over the field than by star power.

The inter-conference theme holds in another of the weekend’s big matches. DC United crosses the country to face the Portland Timbers at Providence Park.

United arrives off a two-week break over the international period. That should mean they’ll be plenty fresh but could carry some rust into the game. Wayne Rooney hasn’t played in a meaningful match in three weeks. An illness and a two-game suspension for a red card against the New York Red Bulls on August 21 kept him off the field.

DC’s swoon began before Rooney’s absence and ended before his return. United beat Montreal ahead of the international break that hit the brakes on a run that had them clinging desperately to their playoff hopes. Now in 5th-place, DC needs points to reclaim a top-four position and earn a home playoff game.

It’s the same scenario for the Timbers on Sunday. The defending Western Conference champions are smack in the midst of a run of home games that will determine their shot at the postseason. With the schedule so backloaded with home dates, Portland is a near-lock to make the playoffs.

Predictions don’t come true without some real-world quality and a little bit of luck. Portland’s 2-1 win over Sporting on September displayed both. After going down midway through the second-half, the Timbers scored two goals in the game’s final 10 minutes to grab three precious points. Failing to add three more points against DC isn’t acceptable.

It will be interesting to see who plays the aggressor at Providence Park. Neither club is particularly interested in taking the bulk of possession at the moment. Portland, because the Timbers are most devastating on the counterattack. DC both for that reason and because a muscular defend-first mentality is the simplest approach to take on the road playing on Portland’s artificial turf.

There’s another game on the schedule worth the attention. 2nd-place in the West is on the line with the playoff teams behind LAFC separated by four points. That means every week promises a reshuffling of the places fighting to get into the postseason party and earn a chance to host a soiree if and when they get there.

Minnesota United faces Real Salt Lake with a chance to reclaim the number two spot in the West. That would help solidify their credentials for dark horse MLS Cup contender in what promises to be a chaotic single-elimination tournament. The Loons have built something special at Allianz Field this year. They’re desperate to reward their fans with a playoff game in that building.

United welcomes RSL to town following a disappointing 2-0 loss in Houston. The Dynamo won’t make the playoffs and are largely playing for jobs in 2020, making the loss for Minnesota tough to swallow. Both teams will have back in the fold a bevy of internationals. That should help Minnesota cover for Darwin Quintero if he doesn’t return from an injury that kept him out of the lineup against Houston.

Real Salt Lake will quickly reintegrate three important attackers in Sam Johnson, Albert Rusnak, and Corey Baird. RSL shutout San Jose without those players on Wednesday. They’re a better team with them in the lineup, especially on the road against a solid Loons defense.

Both teams have underdog narratives to point to if they need any motivation to go for the win. Minnesota’s slow buildup to playoff contender means questions remain. RSL is working to prove that the shock firing of Mike Petke won’t upend their season.

These games count the same, but they mean more. That’s the magic of playoff implications in a league where regular season is a qualifying tournament. All involved knew that going in, and now is when they can make their seasons count. That’s what elevates the final two months of the MLS regular season. It makes everything more tense, more important, and more interesting. Like magic.