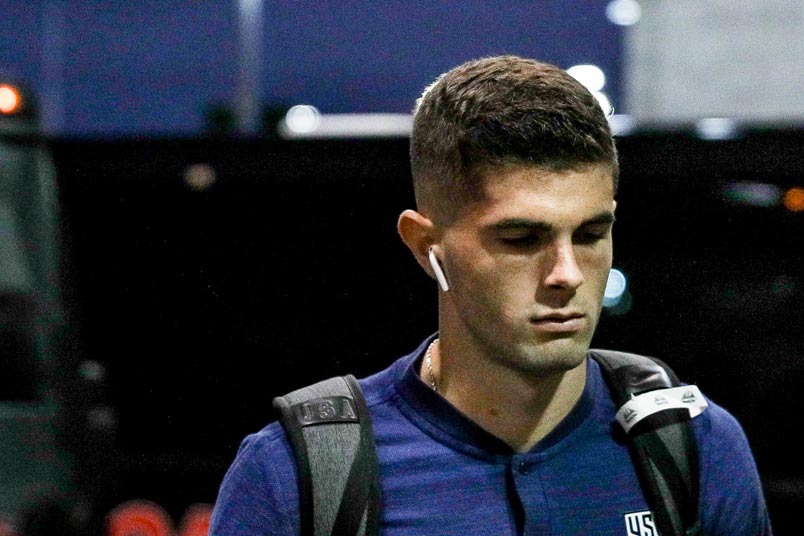 By Clemente Lisi – NEW YORK, NY (Sep 9, 2019) US Soccer Players – Chelsea is off to a rough start this season. After four games, the team is in 11th-place with just five points. For a club with ambitions of a top-four finish, that’s already a problem. New manager Frank Lampard still has the time to get things right. American fans are keeping a particular eye on Chelsea since Christian Pulisic joined the team.

Chelsea’s four Premier League matches are a small snapshot of what its season can be. Nonetheless, they give us a glimpse into what’s currently happening with the club and what they need to fix. Pulisic is on a new team in a new league, and early returns only reveal so much.

The stakes are high for all involved. Last week, Pulisic told reporters: “It’s amazing. It’s everything I hoped it would be and more. It’s incredible. They’ve helped me so much over there just getting accustomed to everything. It’s been great learning under Frank and playing with top players in the Premier League.”

All true. Pulisic, however, does have tough shoes to fill. He’s replacing Eden Hazard, a very talented player and arguably among the top 10 players on the planet. Pulisic played in all four Premier League games, recording an assist. He’s still looking for his first league goal, which could happen this coming Saturday away at Wolves. He left USMNT camp after the Mexico friendly to return early to club duty, meaning he won’t be available for Tuesday’s friendly against Uruguay.

The weight of expectation placed on Pulisic to succeed for both club and country has been without comparison. Writing for ESPN.com last month, Sam Borden noted: “Christian Pulisic is the most talented player in American soccer history. And, should he pull it off, what he is about to do – that is, play for Chelsea in the English Premier League – will be one of the most impressive feats in American sports history. Yes, Tim Howard played for Manchester United, but he was a goalkeeper; and yes, Clint Dempsey and Landon Donovan made the move to the EPL as well, but they debuted at smaller clubs in Fulham and Everton.”

How will Pulisic be able to succeed at such a high level? One way to explore that question is to look at Chelsea’s tactics. Lampard likes to employ the 4-3-3. It is under this tactical system that Pulisic is expected to thrive. As a winger, Pulisic’s exceptional first touch, speed, and dribbling skills are essential. His ability to quickly change direction and go 1v1 against defenders means Pulisic is expected to be very dangerous on the flanks as part of the front three.

Pulisic has been playing on the right, Hazard’s old position. Against Sheffield Wednesday in Chelsea’s last league match, Pulisic started alongside Mason Mount on the left and Tammy Abraham in the middle. The game ended 2-2 as Chelsea continued to struggle. The Blues’ starting lineup looked too young and inexperienced, at times, for the challenge. Still, Abraham, for example, does lead the team with four goals so far this season.

Like at every big European club, depth remains key. Pulisic will need to show that he can succeed alongside Abraham, Mount, or whoever Lampard decides to start up front. This is the elite level, where roles are always at risk. Lampard looked to have built his offense around Oliver Giroud, the experienced French star, but Lampard has appeared to have dropped him in favor of Abraham.

Whether Abraham can bring out the best in Pulisic and vice-versa is the question. The sample size of games this season is too small. Bigger games, including next week’s Champions League opener at Stamford Bridge against Valencia, will test Lampard’s theory as to whether younger is better. At the same time, the 32-year-old Giroud has said he has no qualms about a possible future move to MLS.

The pressure on Lampard to succeed is huge. Chelsea is known for managers coming and going. Lampard replaced Maurizio Sarri, who helped the team win the Europa League last season. When Sarri was lured back to Italy to coach Juventus, Chelsea signed Lampard, one of the faces of Chelsea’s success in recent decades.

Lampard won’t get the time to make too many mistakes. There’s no such thing as a rebuilding year for the Blues. Lampard’s 4-3-3 and the players he chooses to play have to quickly rise to the occasion.

This is both the tactics and environment Pulisic finds himself in. It won’t be easy. Pulisic has proven again and again that he can beat the odds, score those important goals, and belong in the conversation as one of the best players in American soccer history. By joining Chelsea, Pulisic made the choice for pressure.