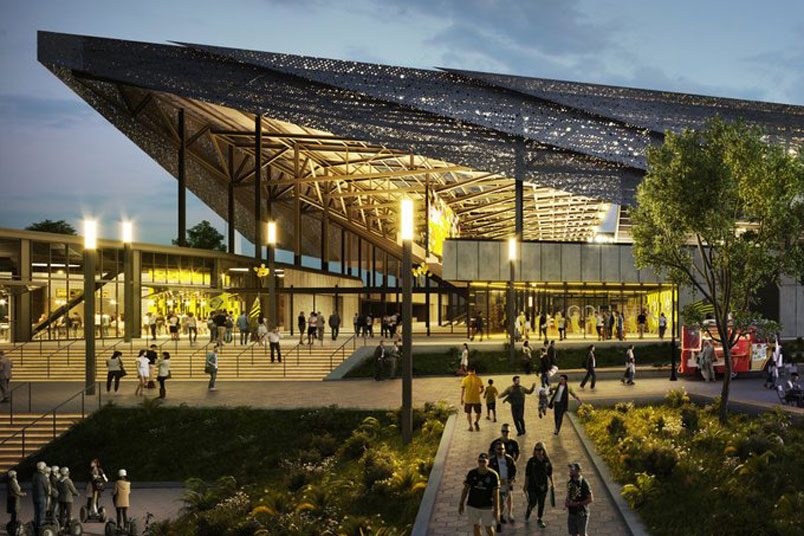 By Jason Davis – WASHINGTON, DC (Sep 25, 2019) US Soccer Players – If you subscribe to the right news feeds, you’re probably aware of the plans to build a new stadium for the Columbus Crew in the Arena District of Ohio’s capital city. New renderings of the building hit the internet on Tuesday to coincide with the team taking season-ticket deposits for the stadium’s planned 2021 opening.

The ceremonial groundbreaking is on the schedule for October 10. That day, like so many over the last year, will feel like a dream for Crew fans. It wasn’t that long ago that it looked like Columbus wouldn’t have a team, much less a brand new stadium. When construction is complete on the Arena District venue, it will make the Crew the only team in MLS to build two soccer-specific stadiums.

The new Crew stadium will come online in a busy year for the league. Austin FC will join MLS in 2021 with its own new soccer stadium, built on the north side of the Texan capital. Columbus opens their venue, born of the struggle to prevent Anthony Precourt from taking the Crew to Austin, in the same season that Precourt’s new team arrives on the stage.

2021 is a year ahead of Nashville SC debuting a planned stadium on the Tennessee state fairgrounds. Despite a head start on the process, the 2020 expansion club won’t get its venue open until 2022.

The most recent delay in Nashville is a product of greater ambition on the part of the new team. Nashville SC initially planned for a 27,500-seat stadium, a number big enough to put it in the top handful of stadiums in the league by size. Following a recalibration, the club is now moving forward on a plan for a stadium that will seat 30,000. That number that will make it the largest soccer-specific stadium in the country.

The increase in size equals a $50-70 million increase in the price tag and pushed delivery back again. The “again” points to the previous delays to Nashville’s stadium plans, born out of drags from lawsuits and the shifting nature of the vision for the venue. The fairgrounds site has many defenders in the community unwilling to give up on stopping a privately owned building from going up on publicly held land.

Nashville SC’s ownership, led by John Ingram and supported by the Wilf Family, is willing to foot the bill for the rising cost of construction. The first $225 million comes from Nashville’s Metro board, with the club’s owners stepping for any cost overruns. Enlarging the stadium from the original plans falls under that heading.

The local government’s commitment gives Ingram and his partners the freedom to think bigger. A 30,000-seat venue in Nashville figures to be in line for other games and non-soccer events. It’s difficult to see what the final product in Nashville will look like from the publicly available renderings. Like so many imagined stadiums, it is currently planning to have every seat covered by a roof.

If there’s one thing Columbus new stadium will have on Nashville’s, it’s location. While the fairgrounds are well within the “urban core” ideal that Major League Soccer pushes for its soccer stadium, it will be several miles from the city’s downtown areas. Nashville SC’s plans involve fostering a festive atmosphere, though it’s too early to know what that means.

Location is also not a strength of Inter Miami’s stadium plans. To call the situation in South Florida “messy” would be to undersell it. Despite Major League Soccer approving Miami’s entry into the League, David Beckham and his partners have not finalized a permanent stadium plan.

In Columbus, everything just seemed to snap into place, once the Haslam Family bought the Crew and local partners rose up to push the plan forward. In Miami, monied locally-based ownership has only served to get the 2020 expansion team part of the way down the path to a deal.

The contrast is stark. Inter Miami’s long, drawn-out saga chasing a site for an appropriate home has dampened expectations around the team. Though the rumor mill churns out new hints nearly every day on players and coaches the club might sign, there is little news on the Melreese/Freedom Park stadium front.

Inter Miami’s plan to play at a modular venue in Fort Lauderdale won’t help the club establish roots in Miami itself. It’s also likely going to be a tough sell for Miami soccer fans. Just like with the original Fusion, MLS didn’t expand to Miami to end up in Fort Lauderdale. It’s not the “urban core” of Miami. It’s not Miami at all.

Getting to Miami is the issue for the club. A self-imposed deadline for a lease proposal to the Miami City Commission came and went this month. Should that lease get approval in a city known for political infighting, there’s a location issue. The Melreese site is well-removed from what most consider Miami’s center. At least the Freedom Park plan looks impressive in renderings. Most MLS stadiums do, regardless of what gets built.

By this point in the MLS expansion era, delays and uncertainty are almost the expectation. They go right along with the stadium designs and graphics showing an idealized version of venues. That’s part of the process in Major League Soccer. Columbus is already the exception in saving the club from relocation. Maybe it’s also the club that will turn its stadium rendering into reality.

Rendering courtesy of the Columbus Crew