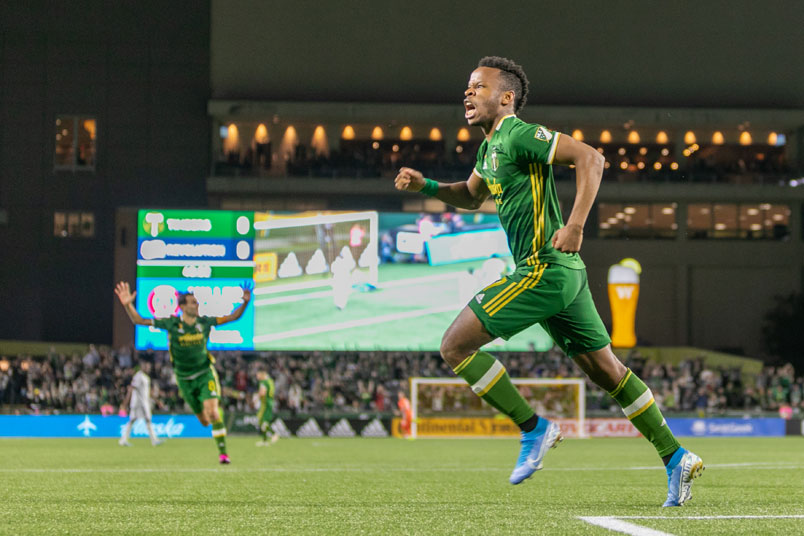 By Jason Davis – WASHINGTON, DC (Sep 27, 2019) US Soccer Players – The thing about bubbles is that they aren’t particularly stable. Every bubble rides the edge between existence and the decided lack of existing at all. One moment it’s there, the next, it’s gone.

Sitting on the bubble, in the common parlance of sports, is never a good thing. It means that your chances to qualify for the tournament, the World Cup, or the playoffs are perilous. A bad result or two and the whole thing could blink into nothingness.

Wednesday night’s results in Major League Soccer didn’t explode any bubbles. It did make life on the bubble just a little bit more tenuous for a pair of Western Conference teams.

Everything set up for the Portland Timbers to waltz into the 2019 MLS Cup playoffs. Perhaps as a high seed with the home advantage. A scheduled ten games in a row in Portland looked like the perfect runway for the club to defend its Western Conference title.

A funny thing happened on the way to the inevitable. Portland forgot how to score goals. Heading into Wednesday’s clash with the Revolution at Providence Park, the Timbers had gone three full games without putting the ball in the net. Chance-creation numbers indicated that things would eventually even out and the goals would come. Still, the small numbers of games left in the season ratcheted up the panic over the issue in the Rose City.

Glaring misses from forwards Jeremy Ebobisse and Brian Fernandez were like little cuts, each one doing a measure of harm to Portland’s playoff chances. Ahead of Wednesday’s match, the question was no longer what seed the Timbers would inevitably get in the postseason field. It was whether they would get there at all.

It’s somewhat stunning that the bubble is still there for Portland, still unpopped. It helps that some of the other teams in the West are doing their best to undermine their playoff credentials. It’s not just the Timbers that are flailing for points at just the wrong time.

Portland did finally manage to end the goal drought against the Revolution. Ebobisse stepped up with two goals, pushing the Timbers to a 2-0 lead entering the final 10 minutes of regular time. His efforts set up what looked to be a big win for his side and a reprieve from the pressure that a string of underwhelming home performances had placed on the club. Ebobisses’s contributions were much needed since Brain Fernandez missed the match with an illness.

The lead didn’t hold up. The Revolution first cut it in half through Gustavo Bou, finishing off a Teal Burbury cross in the 81st minute. New England’s breakthrough ended 80-plus minutes of frustration born of Steve Clark’s excellent play in net for the home team.

Then disaster with a dash of controversy struck for the Timbers. In the 96th minute, New England’s Wilfried Zahibo went down in the box, his body arching in the tell-tale manner of a player looking for a call. Although play initially continued, Jair Marrufo whistled for a stoppage of play to review the call through with VAR. A bit of embellishment or not, Marrufo decided that Portland’s Larrys Maibiala pulled on Zahibo’s jersey and committed a foul.

The Revs earned a penalty, which Carles Gil duly put away. Portland’s chance at three points evaporated. The result was especially galling for the Timbers. A similar sequence on the other end of the field earlier in the second-half, saw Jeremy Ebobisse’s jersey getting a good yank from Revs defender Brandon Bye. The difference is that Ebobisse didn’t go down and the referee didn’t point to the spot.

Things don’t get any less tense for the Timbers now. The bubble doesn’t get stronger. With three teams vying for the final two playoff spots in the West with two games to go, they still have a strong chance of making the playoffs. It’s far from a sure thing, though. Portland faces already-eliminated Sporting Kansas City on the road on Sunday. Decision Day sees them hosting San Jose.

The Quakes are treading lightly on their own MLS playoff bubble. The difference between the Timbers and the Quakes is that San Jose’s drama flows not just from the on-the-field performances, but the actions of their head coach. Matias Almeyda’s energy and passion are admirable. They were big factors in a midseason turnaround in Northern California. With the season coming down the wire, that energy and passion are turning into a problem.

Last weekend, Almeyda got his marching orders from referee Chris Penso in a loss to Atlanta United. He’ll miss at least one game with a suspension for the second time this season. Leading goalscorer Chris Wondolowski, already on the bench following his shift, earned himself a red card and a mandatory one-game suspension. Playmaker Cristian Espinoza was sent off early in the loss in Atlanta, making a trio of Quakes figures who would miss a match against Philadelphia on Wednesday night.

Wondolowski made the best of his situation by spending the match in the stands with the rabid supporters at Avaya Stadium. There were scenes of him ripping off his shirt when the Quakes took a first-half lead through Jackson Yueill. Passionate, sure, but his team could have used him on the field.

The running theory following the loss in Atlanta stated that the Quakes just needed to get back home. Road form was a problem. The club has been much more effective at Avaya Stadium than in opponents’ buildings in 2019. That theory fell apart quickly with the loss. Now, San Jose will have to come from outside of the playoff places in the final two games. It’s not an easy scenario.

San Jose hosts the Sounders on Sunday. Seattle is playing to guarantee a home playoff game for themselves and perhaps climb as high as 2nd-place. Decision Day is that trip to Portland.

Almeyda should be back this weekend. Key to his job is a return to normalcy for the Quakes. There are no more excuses left, not with the season down to the very end. San Jose is good enough to make the playoffs. They played themselves into this situation.

The bubble doesn’t discriminate. Portland and San Jose sit atop two of the most fragile bubbles in MLS. Will they burst?