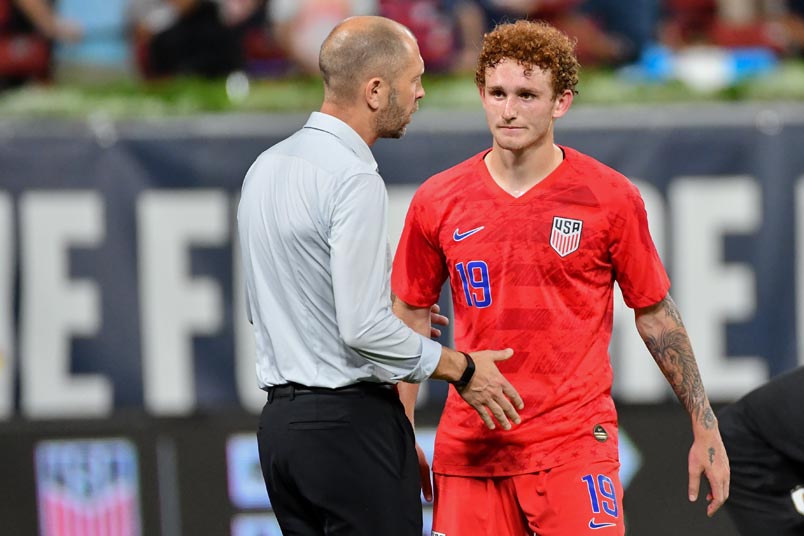 By Charles Boehm – WASHINGTON, DC (Sep 12, 2019) US Soccer Players - The USMNT got beaten by their main rival, then matched up stride-for-stride with global royalty. That's what the results of the past week's international friendlies vs. Mexico and Uruguay say on the scoreboard. They're also signposts amid a broader process of construction and education that is slated to continue into the foreseeable future, and pay off well down the road. Drilling down from there, plenty of other ideas and developments are worth discussing. Here's a few themes.

It's never good to lose to Mexico, regardless of circumstances. El Tri was the better team at MetLife Stadium. The USMNT's actions on the field and Gregg Berhalter's subsequent words provided tempering context on Friday's 3-0 loss, however. There was a marked insistence on continuing to play short from goal kicks and methodically build against the successful El Tri press.

You can certainly argue that Berhalter was headstrong or downright foolish to insist on this in such a meaningful game. Or that even slight adjustments in the run of play could've paid dividends in multiple ways. It's clear that his players tried faithfully to stick to the plan.

"We could've played to our forward a little bit more, play a little bit more direct, change it up a little bit," said goalkeeper Zack Steffen, who Mexico repeatedly put under pressure on the ball, afterward. "Obviously the scoreline is what it is, but we played the way we wanted to play."

Things went much better in many ways, tactical and otherwise, against Uruguay in St Louis. Even short of star names Luis Suarez and Edinson Cavani, La Celeste were strong adversaries. Their style also happened to give more breathing room for the buildups that the USMNT sought. They also counterattacked with great speed and efficiency, most fruitfully on Brian Rodriguez's goal. That was a reminder that turnovers against skilled opponents can be costly in any area of the pitch.

"To be honest I wasn't happy with our defensive transition today," said Berhalter. "Part of it is personnel… but they're smart players and it's just about being a little bit smarter in plays. [Before Uruguay's goal] we have a chance to foul that we don't do it, and then the recovery wasn't great and then we get isolated in the penalty box and the individual defending could've been better. But again this is something that against quality teams, you can get punished… in international soccer how there is a huge emphasis on defensive transition and for us it's about getting better in that phase of the game."

Was Berhalter being a methodical teacher to use the latest installment of the border rivalry as a de facto classroom, or an inflexible idealist? We've seen the angry short-term reactions, and they're not without merit.

Longtime Uruguay boss Oscar Tabarez is a living legend. He's steered his small nation to levels of success and competitiveness far beyond their size. On Tuesday, he showcased a few of the young talents rising through their ranks. Postgame, he offered up some thought-provoking perspective that US ears would do well to consider.

"I'm not saying this is the correct formula, but we've had success by linking our youth team processes with our senior national team," Tabarez said in remarks translated by The Athletic's Felipe Cardenas. "It becomes one national team. Unfortunately for many players, youth development ends at the U-20 level. Maybe the US doesn't have the history of Brazil, Argentina, or even Uruguay, a world power at the beginning of the 20th century. But a country with just 3.5 million people cannot be a world power. We have too many challenges. But in order to stay relevant, we defined a specific player profile — technically and personally and based on core values. We began to develop those players at the youth level."

After these games, Berhalter can point to some tangible developments along that line. Josh Sargent continues to impress with his #9 skillset. Sergino Dest started at left back in both games. While Dest was left exposed defensively here and there, his contributions to the attack, especially in pinched and inverted positions, were intriguing.

"Sergino is a guy who is a clever player. You talk about a player giving you solutions," said Berhalter. "He's a guy with a ton of confidence. It's nice to see a young player with that type of confidence and that type of ability to get up for games and perform for games."

The coach also clearly prioritizes deep-lying midfielders with broad passing range and vision. Particularly the big change-of-play switches that Wil Trapp and Michael Bradley are known for. Jackson Yueill also played to good effect in the first half vs Uruguay.

"We wanted to use our two center backs to find our holding midfielder now to draw that midfield line out, they had five in their midfield line, and trying to create movement in their defense. And Jackson did a good job, I think, looking for those diagonals," said Berhalter.

Tabarez adjusted his team's shape to compensate, sending bodies to close down Yueill's space. That too had an effect, as US center backs like Tim Ream and new arrival Miles Robinson stepped up to play incisive passes into the advanced midfielders, like the one to Cristian Roldan that eventually led to Jordan Morris' equalizer.

"The other thing we focused on was now trying to find the attacking midfielders in the pockets, and I think that's something we need to continue to work on – as he [Yueill] gets it from one side, can he quickly find that attacking midfielder between the lines?" continued Berhalter. "The space was condensed, and I think he did a good job of deciding if it's condensed to go behind their lines as well."

Yueill is just three caps into his senior international career but has thus far shown a skillset that could make him useful in Berhalter's system. A bigger question is whether Berhalter's setup provides enough defensive cover for the backline in that role along with the distribution qualities he likes.

Frustrated fans who advocate for wholesale changes in national team lineups are often disappointed. Most coaches, Berhalter included, prefer to mix in newcomers with familiar faces and contributors. That helps control variables for easier evaluations. It can also offer more stable platforms for individuals to show themselves. A similar mindset can be useful when evaluating Berhalter's ideas vs. his process and implementation.

Against Mexico Berhalter and his staff appeared content to concede in certain areas, namely the final score, in order to gather information in others. In St Louis, testing certain combinations and patterns of play exposed the USMNT on counterattacks. In both games, we saw that collective work is important, and also that individual moments of quality and assertiveness can trump it.

Uruguay's tactics and system set the stage for Rodriguez to show his speed and skill. Morris's goal looked fluky, yet was the end result of a well-conceived group sequence. The coaches' job is to build a platform that maximizes their players' qualities. It's up to the players to not only learn and execute their particular jobs, but also to recognize when to seize moments and make plays. That's an eternal push-pull within the sport. Berhalter is still in the process of proving that he's capable of overseeing both, at a high level, when it counts most.

"[Tuesday] was about the tenacity of our guys, the relentlessness of our guys to hang in there and keep battling," he said. "Uruguay is a team that fights for every single inch on the field. And we did a good job particularly in the first half of with keeping our structure, playing within the structure and breaking them down from within that structure."

CONCACAF Nations League matches in October and November are fully competitive fixtures. The trip to Toronto to face Canada promises to be a legitimate test. That's another audition, not only for USMNT players but the ideas and implementation of their coach.

Tyler Adams at RB Leipzig and what’s expected from Weston McKennie at Juventus are examples of US midfielders capable of playing multiple roles.