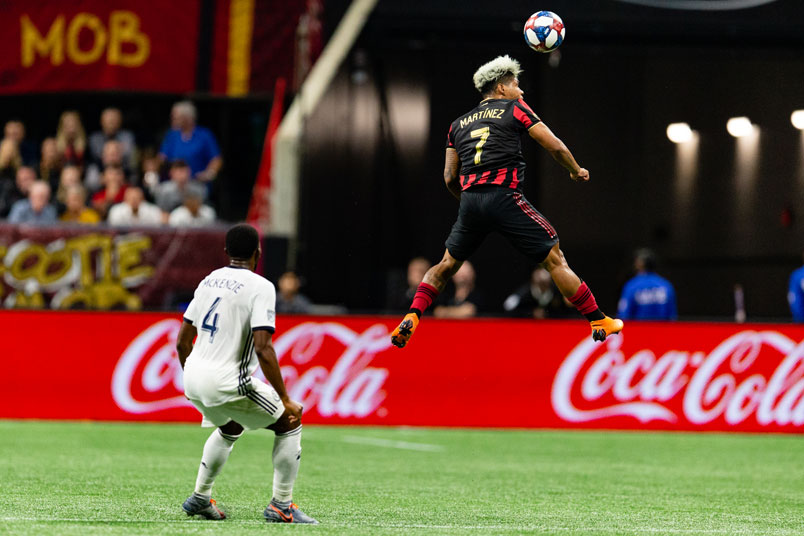 The soccer news starts with the MLS playoffs and Atlanta United claiming the other spot in the Eastern Conference finals. Atlanta knocked out Philadelphia 2-0 at home and will host Toronto on October 30 (8pm ET - FS1). Julian Gressel put United up in the 10th minute and assisted on Josef Martinez's goal in the 80th. Atlanta goalkeeper Brad Guzan made three saves to keep the clean sheet.

"The thing about these playoffs is that every game is going to present different challenges," Guzan said. "Toronto FC is going to present different challenges when they comehere compared to when they went to New York City last night. Toronto FC is a very good team. They are a team that has been in big games, played in international tournaments, and competed against the best teams in North America. They have a lot of experience all over the field, and it is not going to be easy, but it is one that I am excited for."

In the Western Conference, LAFC one the playoff edition of the LA derby knocking out the Galaxy 5-3 at Banc of California Stadium. Carlos Vela put the Galaxy up in the 16th minute, doubling the lead in the 40th. The Galaxy responded with a 41st minute goal from Cristian Pavon. Zlatan Ibrahimovic equalized in the 55th. Diego Rossi returned the LAFC lead in the 66th and assisted on Adama Diomande's goal in the 68th. Rolf Feltscher scored for the Galaxy in the 77th. Adama Diomande finished off the LAFC goals in the 80th minute. LAFC advances to play the Seattle Sounders on October 29 (10pm ET - ESPN).

Also in MLS news, the Montreal Impact announced that coach Wilmer Cabrera's contract was not renewed. Cabrera took over in late August after the club parted ways with Remi Garde.

"I want to thank the Montreal Impact for the two months I have spent in this beautiful city working with the club," Cabrera said. "Our agreement has ended, which from the beginning was only for two months. I feel proud that we have won the Canadian Championship, a title that the supporters and the club were looking to win since 2014. I wish the club all the best and I want to acknowledge the commitment and effort of its amazing players."

In the Europa League, Tyler Boyd subbed out in the 84th minute for Besiktas's 2-1 home loss to Braga. Trailing from the 38th minute, Umut Nayir equalized for Besiktas in the 71st. Braga went ahead for good in the 80th minute. Boyd saw yellow in the 83rd. Timmy Chandler subbed on in the 83rd minute for Eintracht's 2-1 home win over Standard Liege. David Abraham put Eintracht up in the 28th minute with Martin Hinteregger doubling the lead in the 73rd. Standard Liege pulled a goal back in the 82nd minute.

John Brooks was on the bench for Wolfsburg's 2-2 draw at Gent. Wout Weghorst put Wolfsburg up in the 3rd minute with Joao Victor doubling the lead in the 24th. Gent scored in the 41st and four minutes into stoppage time. Romain Gall was on the bench for Malmo's 2-1 home win over Lugano. Jo Inge Berget converted a 13th minute penalty for Malmo with Guillermo Molins making it 2-0 in the 32nd. Lugano scored in the 50th minute. Fabian Johnson wasn't in the squad for Gladbach's 1-1 draw at Roma. Trailing from the 32nd minute, Lars Stindl equalized for Gladbach five minutes into stoppage time.

The National's Richard Jolly makes the case for Leicester City as a top team in the Premier League. The Independent's Miguel Delaney on the manager situation at Spurs. Football 365's Seb Stafford-Bloor asks if Liverpool manager Jurgen Klopp is underrated as a tactician.