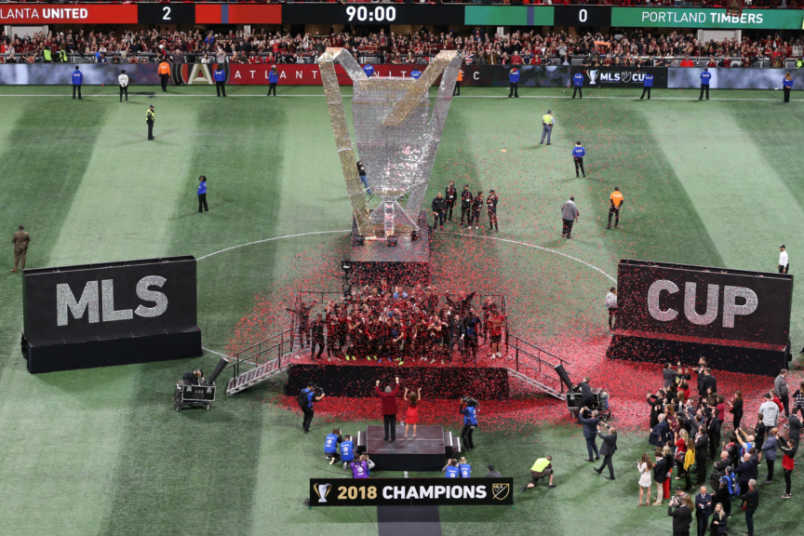 The soccer news starts with last year’s MLS champions. Atlanta United didn’t win the East in 2018, finishing second to the New York Red Bulls who also won the Supporters’ Shield. That meant a bye under the old system, with Atlanta waiting on the winner of the NYCFC vs Philadelphia knockout round game. NYCFC advanced, losing 1-0 to Atlanta at Yankee Stadium and 3-1 at Mercedes-Benz Stadium. Atlanta then beat the Red Bulls 3-0 at home, losing the second-leg 1-0 at Red Bull Arena.

Atlanta won 4-1 in the Eastern Conference semifinals and 3-1 in the Conference finals before shutting out Portland 2-0 to lift the MLS Cup. It was a dominant playoff run, showing the class distinction between United and the rest of the East in a season when the Eastern Conference was stronger than the West. Even with the Red Bulls entering the playoffs as the top seed, it also wasn’t much of a surprise. Atlanta had the league’s leading scorer and that sizable home field advantage.

This season Atlanta also enters the playoffs as the 2nd seed in the East. That no longer means a bye, with Atlanta facing off against 7th-seed New England. In the other half of their bracket is Philadelphia vs the Red Bulls with Atlanta holding home field advantage until the conference finals should top seed NYCFC advance. If the Eastern Conference produces a 1st vs 2nd final, home field might mean the Mets stadium in New York with the Yankees in the MLB playoffs taking precedence at the stadium named after the primary tenant.

Whether or not that clears the runway for this version of Atlanta is the question. This team struggled early under new coach Frank de Boer and without Miguel Almiron who left for the Premier League with Newcastle. Eventually, the 2019 version of Atlanta looked like what we saw in 2018. That included late season issues that kept them from winning the East. With NYCFC’s venue issues enough to derail a playoff run and Atlanta once again leaning on the best home field advantage in MLS, it’s tough to see them as anything but the favorite all the way through the Eastern Conference field.

What’s changed more than Atlanta this season is the other side of the bracket. Supporters’ Shield winners LAFC has their own home field advantage and the proof that they can beat any team in this league. Last season’s playoff loss to Real Salt Lake won’t loom. This version of LAFC knows better, benefiting more than any team with the changes to the playoffs. For all the work Atlanta did this season to get back into contention, LAFC is the insurmountable obstacle. Upsets happen, and the best case for Atlanta United is that it’s a Western Conference team pulling off that upset at Bank of California Stadium.

The Telegraph’s Alistair Tweedale on expected goals in the Premier League. World Soccer’s Paddy Agnew and Juventus once again top of the Serie A table. Inside World Football’s Paul Nicholson with Serie A opening a US office. ESPN’s Tim Vickery looks at Argentina’s situation, spending the October window in Europe. BBC Sport’s Phil Dawkes reports on soccer tourism.