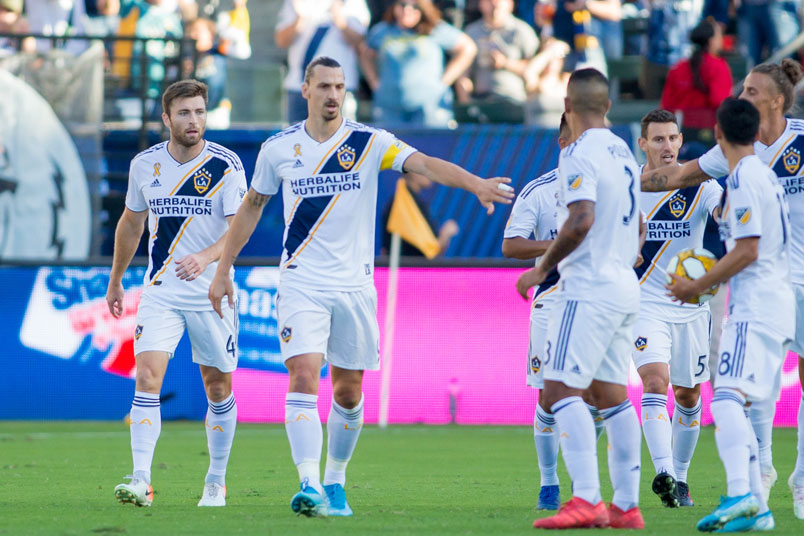 By Luis Bueno – RIVERSIDE, CA (Oct 16, 2019) US Soccer Players – Major League Soccer has seen some amazing players compete in the league and defend one of its clubs’ colors. Ask ten different people, and you will get ten different Best XI lineups. Trying to narrow all those players down to one all-time best MLS player? Nearly impossible. There is one person, though, who seems quite certain about who Major League Soccer’s all-time best player is.

“I think I am the best ever to play in MLS,” LA Galaxy star Zlatan Ibrahimovic said after a recent match. “And that is without joking.”

Not one to shy away from the spotlight, Ibrahimovic was his usual bold self when he made this proclamation after the LA Galaxy’s 7-2 win over Sporting KC last month. The opposite of humble, Ibrahimovic had just had a hat-trick against one of the worst teams in the league and felt like punctuating the team with that particular sentiment.

“I’m here to perform and show everybody what the game is about,” he added. “I think the two years I’ve had here. I’ve done good things. Amazing things. Perfect things.”

Perfect? It’s been far from that, but he has been a remarkable player. But the best? The best players in MLS history have championships, so until Ibrahimovic hoists the MLS Cup trophy at season’s end, his claim will be just talk.

The unfortunate thing for Ibrahimovic is that he has constant reminders around him of some of the best players to ever play in MLS. Several of them played for the LA Galaxy. Landon Donovan, Robbie Keane, and David Beckham, for starters, are among the best players in league history. All have won multiple MLS Cup titles. A player cannot claim he is the best in league history while playing for the Galaxy and not having an MLS Cup title to show for his efforts.

Of course, Ibrahimovic has less of a sample size as the former Galaxy players. Ibrahimovic just completed his second regular season with the team and his first full season. When he plays in Sunday’s playoff match, it will be his first experience in an MLS postseason game. Ibrahimovic came in during one of the Galaxy’s darkest hours as the club last played a postseason match in 2016.

As the self-proclaimed best-ever player in league history, the pressure is on Ibrahimovic to bring home the Galaxy’s sixth title. He has a strong case for doing just that. Ibrahimovic had an amazing regular-season campaign. He scored 30 goals this season, becoming just the third player in league history to hit that mark. Perhaps in most other seasons, he would have drawn the attention of the entire league. Instead, crosstown star Carlos Vela of LAFC found the back of the net 34 times. That happened one year after Atlanta’s Josef Martinez scored 31 goals, which set a short-lived record.

Regardless, Ibrahimovic’s mark was astounding. So strong was his campaign that he may have a good case for the league’s Most Valuable Player award. The Galaxy was a bit of a middling outfit this season even with him around. The Galaxy had a 15-16-3 record and lost ten games on the road, including a 1-7-1 road record in its last nine away contests. Ibrahimovic scored five goals in those games. Had the Galaxy done better in that stretch, perhaps the team could have finished higher than 5th. Still, without him, the team likely would not have even reached the postseason. The team’s second-leading goal scorer was Uriel Antuna, scoring six goals in 31 games. That’s not exactly the strong second striker support necessary of top teams.

Of course, Cristian Pavon scored three goals in 11 games. He’s given the Galaxy a boost since arriving from Boca Juniors during the summer transfer window.

Still, it’s the supposed all-time best player who will dictate how far the Galaxy goes this offseason. First up will be a tricky game at Minnesota United. In its third year in MLS, Minnesota United will be playing in its first-ever playoff game. Normally, that would be a gimmie for the seasoned LA Galaxy. Instead, this LA Galaxy team has just three players on the team who suited up for the Galaxy’s previous playoff match, a penalty-kick loss at Colorado in late 2016 – Sebastian Lletget, Dave Romney and Daniel Steres.

With little carryover from that side, it’s anyone’s guess how this Galaxy team will do in the tough moments. Previous teams, with players like Donovan and Keane on the roster, could rally around those veterans in tough times and rely on them to carry the team through.

Ibrahimovic has not yet faced situations like that. Sure, he had a double against LAFC and nearly helped the Galaxy beat the crosstown rivals in the clubs’ second meeting of the year, which finished in a 2-2 draw. Ibrahimovic did help bury LAFC the first time the teams met with a hat-trick in the Galaxy’s 3-2 win.

Regular-season matches are one thing. Postseason games are quite another. Ibrahimovic has played in big games before. A veteran of Italy’s Serie A, Spain’s La Liga, and the English Premier League, Ibrahimovic he’s used to the spotlight and performing under a microscope that’s far from the norm in MLS.

If he finishes this year as a champion, then he can be part of the conversation about the league’s best-ever player. Even then he will have a hard time topping Donovan, Keane and Beckham. Without an MLS Cup title, he would be better served letting others make his case.