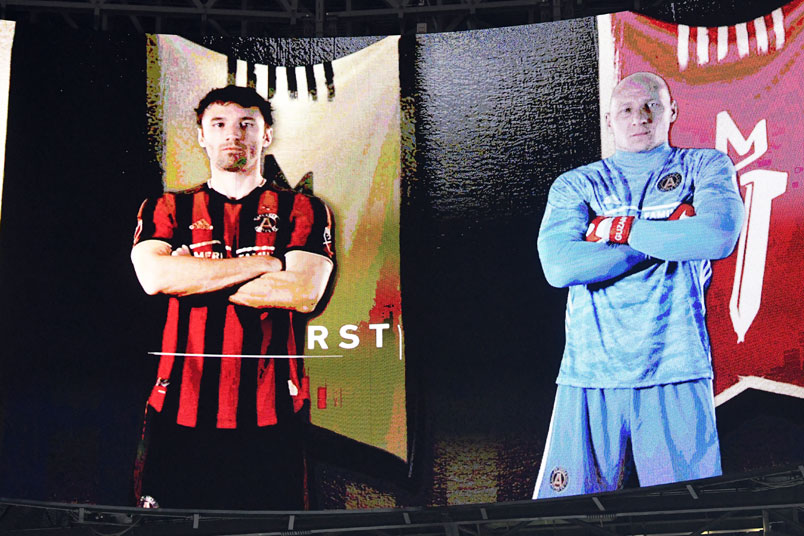 By Clemente Lisi – NEW YORK, NY (Oct 21, 2019) US Soccer Players – The MLS Cup Playoffs have brought with it drama and excitement in what is now a single-elimination tournament. That also means a newfound urgency and with it new tactics. This fall has brought with it a set of tactical trends that differs from the regular season. It’s the type of thing to expect from do-or-die games at this level. The stakes have never been higher for the 14 teams competing for the two spots in the MLS Cup Final.

Decision Day was a chance for coaches to test new tactics ahead of the playoffs. For example, Gerardo Martino made some tweaks heading into the playoffs last year, turning his typical 3-5-2 formation into a 5-3-2 to reinforce the defense. The changes worked, and Atlanta United FC won MLS Cup.

This year’s coach, Frank de Boer, did the same. He made tweaks against the New England Revolution in the team’s final game of the regular season by using a 3-1-4-2 ahead of the playoff rematch on Saturday. De Boer has used the 3-5-2 and 3-4-3 at various stages of the regular season. These formations have given the team a different shape with a stronger defense and more width through wingbacks like Julian Gressel.

The only thing remaining unchanged for Atlanta is the attack. The formation typically features two strikers led by Josef Martinez. Against the Revs the second time around, the 2nd-seed in the Eastern Conference downed New England by the narrowest of margins at home Saturday. The 1-0 result highlighted a frustrating night for Atlanta. In the end, de Boer’s 3-4-2-1, another formation change, won out. Martinez as the sole striker only took two shots in a frustrating game.

It was a defender eventually making the difference. Franco Escobar zooming down the right flank resolved the match 20 minutes from the end. A lovely pass from Barco, starting over fellow DP Pity Martinez, setup the goal. A win is a win in the playoffs.

“I have to make decisions,” De Boer told MLSSoccer.com after the win. “Right now, I think, with the three in midfield of Emerson Hyndman, Jeff (Larentowicz) and Darlington (Nagbe) is a good balance. Then, I have one spare spot left in that position and that’s either Barco or Pity. Now I’m choosing for Barco and he is doing well. I have choices always, but for me, I didn’t have any reasons to change him for Pity.”

In Seattle, coach Brian Schmetzer also made some tweaks near the end of the regular season in preparation for the playoffs. The 2nd-seed in the Western Conference has consistently played with a 4-2-3-1 this season. That changed into a 4-2-2-2 with Nicolas Lodeiro playing in a much higher position than Victor Rodriguez usually plays. It wasn’t so much a tactical change in that the formations were similar. At the same time, it was a variation given the different characteristics of both players.

Seattle fielded a 4-2-3-1 at home against FC Dallas on Saturday. Lodeiro was in the midfield, right behind lone striker Raul Ruidiaz. Seattle came out on top, 4-3, thanks to a Jordan Morris hat trick with a game-winning goal in extra time. Morris, playing in the midfield along the right wing, had a truly exceptional performance. It’s really no surprise. Morris has had a truly great season, maybe the best of his young career. That’s thanks to his ability to move up and down the flank and be very dangerous in the box.

Schmetzer may have come out on top, but his side made too many mistakes. The Sounders squandered a 2-0 lead and gave up too much possession to FC Dallas. That allows for teams to get back into the game. The one-and-done playoff format also doesn’t help since teams can’t afford to be defensive.

“These one-off games are pretty exciting and creates an intense atmosphere,” Morris told reporters after the game. “So I think that’s where that comes from.”

The tactical tweaks weren’t limited to Atlanta and Seattle. Minnesota coach Adrian Heath made changes at the end of the regular season as well. Heath turned a 4-2-3-1 into a 4-1-4-1. Minnesota’s hallmark this season was the defense.

In the first round against the Los Angeles Galaxy, Heath’s team lined up with a 4-2-3-1 formation to cap off the playoff’s weekend action. Despite their strong defense and the home-field advantage, Minnesota could not hold off the Galaxy’s offense down the stretch. Two LA goals in four minutes late in the game ended Minnesota’s season. The Galaxy, who switched from its typical 4-3-3 to a 4-2-3-1 against Minnesota, proved they could defend and win on the road in the postseason. Down a goal with minutes left and the home fans waving the rally towels, Opara moved up, and Heath’s team took on a 3-4-3 look. Minnesota’s first MLS Cup Playoff appearance ended in a 2-1 defeat.

The new format has impacted the playoffs. Coaches know it’s 90 minutes and perhaps overtime rather than holding on for the second-leg. That means making tactical choices in a single-game elimination tournament to decide a champion.