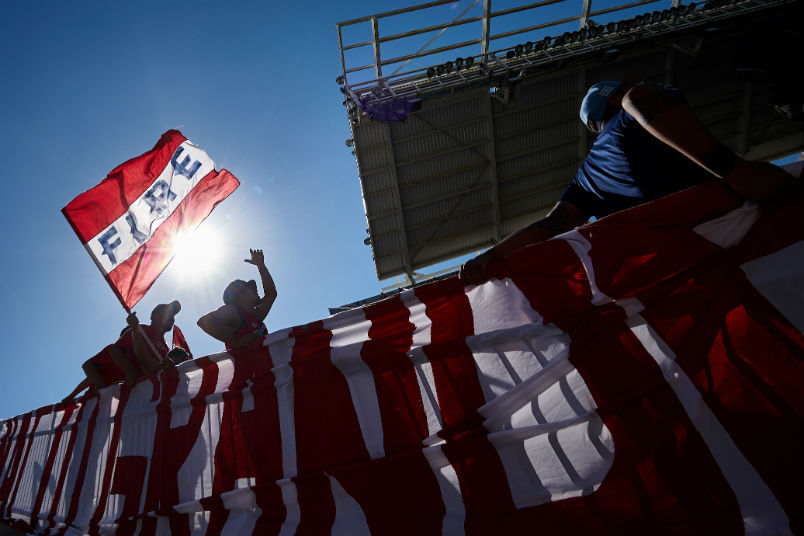 By Jason Davis – WASHINGTON, DC (Oct 9, 2019) US Soccer Players – The Chicago Fire is making moves. The club is leaving a perfectly good soccer-specific stadium for an oversized American football venue that is, for lack of a better way of saying it, in a better part of town. Which is to say that they’re returning to Chicago proper from the village of Bridgeview.

Though the Fire isn’t an original MLS franchise, it might as well be. Launched in the first MLS expansion season back in 1998, the Fire has a long enough history that “tradition” is one of the club’s go-to identity words. Twenty-one years after their first season and 13 years after the move to what was then called Toyota Park, the Fire is coming full circle. The club is returning to its original home on the banks of Lake Michigan. A disastrous season at the box office only reinforces the reasoning behind the move, regressive as it may seem on the surface.

Both the club, with new investor/operator Joe Mansueto out front, and the league, represented as always by commissioner Don Garber, are spinning the move to the NFL venue as a positive. Garber attended the club’s official announcement of the poorly kept secret on Tuesday. He reiterated the league’s position that getting the Fire into the urban heart of the Windy City is a positive for MLS.

“We’ve been focused on soccer-specific stadiums but we have two really big stadiums that are in the urban core that are not soccer-specific: Atlanta and Seattle, and they are working pretty darn good,” Garber said. “We realize that markets have unique needs and communities have different focal points. In this case, we thought it was really important to get downtown and to be in an iconic stadium in a great city was something we worked really hard to achieve.”

To be blunt, there aren’t yet any signs that the Fire is a Midwest version of an Atlanta-in-waiting. Chicago had the league’s lowest attendance in 2019. While Bridgeview isn’t the downtown area of Chicago and the club probably didn’t spend much on marketing with the Soldier Field move in-process, attendance numbers that poor reflect the truth that the Fire brand isn’t resonating in the region.

Leaving a soccer stadium for a football stadium is, if you’ll pardon the on-the-nose metaphor, a hail mary. They’ve been here before, though it was long enough ago to treat the original Soldier Field era as ancient history. What it means for a team that couldn’t make it work in a smaller venue just outside the city limits is the question. If not Bridgeview, why Chicago?

Jumping back to a stadium that didn’t fit them the first time is an interesting answer to an MLS era problem. Stuck with their response to the soccer-specificity insistence of the league back in the mid-2000s, they’re now returning to what they already had. The Fire wants to matter in Chicago, so moving to the city’s biggest stadium is a good way to announce that you’re still around.

In addition to Mansueto, Garber, and Michael Kelly, General Superintendent and CEO of the Chicago Park District, the mayor of Chicago was also on hand. Lori Lightfoot’s presence, ceremonial as it was, dressed the proceedings up with an extra layer of importance. If you didn’t know better, you’d think the Fire was a new expansion team launching in 2020 rather than a longstanding member that once put together a championship season at Soldier Field.

Treating the Fire as an expansion operation makes some sense. Give credit to MLS for not being so intractable that they didn’t know when to pull the plug on Bridgeview. It’s hard to fault the Fire for moving there back in 2005. Getting a stadium under MLS control was the goal across the league. That era didn’t last as long as expected.

Like Colorado and FC Dallas, the Fire struggled with a stadium situation in the current day that was once the envy of the league. With so many teams, both old and new, finding ways to either build in the city or take advantage of massive support in an NFL venue, the Fire situation looked worse and worse for the league.

As much of a black eye as the paltry crowds in Bridgeview were, it’s worth asking if the Fire can draw enough to avoid poor visuals at Soldier Field. Even if the club draws the league average of roughly 20,000, attendance will still appear small in a building that holds just over three times that. Atmosphere matters. It’s hard to see how Soldier Field can have much of one less than half full.

Kelly, however, is eyeballing a more ambitious target. During Tuesday’s event, head of the city’s parks said he believed the Fire could draw 25-30,000, with a handful of sellouts possible. Getting to those lofty numbers will require the organization to make massive strides in a short time frame. Turning the Fire into a smash at Soldier Field mostly falls to Mansueto, the new billionaire entrepreneur owner.

“It’s an important day in club history as we move back to the city,” said Mansueto. “Bridgeview was terrific for us, but I think to take this club to the next level in terms of reaching all of Chicago we need to be located centrally. I think it’s going to change the whole tenor of the club and what it means to the broader Chicago region.”

The Fire’s new day will start without their biggest name, Bastian Schweinsteiger. The biggest name on the Fire roster announced his retirement the same day the club announced the move to Soldier Field.

Despite the most significant move of their offseason taking place mere days after the end of the 2019 regular season, the Fire still has choices to make. The reboot of the club in Chicago itself is an opportunity to refresh several things about the operation. New owners do not always like to rock the boat when they take over. Still, there’s a natural inclination to make the club “theirs” by installing sporting leadership of their choosing. Changes in the club’s hierarchy wouldn’t be a surprise. Neither would parting ways with head coach Veljko Paunovic. Those moves aren’t stadium dependent with the club missing the playoffs two seasons in a row.

Then there’s the matter of the name. It’s tempting of the Fire to change the identity of the club to reset perceptions. There’s a truism in MLS, that the older the club, the tougher it is to overcome a minor league status in the minds of sports fans. In a place like Chicago, a city loaded with pro sports teams, soccer never broke through the noise. A new name might get the club the kind of attention more in line with the current trends in MLS.

Or not. It’s hard to say how this will work out for the Fire. It’s a strange situation for the club. Back in the mid-2000s, nobody predicted a network TV show using the same name or suburban soccer turning into a short-lived trend in MLS. Soccer in America changed quickly, and we now know how easy it is for a team to get left behind.