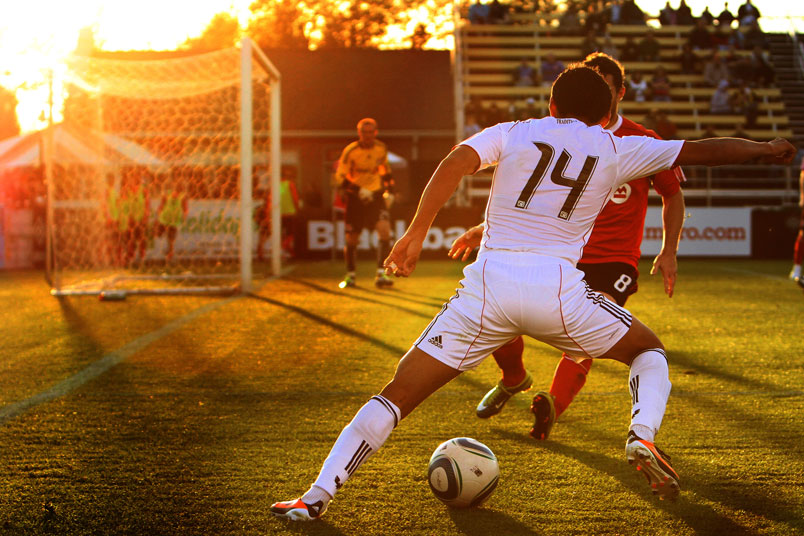 By Charles Boehm – WASHINGTON, DC (Oct 17, 2019) US Soccer Players – A piece of American soccer history will take its final bow on Saturday before heading into oblivion this winter. The USL Championship’s Charleston Battery close out their 2019 regular-season slate vs Bethlehem Steel at MUSC Health Stadium, the last game in the stadium’s 20-year history.

Debuting as Blackbaud Stadium in 1999, the same year as Columbus Crew (now Mapfre) Stadium, the atmospheric venue on suburban Daniel Island is one of the first soccer-specific venues in the sport’s modern era in this country. It’s hosted the USWNT, a range of club teams from abroad, concerts and community events, and many MLS teams for the Battery’s traditional preseason tournament as well as myriad lower-division league matches. It’s been a home fortress for Charleston’s runs to USL championships in 2003, 2010, and 2012.

For years visitors have raved about the game day vibe, English-style Three Lions pub inside the stadium, and its displays of soccer artifacts. Occasionally an alligator in the marsh beyond the north goal even chomps on a stray ball. About a decade ago, the Battery turned the facility green installing solar panels to offset carbon emissions. An adjacent training field provides further options for the home team.

All in all, the place has provided brick-and-mortar proof that it’s possible to survive, even flourish, in lower-division soccer in North America. The Battery is one of this nation’s oldest continuously-operating professional clubs and seemed to have carved out a sustainable model despite showing little interest in ascending to MLS like so many of their USL peers.

It turns out that all that history can’t hold a candle to the market forces of Charleston’s bustling real-estate scene. Earlier this year the club sold off their stadium to an Atlanta-based property developer for $6.475 million. Soon wrecking balls will replace the size 5s as the 11-acre site is redeveloped as “townhomes, condominiums and commercial buildings,” according to the local Post and Courier newspaper.

That will leave the Battery homeless for a least a time, though they are framing this as a move they want to make anyway. Fan demographics and conventional wisdom have shifted significantly since 1999. The club want to get closer to the, stop me if you’ve heard this before, urban dwellers and millennials who have replaced suburban soccer moms and dads as American pro soccer’s target audience of choice.

Club officials have expressed interest in returning to Stoney Field, the city-owned field in downtown Charleston they shared with local high school sports in their early years. It’s more accessible to more people and adjacent to the local minor-league baseball park. The problem, at least in the short term, is that the half-century-old venue was built atop a landfill and is sinking into the alluvial soil of a city essentially built atop a river delta.

That’s necessitated a multi-million-dollar renovation project of Stoney Field that won’t finish until Fall 2020 at best. The Battery has expressed interest in chipping in funds to ensure that it’s rebuilt with soccer in the plans. That will need approval from the city government. It’s far from clear how far along those efforts are. In the meantime, Johnson Hagood Stadium, the football venue at The Citadel military academy nearby, looks like the Battery’s best option for 2020.

It’s hard to understand why Charleston sold their historic ground before locking down a new one. Perhaps the developers gave them an offer they couldn’t refuse. The club has yet to confirm where they will play their home games next year, though, telling local media that an announcement will come after season’s end. Sources tell USSoccerPlayers that the Battery will definitely compete next year, yet it’s not clear exactly what the club’s long-range prospects are. As much may have changed over the past two decades, ownership will likely still need to invest significantly to make a lower-division team work.

As the Battery shift towards a new chapter, their home for the past two decades joins a strange and somewhat sad list of departed or disused lower-division soccer-specific venues. That includes Atlanta Silverbacks Park, Rochester’s Marina Auto Stadium (originally PAETEC Park), home of the Rhinos and Western New York Flash, and the Virginia Beach Sportsplex, where the Mariners once operated one of the most respected lower-division operations.

All were centerpieces of bold ambition and bullish optimism about the sport’s viability, even in smaller or more challenging markets. They appeared to be shining examples of growth outside the top flight. All were reflections of the prevailing sentiment at the turn of the century that ownership and construction would provide a foundation, both literally and figuratively, for a long-suffering game.

Some even coaxed public funds from their local municipalities, promising to anchor transformative effects for the wider community. Some hosted big games and capacity crowds in their heyday. Today they generally have a very different character, with their original tenants either gone, on hiatus, or life support, left to youth events or other niche sports like lacrosse or minor-league football.

Virginia Beach/Hampton Roads was once considered one of the country’s up-and-coming sports scenes. With Major League Baseball nearly moving the Expos to the Tidewater region instead of Washington, DC. Rochester was MLS’s planned next market for long stretches of its first decade. At one point Kansas City Wizards players were even told their franchise would soon be moving to upstate New York. The Silverbacks fought and scrapped for survival in a region that no one ever expected would someday become home to MLS’s best-supported team and reigning champs.

Over the past few years new lower-division stadiums have risen, or been renovated, in lower-division locales like Austin, Birmingham, Hartford, Irvine, California, Herriman, Utah, and the Rio Grande Valley. Come spring, Louisville City will debut their gorgeous-looking new $70 million home, perhaps the crown jewel of them all so far. We keep hearing that there’s never been a bigger boom or a better time for investment in American soccer.

Yet when you cast a glance at those thrilling projects of yesteryear that fell on hard times, it’s hard not to wonder whether every single one might well become a relic sooner than anyone could imagine.