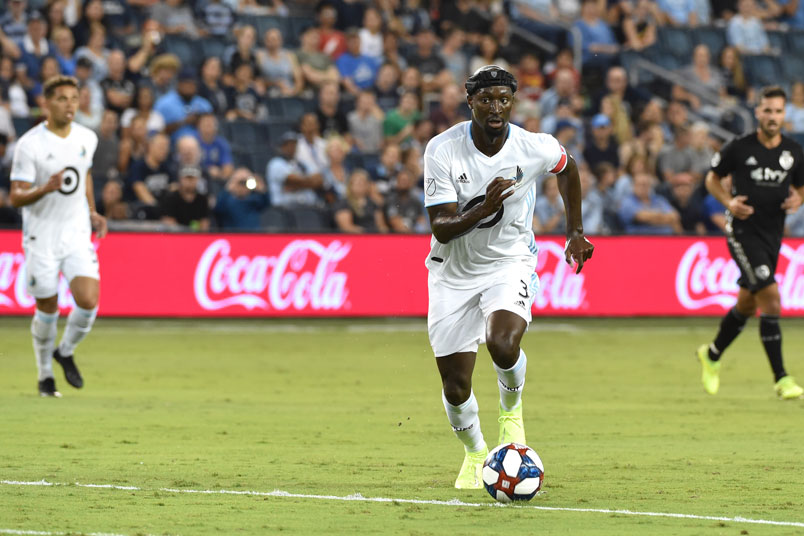 By Jason Davis – WASHINGTON, DC (Oct 18, 2019) US Soccer Players – Ike Opara winning Defender of the Year in Major League Soccer in 2019 is definitely about Ike Opara. The 30-year-old Minnesota United center back won his second Defender of the Year in three years on Thursday, beating out Walker Zimmerman of LAFC and Miles Robinson of Atlanta United. Opara carried the player and front office votes by significant margins but crushed his competition among the media.

More than 44% of the writers and reporters who cover the league chose Opara for the award, with Robinson coming in a distant second in that category with 15.75% of the vote. Opara commands respect from most quarters, thanks to his athleticism, heady play, and leadership qualities.

Winning two Defender of the Year Awards puts Opara in elite company. Only Robin Fraser, Carlos Bocanegra, and Chad Marshall have won the award multiple times, with Marshall holding a record with three wins. Opara joins Fraser and Marshall as players who won Defender of the Year with two different teams, though neither of those achieved the feat in as few seasons.

Reaching these heights was not easy for Opara. Drafted out of Wake Forest University in 2010, he was expected to be a defensive star immediately upon arrival in MLS with the San Jose Earthquakes. In addition to his college resume, Opara boasted an excellent history representing the United States at the youth international levels. He was the third overall pick behind Danny Mwanga and Tony Tchani.

Injuries waylaid his rise to fame with the Quakes. Over three seasons, Opara made just 35 appearances for San Jose due to two different foot problems and a concussion incident in 2012. Whatever promise he showed was offset by his inability to stay on the field. The defender looked like a “what if?” player in the making.

The Quakes chose not to offer Opara a new contract after the 2012 season and traded his rights to Sporting Kansas City. Though he would eventually blossom into one of the league’s best defenders in Kansas City, Opara started slowly under Peter Vermes. More injuries curtailed his efforts to meet his potential, including an Achilles tendon tear in 2015 that nearly pushed him to retire. It’s tough to blame the Quakes then or now for their decision, especially in light of Opara’s continuing injury issues.

In 2017, Opara did what no one thought he could do. He stayed healthy. For the first time in his career, Opara appeared in more than 20 games, starting 30 times for Sporting. That consistency allowed the defender to show his latent quality, securing him both an MLS Best XI inclusion and his first Defender of the Year Award. Opara looked like he was in for a long stay in Kansas City, the place that finally allowed him to play to his potential.

Vermes, and Vermes alone, makes the decisions in Kansas City. When Opara indicated his desire for a raise after the 2018 season, the Sporting head coach responded by trading him to Minnesota United for a then-record $1 million in Targeted Allocation Money. Decrying the methods Opara and his agent used to bring attention to his desire for a new contract, Vermes sent one of the league’s best defenders packing.

At the time of the trade, it certainly didn’t look like Opara was upgrading his circumstances. The $1 million in TAM the Loons sent to Kansas City seemed astronomical, the kind of premium paid by desperate club flailing about for answers. Though Minnesota was set to start play at Allianz Field in 2019 and showed signs of improvement coming into the year, there was no guarantee they could contend for the playoffs.

Sporting, on the other hand, were expected to be right back near the top of the Western Conference following last year’s 1st-place finish. Sporting represented perennial excellence. Minnesota represented mediocrity.

If the Loons were going to deliver on the promise of their three-year, slow growth plan, Opara would have to make a massive difference at the back. It was defending that proved to be Minnesota’s biggest weakness in the first two seasons of the club’s existence. Despite Opara’s resume, there was no book on him outside of the Sporting Kansas City system. Good player or not, he might not fare as well in a team without the established identity passed down from Vermes at Children’s Mercy Park.

With a season’s worth of evidence behind us, we can now be sure that Opara was much more than a center back. If Minnesota conceded an astounding 28 fewer goals in 2019 than in 2018 wasn’t proof of that, the regression of Sporting Kansas City adds additional weight. SKC gave up 27 more goals this year than last.

Both clubs made other changes that impacted those numbers, but Opara is clearly responsible for much of difference. Defenders don’t merit Most Valuable Player consideration as a rule, so Opara will have to be content for the top honor among players in his area of the field.

His new club is certainly happy to have him on their side. The culmination of Minnesota United’s plan leans heavily on an acquisition that no longer looks so ridiculous. Opara’s play flipped the conventional wisdom that the Loons had overpaid for the defender. Now, it looks like United got a steal. That’s how important Opara has become. Opara got his new contract.

On Sunday, Opara will face off against Zlatan Ibrahimovic in the first round of the MLS Cup playoffs. There might not be a more difficult challenge for any defender in MLS than a battle with the indomitable Zlatan. Opara will have his work cut out for him. He’ll get to face the task of defending Ibrahimovic at home, in front of a fan base that has fully embraced him. They know just how much of this first successful season in Minnesota United’s MLS history is down to the work of a player who only arrived in January.