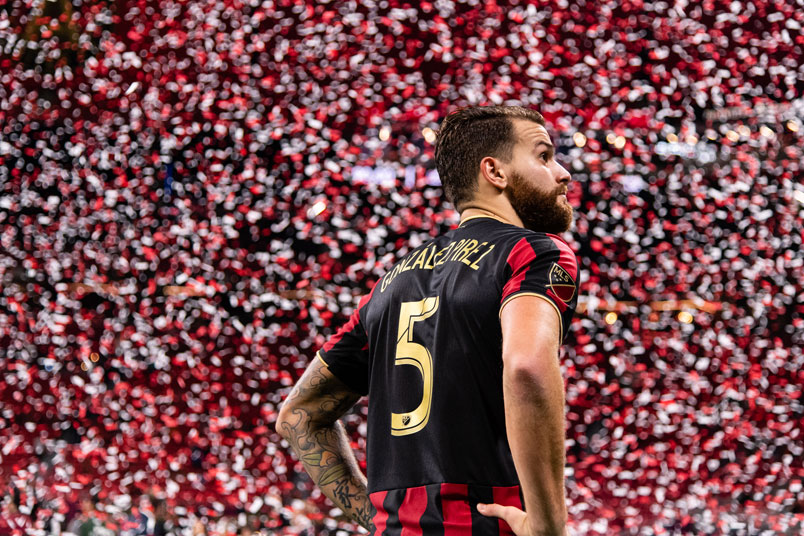 The soccer news starts with another conference final upset. 4th-place Toronto FC knocked out 2nd-place Atlanta United 2-1 at Mercedes-Benz Stadium. Toronto advances to play at Seattle in the 2019 MLS Cup final on November 10 (3pm ET – ABC). Toronto and Seattle met in the 2016 and 2017 MLS Cups, both held at BM Field. Seattle won in 2016 on penalties after finishing scoreless and Toronto completed their treble in 2017 beating the Sounders 2-0.

Atlanta took the lead at home with Julian Gressel scoring in the 4th minute. Josef Martinez failed to convert an 11th minute United penalty with Nicolas Benezet equalizing in the 14th. Nick DeLeon scored for Toronto in the 78th minute. Jozy Altidore wasn’t available for Toronto as he continues his recovery from injury.

“I have to say that today was resiliency,” Toronto coach Greg Vanney told FS1. “It wasn’t beautiful soccer. It was hard, and it was our resiliency. These guys just refused to give up. They kept looking for that moment and they got it.”

In the fourth round of the League Cup, Christian Pulisic subbed out in the 70th minute for Chelsea in their 2-1 home loss to Manchester United. Chelsea fell behind to a 25th minute penalty with Michy Batshuayi equalizing in the 61st. United scored again in the 73rd minute.

“I saw a lot of things that were good for us for the future, a lot of positives,” Chelsea manager Frank Lampard said. “I hate losing, we all do here, but it’s clear there is a big picture and there are a lot of big games for us to come and a busy fixture list. Now we move on and focus on what is to come.”

Josh Sargent’s Werder Bremen beat Heidenheim 4-1 at home in the second round of the DFB Pokal. Milot Rashica put Werder up in the 6th with Leonardo Bittencourt doubling the lead in the 11th. Davy Klaassen made it 3-0 in the 18th with Marco Friedl scoring in the 41st. Heidenheim converted a penalty a minute into first-half stoppage time. Alfredo Morales’s Fortuna Dusseldorf beat Erzgebirge 2-1 at home. Failing behind in the 12th minute, Rouwens Hennings equalized from the penalty spot in the 45th. Kasim Adams scored Fortuna’s winner in the 75th. Zack Steffen wasn’t in the squad for Dusseldorf.

Timmy Chandler subbed out at halftime for Eintracht in their 2-1 win at St Pauli. Bas Dost scored for Eintracht in the 4th and 16th minutes. St Pauli pulled a goal back in the 42nd. Fabian Johnson wasn’t in the squad for Gladbach’s 2-1 loss at Borussia Dortmund. Marcus Thuram put Gladbach up in the 71st. Dortmund equalized in the 77th and scored again in the 80th minute.

Andrija Novakovich’s Frosinone shutout Trapani 3-0 at home in Serie B. Camillo Ciano scored in the 1st, 54th, and 64th minutes. Matt Polster wasn’t in the squad for Rangers in their 4-0 win at Ross County in the Scottish Premier League. Alfredo Morelos opened the scoring in the 20th minute. Ryan Jack added goals in the 29th and 37th minutes with Morelos scoring again in the 71st. Ethan Horvath was on the bench for Club Brugge’s 2-0 win at Zulte-Waregem. David Okereke scored in the 23rd with Mbaye Diagne adding a goal three minutes into stoppage time.