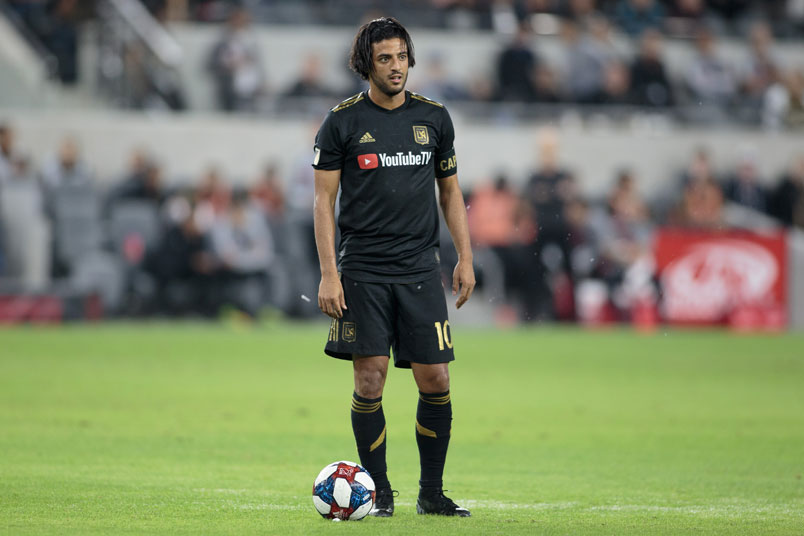 By Luis Bueno – RIVERSIDE, CA (Oct 30, 2019) US Soccer Players – The greatest team in league history entered the Western Conference final against Seattle. They finished the night as the greatest footnote in league history. LAFC had a magical, dominant, and amazing season now tarnished by the final act. LAFC was no match for the Seattle Sounders, at Banc of California Stadium no less, and watched the visitors advance to the 2019 MLS Cup.

LAFC’s dream season ended with a cold splash of water to the face. Records fell this season, both team and individual, but ultimately it meant a playoff exit. This team set itself apart because of its accomplishments. Nobody will forget that. Still, without an MLS Cup, it’s hard to keep the 2019 version of LAFC in the conversation for the all-time best team in the league.

Carlos Vela may be the league’s Most Valuable Player when the league announces the award. Bob Bradley might win Coach of the Year. The team already shattered or equaled records many thought untouchable. However, all involved would likely trade all of that for an MLS Cup.

Right or wrong, championships are what measure teams. Trophies are the ultimate litmus test. Regular-season accolades only go so far. The regular season sets teams apart within that season. The postseason is what sets teams apart over all seasons.

This season though, seemed to be the exception. LAFC’s season was so strong that this team became one of the all-time greats no matter what happened in the postseason. LAFC scored 85 goals this season, equaling the 1998 LA Galaxy’s high-water mark. Only those two teams have surpassed the 80 goal mark in league history. Vela led the goal charge, scoring a record 34 goals. The team had the best goal-differential in league history at +48 and allowed the fewest goals in the league this year with 37.

Now, this is the first year of the change in the playoff format. MLS had never before had knockout matches throughout the entire postseason. Previously, the Western Conference Final would have played out over two legs, with the first leg in Seattle and the second leg scheduled for Los Angeles. Some may argue that LAFC would have taken a two-leg series.

Maybe, but the previous system was not great either. The team that finished lower in the table hosted the first-leg, and that caused all sorts of problems. Because of that and the road-goal tiebreaker rule, home teams in the first leg muddied up play and did what they could to get a result, then tried for a road goal to get through. That system did not necessarily reward the best team either. LAFC hosted the match. A one-off game at home is what any club would want.

Ultimately though, the team’s accolades meant only so much and in many ways were a bit misleading. The team’s defense, for instance, allowed the fewest goals in the league. Yet in big moments, that same defense made mistakes.

Zlatan Ibrahimovic punished that defense in the semifinal match against the LA Galaxy. Steven Beitashour inexplicably played the ball back toward teammate Tristan Blackmon, who couldn’t handle the pass. Ibrahimovic eventually knocked it in under goalkeeper Tyler Miller’s hands and went into the back of the net. The goal leveled terms at two apiece. LAFC’s offense stepped up and made amends for the mistake.

Against Seattle, it was once again the defense. Trailing 2-1, LAFC defender Jordan Harvey made a poor clearance attempt from inside the LAFC penalty area. The ball went to Nicolos Lodeiro, slipping it to Raul Ruidiaz who buried it past Miller for the third and final goal. The goal took the life out of the crowd. Even though there was nearly half an hour left on the clock when that happened, it essentially sealed the game for the visitors.

Defense is still what separates great teams from good teams, and all-time teams from great teams. The ’98 Galaxy team that also scored 85 goals faltered in the postseason, much like LAFC did this year. That Galaxy team could not figure out the expansion Chicago Fire’s defense. The Galaxy and Chicago tied 1-1 in the first leg in Chicago. When everything was on the line at the Rose Bowl, the Galaxy could not score and bowed out by a 1-0 final. Ironically it was Bob Bradley at the helm of the Chicago Fire pulling off the upset.

Offense is great and necessary. A strong and steady defense is always reliable. Tough-as-nails defensive teams win MLS Cups. Teams that throttle opponents in the regular season and set scoring records typically do not.

That ended up being LAFC’s problem. The offense did great when it went ahead and controlled matches, which is why the defensive statistics were so impressive. When the team fell behind and the opposing defenses got tighter, LAFC did not have answers. At least not when it mattered the most.

Vela, Diego Rossi, and Adame Diomande did some special things in 2019. The team exceeded expectations that many had for LAFC this year, certainly more than is expected from a second-year MLS club. That does not take the sting off this loss, and that will not help the team’s standing among the all-time greats.

LAFC has the Supporters’ Shield. They also have an empty spot in the trophy cabinet reserved for an evasive trophy that ultimately proved a step too far for this team.