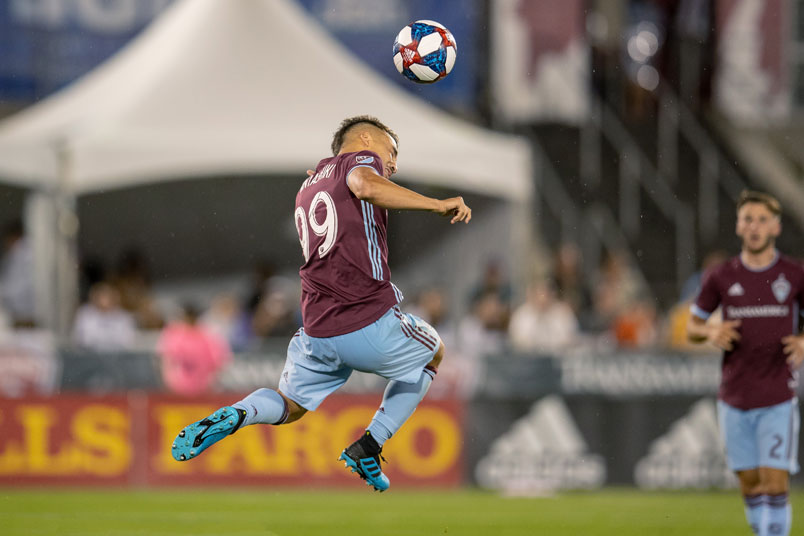 By Jason Davis – WASHINGTON, DC (Oct 16, 2019) US Soccer Players – It’s awards season in Major League Soccer. With the regular season wrapped up and the playoffs looming, the league has begun handing out individual recognition for the best of 2019.

First up, the Rookie of the Year Award. Colorado’s Andre Shinyashiki took home the trophy for the best first-year professional player in the league thanks to his total of seven goals and three assists for the Rapids. Shinyashiiki entered the season as one of the leading candidates to win the Rookie of the Year and backed up that hype.

Shinyashiki should get some metaphorical bonus points for winning despite the situation in Colorado. It’s hard enough to make the jump to MLS even with a team that functions properly. Colorado changed coaches twice during Shinyashiki’s first campaign, raising the degree of difficulty dramatically.

Gaining the trust of one coach, much less a second and a third, is a trick not too many rookies could pull off. It’s even more impressive that Shinyashiki’s contributions got stronger as the season wore on. He started nine games from August 3 through to the end of the season, scoring three times in that period.

Rookie of the Year is subjective, and Shinyahiki’s position helped. Players who score goals get the advantage when it comes to general awards. That doesn’t take anything away from Shinyashiki’s win. It’s just the reminder that scoring tends to matter more.

For example, Philadelphia’s Brenden Aaronson finished in 2nd-place. Aaronson plays in a less glamorous role for the Union, but played more minutes (1,722 to 1,670) with more starts (25 to 18) than Shinyashiki. Aaronson’s age arguably makes his success in 2019 more impressive. The Philly midfielder is three years younger than Shinyahiki. He’s also part of a team that made the playoffs.

Shinyashiki also beat out Hassani Dotson of Minnesota United. Doston played significant parts in the improvement in Minnesota over 2018, deployed in multiple positions when Adrian Heath needed competent depth players during the more stressful periods of the season.

No one would have complained too much outside of Colorado or the home city of the other unrewarded finalist is someone other than Shinyashiki took home the Rookie of the Year honor. There is no absolute truth here.

Shinyashiki’s victory among three first-year professionals again highlights the poor fit of the Rookie of the Year in the current version of MLS. Taking nothing away from a college player in his first MLS season, Rookie of the Year seems like an odd plaudit to hand out in a league ever-more focused on developing professional players and signing talented young players from abroad.

The rules stipulate that the Rookie of the Year is the best player among those with no previous professional experience who made his debut in the current season. Fifteen years ago, almost all of the new talent entering MLS came from college, much of it American. The list of winners going back to the beginning of the league is a who’s who of the best American product ever to come out of MLS.

Carlos Bocanegra. Clint Dempsey. Michael Parkhurst. Each won the Rookie of the Year Award on the backs of stellar first seasons following prominent college careers. In almost every case during that period, top rookies became regular starters from the first day of the season. It was a little more like the NFL and NBA, with the draft crucial to team building and draft picks expected to step right into important roles.

In 2019, rookies are much more likely to be bit players. Shinyashiki, Aaronson, and Dotson are exceptions. They stand out among a shallow pool of first-year pros given a chance to contribute. Clubs are more careful than ever before with handing too much responsibility to an untested rookie.

As a point of comparison, Bocanegra started 27 games of the Fire’s 2000 season and logged more than 2400 minutes. Dempsey started 23 games in 2004 and collected more than 2000 minutes. Parkhurst started every Revolution game a year later and never left a game before full time.

MLS teams have shifted focus away from the draft and towards academy products and young international signings. Many players with college experience sign as homegrown players after attending school for a few years before returning to the fold and going pro with the club that developed them.

Occasionally, as in the case of Aaronson, a player can be an academy product, a rookie, and still a teenager. Though Aaronson played with Bethlehem Steel before joining the Union as a senior roster player in 2019, he did so as an amateur. That allowed him to retain his Rookie of the Year eligibility.

If it feels like something of a loophole, that’s because it probably is. It’s not Aaronson’s fault that the award’s rules make it hard to qualify if a player has even a minimal amount of professional experience.

The group of first-year MLS players who fit the spirit of the Rookie of the Year label but are ineligible because they played as professionals before joining the league is long. A push to develop young players created the multi-step process that is now almost the norm across the country. MLS, if only unintentionally, is working to eliminate as many possible Rookie of the Year candidates as it can.

A player who signs a pro contract out of the academy or college tabbed as a future contributor not ready for the top level is likely to get his first professional minutes in the USL. If a team is intent on keeping a player eligible, they could do what Philadelphia did with Aaronson. Give him time with the reserve team before his homegrown contract goes into effect.

Why is any of that necessary? The league’s desire to hold onto an award handed out by other American sports but ill-suited to soccer generally. With it, MLS specifically does a disservice to the amount of young talent now arriving in the league. It’s becoming harder and harder to find enough Rookie of the Year candidates to fill out the field. MLS pushes the narrative that is a stepping stone for players aiming for moves from South America to Europe. The better approach would be to hand out a Young Player of the Year Award.

That award would have requirements of its own. An age limit. Minute thresholds. The kind of thing that would ensure that the new award lives up to the original spirit of the Rookie of the Year. Congratulations to Andre Shinyashiki, a worthy winner of an award that’s time has come and gone.