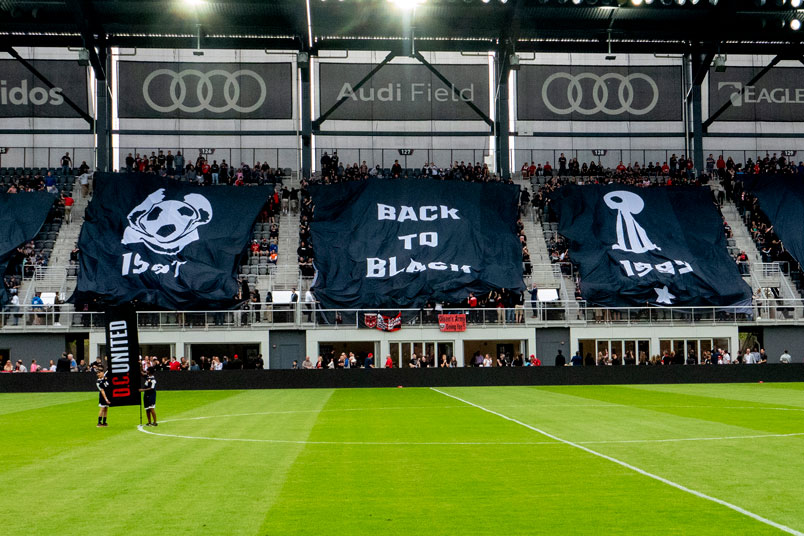 By Jason Davis – WASHINGTON, DC (Oct 11, 2019) US Soccer Players – The MLS Cup playoffs are mostly about crowning a league champion. Fourteen teams, eleven games, one group of players showering in confetti with Queen blasting from the speakers. The culmination of a long campaign decided by a knockout tournament played over barely three weeks.

If only one team can win the title, that means 13 teams will end their season in disappointment. Because only one team can be unequivocally called a success, assessing success or failure for everyone else is a more subjective exercise.

Some teams need a good run this postseason more than others. Short of winning a championship, there are levels of achievement that can validate a program’s direction and send a message to fans that the future is bright. With more than half of the league in the playoffs, merely making it in the field is no longer good enough on its own.

Just advancing to the postseason doesn’t necessarily give ownership groups cover if they are unwilling to increase investment or eat the contract necessary to bring change. The increasing pace of MLS ambition is putting to bed the notion that a first-round exit is good enough. With that in mind, here’s a look at a select group of clubs preparing for the playoffs who need more than an immediate exit.

2019 is already the Union’s best season to date, but the bar was low enough for that not to be much of a statement. The club’s highest finish since 2011 should be a reason to celebrate the progress made in Chester. However, a late-season swoon that took the team from contending for the top spot in the Eastern Conference to 3rd-place by the end of Decision Day took some of the rose off the bloom.

Jim Curtin proved he can coach in 2019. Winning a playoff game for the first time in club history would go a long way towards solidifying support for the soft-spoken head coach.

GM Ernst Tanner also proved his ability to find first team-quality players since arriving from Germany last year. The club continues to build on its burgeoning reputation as a developmental hotbed. Getting to the conference semis, or better yet, the conference final could lock in the belief that the Union is doing it right on the banks of the Delaware River. The Union may not have to spend big money to keep up with the MLS Joneses. Instead, it can sell its fans on the idea that winning and watching the budget are not mutually exclusive.

Things might have been different for DC United heading into the postseason if Wayne Rooney hadn’t announced his decision to leave for Derby Country following the end of the campaign. A set of unfortunate circumstances wrecked DC’s momentum immediately following that announcement. Now, the club is backing into the postseason with the departure of its biggest star looming.

If United is going to keep the attention of fans in Washington and maintain some momentum going in the post-Rooney era, it must maximize the time the Englishman has remaining in MLS. Beating Toronto on the road would be a start. A shock win over NYCFC in the conference semifinal would truly speak to the new attitude of ambition for DC.

United’s newly formed ownership group must make more moves in the offseason to keep the club competitive in the Eastern Conference. Having the belief of the fans makes that job easier. That will keep pressure off decision-makers like Dave Kaspar and the man in charge on the sidelines, Ben Olsen. It’s less necessary to replace Rooney with a player of similar fame and cost if everyone buys into the total United approach.

DC is still finding its feet as a modern club. It doesn’t need a championship to call 2019 success, just a playoff win or two that foster positivity for 2020.

It can feel like any success for Real Salt Lake is an upset. The small-market MLS team is fighting the odds every season going up against richer, higher-profile clubs. That might make just qualifying for the playoffs, or winning a playoff game every once in a while, enough to satisfy everyone with an interest in the club. Not every team can be a juggernaut.

2019 is an atypical enough campaign for RSL that there’s some pressure to make this year’s playoff berth count for more than the small victory of just getting there. Mike Petke’s odd exit set in motion more public information than most fans needed to know about the club. Disappointing attendance numbers at Rio Tinto Stadium point to a fan base unexcited about what’s happening with their MLS team.

Interim head coach Freddy Juarez did yeoman’s work with RSL finishing the regular season in 3rd-place. That means a home playoff game and the pressure to make it count. Regardless, RSL needs work this offseason to get back to what they had up until that Leagues Cup game back in August. A few playoff wins for the perpetual underdogs would certainly help.

The once-mighty Galaxy hasn’t kept up with the changing tides of Major League Soccer in recent years. The club’s leadership fell flat in its attempts to keep the team at the top, whiffing on several signings following the departure of Bruce Arena in 2017. If LA is going to prove that it doesn’t need the Don of American soccer coaches to contend for championships, putting together a deep playoff run this year is mandatory.

Some of the Galaxy’s issues stem from that other LA club. Though LAFC hasn’t won a championship yet, its 2019 regular-season success and audacious, attacking brand of soccer put their LA rivals to shame. The Galaxy still hasn’t lost a game to LAFC. In almost all other ways, it looks like the Black & Gold interlopers have passed them by.

Getting to the playoffs was job one for LA under Guillermo Barros Schelotto, a job that’s now done. The Galaxy didn’t do much to instill confidence with a Decision Day loss to an already-eliminated Dynamo team, but an MLS Cup title is at least a possibility. Winning on the road in Minnesota won’t be easy. A victory there is just the type of thing that could show the Galaxy remains relevant both in MLS and in its home market.

Zlatan won’t be around forever, and the bar for the Galaxy remains the MLS Cup title. The price you pay for being a dynasty once-upon-a-time is that championship standard. There’s the risk that a deep playoff run will paper over some of the more obvious cracks in the Galaxy roster. LA will take that if it means living up to its reputation as an MLS super club right now.