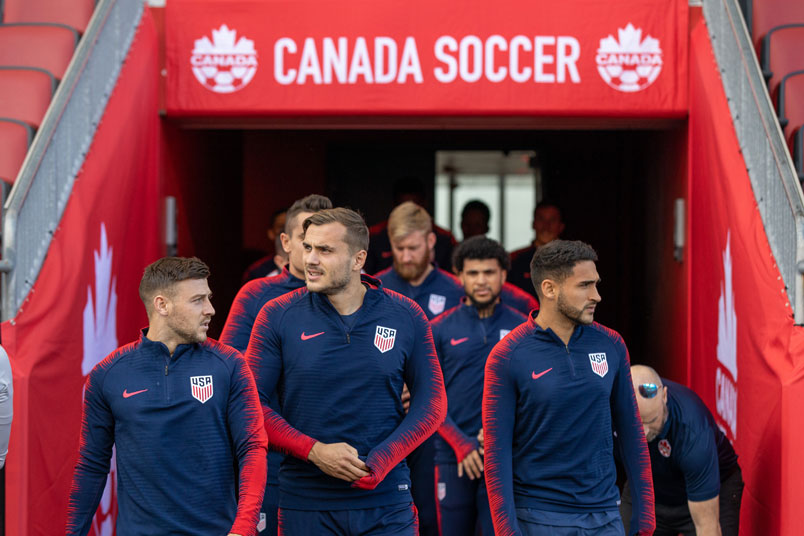 The soccer news starts with the USMNT closing out the October international window at Canada in the Nations League (7:30pm ET - ESPN2). Due to starting their Nations League schedule in the September window, Canada has 6 points and a +7 goal difference from two games played. The USMNT is in 2nd-place with 3 points and a +7 differential from Friday's win over Cuba.

While Canada is looking at this game as a potential rallying point both for the Nations League and World Cup qualifying, the USMNT is once again trying to provide proof for coach Gregg Berhalter's concept. Berhalter is clear about trying to install a new system of play and Canada is an opportunity.

Playing out of the back

The USMNT tried playing out of the back against Mexico in September and lost 3-0 at MetLife Stadium. The USA had a better go of it in the second game in September, drawing 1-1 with Uruguay at Busch Stadium while Mexico lost 4-0 to Argentina in El Paso. What that showed is that Berhalter will adjust his tactics. Playing out of the back against a team like Mexico was a calculated choice that didn't work out on the night. Berhalter is showing that he can take a lesson learned and adapt. Depending on how much of a threat his staff sees in Canada's attack will determine the USMNT's setup. Against Cuba, free flowing wing play and forwards willing to pass made the difference early and often. The USMNT could stay on the run against Canada and expect to get opportunities. How much they give up on the counter is the question.

Cuba had a couple of chances that didn't end up on goal, finishing with no shots on target. Berhalter has already announced Zack Steffen will get the start in a tougher scenario for the USMNT goalkeeper and the defenders in front of them. Canada is hardly an offensive juggernaut, but they had their own hat-trick hero in their 6-0 home win over Cuba last month. Junior Hoilett did half the scoring. Alphonso Davies had the game's only goal against Cuba in the Cayman Islands. Those two are the obvious outlets for Canada along with Jonathan David, potentially putting pressure on the USMNT defense with pace and energy. They're going to need the distribution to create opportunties. That's not a given with a USMNT lineup that has their own young attacking players looking to put on a show.

League A, group A in November

Regardless of what happens in Toronto, league A, group A is a home and away scenario with the USMNT hosting Canada in Orlando next month. This isn't a 180-minute series but it might as well be. The two teams meet again on November 15 with the USMNT closing out the Nations League group stage against Cuba on the 19th. That's a schedule advantage for the USMNT that may prove irrelevant if Canada can't hold up at home on Tuesday night.