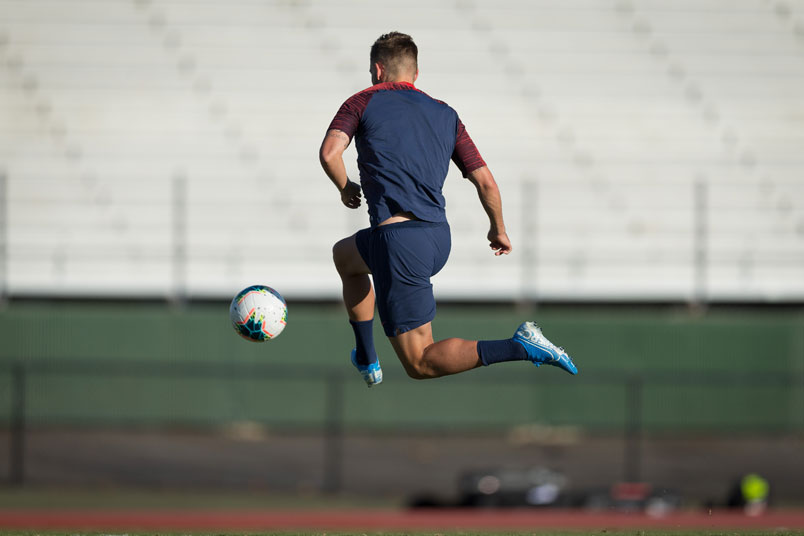 The USMNT opens its Nations League schedule on Friday night (7pm ET - FS1), playing Cuba at Audi Field in DC. There are plenty of opinions about Concacaf's newest tournament, most of them asking if it really benefits the elite teams in the region. For Concacaf, part of the point is obligating all of its members to play games that count in what were friendly windows. In the latest era of the FIFA Rankings, that can only help the confederation as a whole.

One thing that hasn't changed in the revisions to FIFA's rankings formula over the years is that some games count more than others. FIFA weights games based on competitiveness. With that in mind, it's no surprise that friendlies carry less weight than any games that count. That's FIFA's importance coefficient.

Had Concacaf not followed UEFA's lead in forming a Nations League, their teams would be playing friendlies during international windows that count as 10 in FIFA's formula. Nations League games count as 15 with the playoffs and finals at 25 the same as World Cup qualifiers. That makes it important for Concacaf teams should FIFA decide to use its rankings to seed the World Cup for 2022 and when it expands in 2026.

Mismatches are built into the first edition of the Nations League because Concacaf had little choice. Once again following UEFA's lead and building out four leagues with multiple groups within them, they needed a dozen teams in the top tier League A. There are only four Concacaf teams currently ranked in the top 50. One of them, 47th-place Jamaica, wasn't part of the last Hexagonal and thus didn't get an automatic spot. They didn't make it through Nations League qualifying and ended up in League B. Cuba finished in 6th-place in qualifying, two spots ahead of Jamaica and took the final spot in League A.

Concacaf's qualifying had an obvious flaw, with goal difference deciding 4th through 11th-place with all teams tied on nine points. Cuba racked up the goals with an 11-0 win over Turks and Caicos in matchday 1. Only Haiti had a bigger margin of victory to open qualifying, beating Sint Maarten 13-0. Haiti beat Cuba 2-1 at home in the final matchday to take the top spot in qualifying.

What qualifying stressed is the importance of goal differential. With another four game scenario in league play, that could carryover into the groups. Concacaf might prefer something closer to UEFA, but the reality is probably going to be mismatches and underdogs trying to hold scores down.

That starts for the USMNT against Cuba, entering the game already knowing that Canada leads the group with six points and a +7 goal difference . Canada beat Cuba 6-0 at home and 1-0 away in the September window. If the USMNT's game at Canada on Tuesday turns out to be the toughest of this round, the US wants to come out of it ahead of Canada in the standings. That means on goal difference.

How the USMNT will get there is through another revised attack. With Jozy Altidore out with an injury, USMNT coach Gregg Berhalter already announced that Josh Sargent will start at forward. What Berhalter's setup looks like is still an open question, but the expectation is Sargent will have help up top with Weston McKennie and Christian Pulisic providing the kind of wing play that will break down a bunker. Cuba will have no choice but to focus on defense while looking to limit exposure when they have an opportunity to launch a counterattack. Cuba took one shot at Canada and another 90 minutes of little offense is the expectation in DC on Friday.

MLSsoccer's Charles Boehm profiles USMNT forward Gyasi Zardes. The Washington Post's Steven Goff isn't impressed with the level of competition in the Nations League. The LA Times' Kevin Baxter also asks about the importance of the tournament for the bigger countries. Soccer America's Paul Kennedy focuses on how Berhalter can use these games to push his tactical plans forward. MLSsoccer's Paul Doyle with his points for the USMNT in the October window. SI.com's Avi Creditor previews the USMNT vs Cuba in the Nations League.

Brian McBride and Earnie Stewart both had plenty to say about the status of the USMNT program with McBride introduced as the new general manager.

Spending $5 million on midfielder Edison Flores has DC United operating in the transfer market at a new level for the original MLS club.

Tyler Adams’s RB Leipzig is top of the Bundesliga table as the season resumes on Friday with Fabian Johnson’s Glabach 2nd and Weston McKennie’s Schalke 5th.