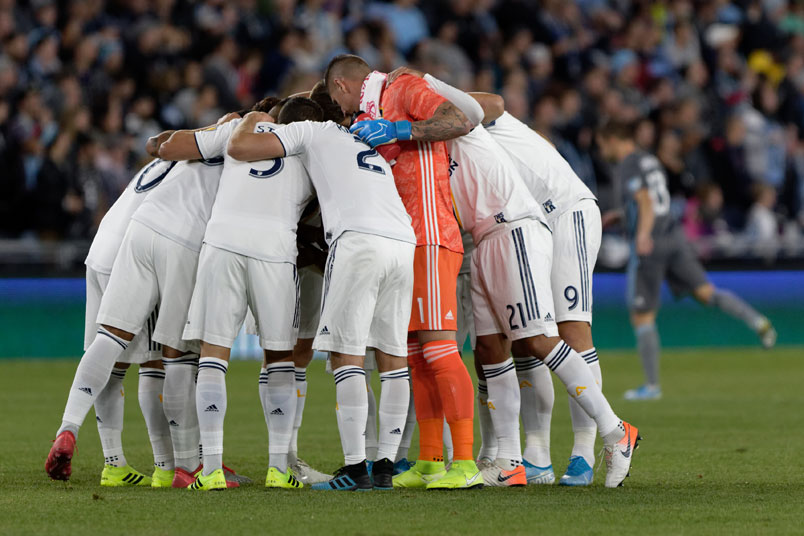 By Luis Bueno – RIVERSIDE, CA (Oct 23, 2019) US Soccer Players – Over the last two seasons, LA’s Major League Soccer clubs have been all over the place. Los Angeles FC arose from nothing, pieced together a strong lineup and coaching staff, and has blossomed into one of the most successful teams in the league over the last two seasons. The LA Galaxy, meanwhile, reminded Angelenos that it has been around since ’96. Until late this season, it didn’t look like it. The Galaxy fumbled away a playoff spot last year. Its tradition of championships seemed more like a relic of days gone by than an attainable goal.

Now, though, those two years of soccer will culminate in a battle that could derail one of those franchises and clear the path for the other to gain control of the city in the short term and possibly for quite a long time.

LAFC will host the LA Galaxy in a winner-take-all playoff match. The winner will move to within one step of MLS Cup while the loser will fall into LA soccer purgatory. This may not seem like a match that could doom one franchise while helping the other lay claim to the city, but that’s exactly what it is. A match of this caliber already happened before, and those same consequences followed both the winner and loser.

This time around, though, the match will be even more intense. Even though the game is on a weeknight with a later-than-usual kickoff time, it will surely draw a large audience on television as well as its usual sellout. The game at Banc of California Stadium is such a hot event that the cheapest ticket for the match on StubHub was $170 apiece. By contrast, the Los Angeles Rams have four home games left, and each game has tickets available for under $100.

With the city watching, failure on this grand of a stage will resonate. Getting out of this shadow of a loss won’t be quick or easy.

Consider the previous history of LA vs. LA playoff soccer. The Galaxy had been in turmoil from 2006-08, even though the team landed David Beckham during that time. It wasn’t until 2009 when the Galaxy finally started to look competent. That year, Chivas USA was on its fourth consecutive season of success. After a horrible expansion season, Chivas USA became one of the more difficult teams to play.

In 2009, the Galaxy reached the playoffs for the first time since winning MLS Cup 2005. Chivas USA was back in the postseason for the fourth consecutive time. The rivalry had been going mostly the Galaxy’s way during that span. So did the playoff version. The first-leg finished in a 2-2 draw. The Galaxy took the decisive second leg, winning by 1-0 on a controversial penalty kick. Such is life. The experienced team gets the calls while the newcomer does not.

The Galaxy went on to reach MLS Cup, the first of four trips that they would take over the next six years. Chivas USA never made the playoffs again, folding five years later.

It’s a safe assumption that both clubs will still be in business five years from now. Still, the losing team’s image will surely suffer. LAFC is very much the new kid in town. Trying to establish itself in the LA sports landscape has been tough and will only get tougher now that both the LA Lakers and LA Clippers are fighting for attention.

The roles pare partially reversed heading into Thursday’s contest. The Galaxy comes in with a chip on its shoulder as the underdog. The Galaxy, the team with the most wins in league history, had to watch LAFC dominate the rest of the league. Of course, the Galaxy did not fall victim to LAFC, although the Galaxy blew a 3-1 lead at LAFC and settled for a 3-3 draw in their Augut 25 contest.

It’s the Galaxy carrying extra motivation into this match. LAFC reached milestones that the Galaxy would be happy to have set this year. LAFC won the Supporters’ Shield, had a +48 goal-differential, and scored 85 goals, equaling the Galaxy’s record set in 1998.

Still, the Galaxy won 2-1 at Minnesota United FC on Sunday. That chip on its shoulder only grew because of it. The Galaxy expects to be the team the rest of the league is fawning over. Now, they’re not even the favorites in LA.

The winner of this latest installment of the LAFC vs LA Galaxy rivalry takes one step closer to the 2019 MLS Cup. If the Galaxy can pull off its second consecutive road upset, they’ll reach the conference final for the first time since 2014. An LAFC win would mean their first Western Conference final appearance.

More importantly, the winner will get the keys to the city of Los Angeles and all of the benefits that come with it. Attention, respect, the winning over of neutral fans. All while watching its rival get buried under a mountain of criticism and negativity.