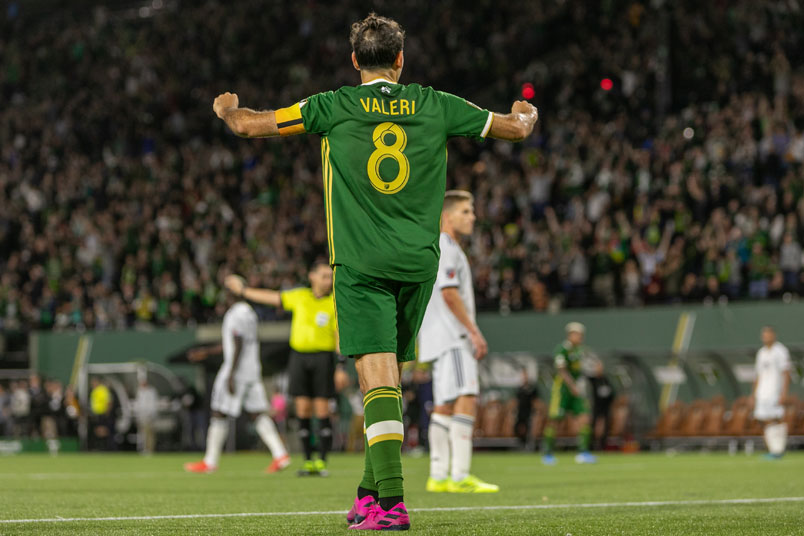 By Charles Boehm – WASHINGTON, DC (Oct 4, 2019) US Soccer Players – Last week, Real Salt Lake marked the 10-year anniversary of their underdog 2009 MLS Cup win. The club honored the members of that squad during their game against the LA Galaxy. One face was a particularly welcome sight for the home fans. Javier Morales, the Argentinean playmaker whose creativity and class powered the attack.

Morales’s return to Utah was an emotional moment, in large part because he’d left the club in contentious circumstances in 2016. After a decade of highly distinguished service, RSL decided to go in another direction and abruptly declined his contract’s option year for the following season. Stunned and hurt, “JaviMo,” who was 36 at the time, left for FC Dallas, where he played one season before retiring. Morales now coaches in Inter Miami’s fledgling youth system. It’s work that many thought he’d be doing for RSL’s respected academy by now.

“We’re human beings, and we have feelings,” Morales told reporters on Wednesday. “I want to think about the good things, and I spent here ten years of my life playing for this beautiful club…. I never had the chance to say goodbye to the fans, and now I think it’s a good opportunity after two years, I stopped playing soccer, and I’m back here, and I have that opportunity to have that feeling again, on the field, being there with the players, it’s something good. Of course, when I left the club it was not in the best way that I expect, but it’s something that I had to move on [from].”

In the salary-capped, cost-obsessed world of MLS, Salt Lake’s handling of Morales can be justified, even praised. He was clearly on the back side of his career, and his numbers had begun to drop off. Yet a strictly mathematical approach to the player risked undervaluing his legacy, and his intangible value to the club on the field, around the locker room and in the community. RSL’s most devoted fans took notice, the team’s results more or less took a middling trajectory after his departure, and the whole chapter left a mark.

Now the Portland Timbers find themselves in a comparable spot with a club legend of their own. Over the past few weeks, reports emerged that contract renewal talks with star #10 Diego Valeri broke down, leaving his future with the Timbers in doubt. Already a Rose City icon, Valeri won MLS MVP honors in 2017 and led the Timbers to the 2015 MLS Cup title and reached last year’s final. He’s scored 170 combined goals and assists in MLS regular-season and playoff action since arriving in 2013, 23 more than the next-most productive player during that span, Bradley Wright-Phillips.

Like Morales, Valeri and his family have made a happy home in both MLS and their adopted American cities, endearing themselves to fans not only with on-field performance but also their proud membership in the community. Valeri, his wife Florencia, and their daughter Connie are avid Portland Thorns fans. They take part in service events, play in local futsal leagues in the offseason, and have even helped paint tifo. In a place like Portland, that kind of spirit goes a long way.

Valeri is 33, at the tail end of the final guaranteed year of his Designated Player contract with a club option year for 2020. He reportedly seeks a two-year guaranteed extension and was said to be disappointed with the timing and nature of negotiations with the club over the summer. Portland is keen to open up that DP slot for a future big-ticket acquisition and prefer to make Valeri a TAM player going forward. The mere possibility of such a Morales-type exit has already inflamed at least a chunk of the Rose City faithful.

Valeri went so far as to climb up the Timbers Army’s capo stand in Providence Park’s north end at the conclusion of last week’s 2-2 draw with New England to “say goodbye” to the supporters, even though it wasn’t Portland’s last home game of the season. Was that a romantic gesture by a player who feels underappreciated, even disrespected by his club? A canny tactic to rally the fanbase as leverage in his negotiations? Perhaps a bit of both?

“There’s no doubt that we would love for him to stay here,” Timbers coach Giovanni Savarese told reporters afterward. “I personally would love to have him again for many more years and to retire here. He’s a quality player, he’s done a lot for this club, and today he again performed at a great level. Right now, it’s about what he’s been doing, helping us to try to make the playoffs, so that’s a conversation we can have furthermore because everyone wants him to stay here.”

The Timbers’ decision-makers must basically try to gauge their maestro’s individual performance bell curve like a vineyard handles their wine batches. How many seasons of elite performance has he got left, and what will the nature of those contributions be? Will he defy time, or compromise with him by evolving, perhaps into a supersub, or a deeper-lying tempo-setter, or a second striker with fewer defensive and ground-coverage responsibilities?

It’s a knotty task that RSL faced with Morales, Orlando City with Kaka, Columbus with Federico Higuain, Toronto FC with Sebastian Giovinco, and so on. Every player is different, finding a balance is tricky, and MLS rules effectively punish even the slightest excess of nostalgia. Longtime DC United fans will tell you that Marco Etcheverry, the chief orchestrator of their 1990s dynasty, probably remained at the heart of that team’s plans a little too long, and results suffered for it. Guillermo Barros Schelotto shrugged off his advancing years to lead the Crew to MLS Cup glory.

Valeri’s dedication to the Timbers tugs at the heartstrings. His 2019 numbers with eight goals and 16 assists in league play are quite healthy, even if some might place an asterisk given the number of “second assists” among them. There’s also data suggesting that his contributions are not necessarily declining, but rather are shifting in their nature.

Timbers leadership harbor doubts about his engine, with longer recovery time now required for his aging legs, and the extent to which the team is limited to counterattacking when he’s on the pitch. These evaluations are both art and science. Many would argue that for any club seeking to be just that, a club at the heart of a wider community and not merely a business, cannot be guided solely by spreadsheets, that the human element matters. The case of Morales seems to bear that out.

It’s an unenviable situation on both sides. Does MLS’s structure effectively force these painful rifts? Or does it merely expose the nature of the leadership and culture at particular organizations? Perhaps we’ll know more whenever, and wherever, Valeri takes the field in 2020.