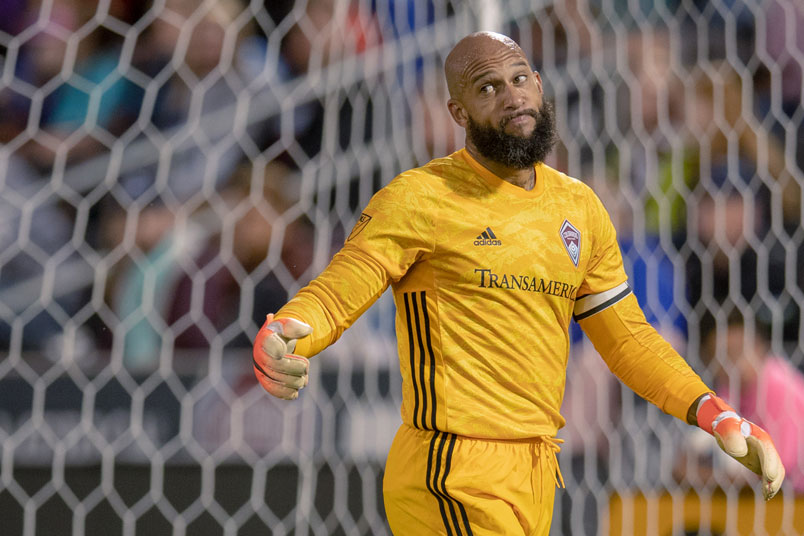 By Jason Davis – WASHINGTON, DC (Oct 2, 2019) US Soccer Players – Sometimes the metaphors are too easy. Too obvious, even. It doesn’t seem right when there’s no so little effort required. The most obvious metaphor for the Colorado Rapids 2019 season is right there in their name. “Rapids”. As in the rushing water of a stream or river, the kind that brave or foolhardy hobbyists sometimes like to ride in purpose-built watercraft.

If you’ve ever been whitewater rafting, you know that it’s not all a churning cacophony that is both exhilarating and frightening. Parts of the journey down a river featuring intermittent rapids are spent floating gently through calm waters. You move, sometimes quickly, but those moments are the relative quiet to the insanity of running whitewater.

Naturally, you don’t enter the river at a rapid. The beginning of the trip is just buildup. It’s later when things get crazy. As Decision Day arrives and the Rapids are somehow still alive for a possible playoff spot in the Western Conference, that part of the metaphor seems perfectly matched to their season.

The Rapids in 2019 started the campaign as at a leisurely, some might even say non-existent, pace. Colorado played more than two months of the season without winning a game. Through May 11, the Rapids had collected just two points and were on an eight-game losing streak when they played the Galaxy on May 19.

Colorado was, unsurprisingly, the last winless team in the league heading into that match. That run was a significant part of the reason the club fired coach Anthony Hudson on May 1. Though the Rapids were not considered contenders for MLS Cup going into the spring, a winter of recalibrating the roster meant a playoff spot was the expectation. That seemed less and less likely. In fact, Hudson himself thought the roster deficient and said as much following a 1-0 loss to Atlanta United in Atlanta on April 27.

“We come to a place where a team full of superstars and big money players and a massive, massive gap in class, and we’ve set up a different way. We are fighting at the bottom with a bottom group of players and we have to find a way to pick up results whilst also being a team that tries to play a certain way,” Hudson said, clearly his choice to throw numbers forward at the expense of the defense. “There are teams with a lot more quality than us. And that’s what we’re competing against. And no one talks about it.”

Hudson talked about it and ended up out of a job. Colorado is 23rd out of the 24 MLS clubs in total salary spend as of the September 30 MLSPA salaries information. Regardless, it’s never a good idea to state publicly that your players aren’t good enough to compete. Perhaps he was honest to a fault, with the Rapids opting to move in a different direction.

Under interim coach Conor Casey, the team responded. The Rapids picked up speed. They beat the Galaxy on May 19 to start a seven-game undefeated streak that ran through a 1-0 home shutout of LAFC on June 28. Over that span, Colorado collected 17 points. That was still a long way from a playoff berth, but it was a start. The Rapids played with more urgency under Casey and took advantage of a soft part of their schedule.

Names like Diego Rubio and Andre Shinyashiki rose to the occasion on the attacking end of the field. Jonathan Lewis arrived via trade with NYCFC on May 8 and immediately added a threat on the wing. The defense solidified under Casey, playing a more compact, cohesive style. Lalas Aboubaker, acquired via the seldom-used intraleague loan on the same day as Lewis, locked down a center back position and improved the Rapids at the back.

The Rapids suffered through a poor, winless July, but there would be more rushing water to come. The new attitude fostered by Casey wouldn’t dissipate because of a bad stretch. This Rapids team proved it could win games and would no longer play patsy in the West.

A pair of home wins in early August, including a 6-3 thrashing of the Montreal Impact, kept the Rapids in the playoff chase. With spots open in the postseason, a good result here and there was enough to ensure that Colorado never lost touch with the pack. The drama of the immediate post-Hudson period subsided, even while the club was laying the groundwork for a stunning finish.

Then came yet another change. Looking to establish a plan for the future before the season was out, the Rapids hired Toronto FC assistant Robin Fraser to be the club’s head coach. Whether Casey was ever considered for the permanent position is unclear. He was offered an assistant position under Fraser or the opportunity to coach the club’s USL affiliate, the Colorado Springs Switchbacks. Casey instead chose to depart. Fraser picked up where his predecessor left off.

Under their second new coach of the season, the Rapids have won five games out of six. Coming in cold, Fraser lifted Colorado even higher. That brings us to the eve of Decision Day and the possibility that a team that started the season 0-9-2 could make the playoffs. Yes, the MLS competition format is forgiving. That doesn’t make what the Rapids have done less remarkable. Colorado thumped FC Dallas 3-0 on Sunday to set the stage for a possible miracle on the final day.

Making the postseason will require help. Navigating the fast-moving waters of the last month only puts Colorado in a position to keep playing if they win and two other Western Conference teams lose. Winning means beating the Supporters’ Shield winner LAFC in LA, with Bob Bradley’s team chasing a points record.If they can beat LAFC, the Rapids will need Sporting Kansas City to beat FC Dallas and the Timbers to beat San Jose to secure an unlikely playoff berth. In MLS, stranger things have happened.

Even if Colorado doesn’t make the playoffs, what a ride. Going nowhere for two months. Playing under three different head coaches. Winning against the likes of LAFC, the Red Bulls, and beating the Galaxy twice, the Rapids remain alive with one game left.

Yes, the metaphor is easy and obvious, but that’s why it works. At the very least, no one can say that in 2019 the Colorado Rapids didn’t live up to their name.