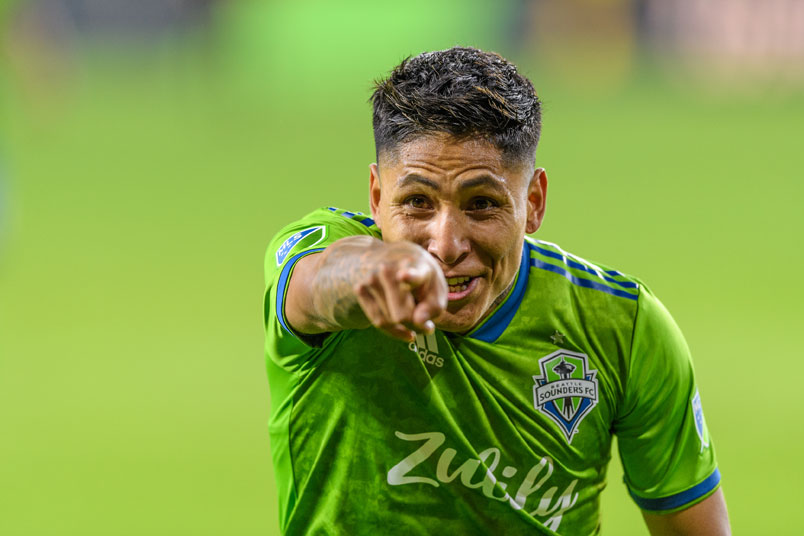 By J Hutcherson (Oct 31, 2019) US Soccer Players – If one thing stood out from the lower seeds advancing on both sides of the 2019 MLS Cup bracket, it’s that the same old truism still holds in this league. A standout player can make the difference, but one team doing even a slightly better job holding shape is more likely to result in a championship. That’s what turned a mismatch between LAFC and Seattle into a Sounders win and advanced Toronto FC past Atlanta United.

When coaches talk about space between the lines in MLS, what they’re more accurately describing is keeping their tactical shape. More often than not, games hinge on exploiting that space. It’s one thing to load up in the defensive third, another to play the game well defensively. Seattle went into their Western Conference final at Banc of California Stadium, stressing getting most things right. It may seem like an obvious point, but it’s the difference between giving up opportunities that will eventually happen over 90 minutes and making them easy.

Toronto FC did much of the same against Atlanta a night later. It’s fair to put weight on Josef Martinez’s missed opportunity from the penalty spot that would’ve doubled Atlanta’s lead just 11 minutes into the game. That would’ve undoubtedly changed things for both teams. There’s a Wikipedia page dedicated to the urban legend of the 2-0 lead, but Toronto backfooted Atlanta three minutes later. That shift reset things for both teams. Atlanta was in a situation where they had no choice but to press, and Toronto had two clear examples that things were going their way.

“As for Toronto and what they did well, they defended quite well,” Atlanta coach Frank de Boer said. “I just told the boys, I can’t blame the guys, of course we have to score our opportunities. We controlled close to 95 percent of the whole game. If you can do that against a side like Toronto, who likes to pressure high up and you saw in the end of the first-half, they were looking to the sideline and dropping more deeper and play more compact. I was really satisfied, and we had our chances. Of course, the penalty and maybe a red card, I don’t know what the rules exactly are, but you see a red card given in those moments, today they gave a penalty and a yellow card. If it was 2-0, they would have had to come more, but they quickly got the equalizer. That moment, we controlled the game again, and I really had the belief that we would score the second goal.”

What caught Atlanta was that quick shift in momentum. What had worked well turned into an unrealistic strategy chasing an equalizer. Atlanta had to worry about their defensive shape while trying to breakdown Toronto. Commit too much going forward, and space opens up to make things worse.

In the aftermath of the playoff edition of the LA derby, there were plenty of questions about space and basic defending directed at both teams. LAFC may have beaten the Galaxy 5-3 at home, but the tactical nuance from both teams was surprisingly lacking. Sloppy defending led to too many of the goals, creating a scenario where LAFC advanced but had questions to answer. Meanwhile, Seattle began to lock down its defense against Real Salt Lake in their Western Conference semifinal, showing in a 2-0 win how they might play the best team in MLS.

Nick Rimando’s swansong in goal for Real Salt Lake almost assuredly kept it from being 3-0 or worse. As a proof of concept for the Sounders, it showed that they could keep their defensive shape while capitalizing on opportunities. That held after going a goal down at LAFC. The Sounders got their equalizer five minutes later and were ahead for good within nine minutes of LAFC scoring. That 3-1 win ended up showing two things. Being compact defensively works against the team with the best regular season record in MLS, and sometimes the marquee players don’t turn up enough.

It’s not fair to put too much on Carlos Vela’s performance against Seattle. What the Sounders did defensively also frustrated Diego Rossi, Brian Rodriguez, and Adama Diomonde subbing in for Rodriguez in the 53rd minute, and Adrien Perez brought in for midfielder Lee Nguyen in the 76th. There’s a way of looking at that as Seattle beating two versions of the vaunted LAFC attack with the same tactic. Keep the spacing tight and focus on breaking up the passes that matter. LAFC was only called offsides once against Seattle. They took 654 passes to the Sounders’ 297. That was the gameplan, with the Sounders happily giving up the ball when they could control the game defensively.

Seattle did the same thing days earlier in that home shutout of Real Salt Lake. 317 passes to RSL’s 517 with the Sounders holding 38% of possession. Though the margin of difference was slimmer in the first round against Dallas, Seattle has yet to have the edge on possession in any of their three playoff games. There’s no big surprise with this version of Seattle. They’re going to keep shape defensively and maximize their opportunities.

It’s an easy enough assignment for Toronto to scout this club. coach Greg Vanney doesn’t necessarily need to lose sleep pouring over video to see what the Sounders are doing. For one thing, Seattle coach Brian Schmeter has been completely upfront about his approach. He’s got his team playing like the lower seed even when they’re not, changing very little for the one game when they weren’t at home. That’s a version of self-belief that makes them tough to figure out for the simplest of reasons. It’s working.