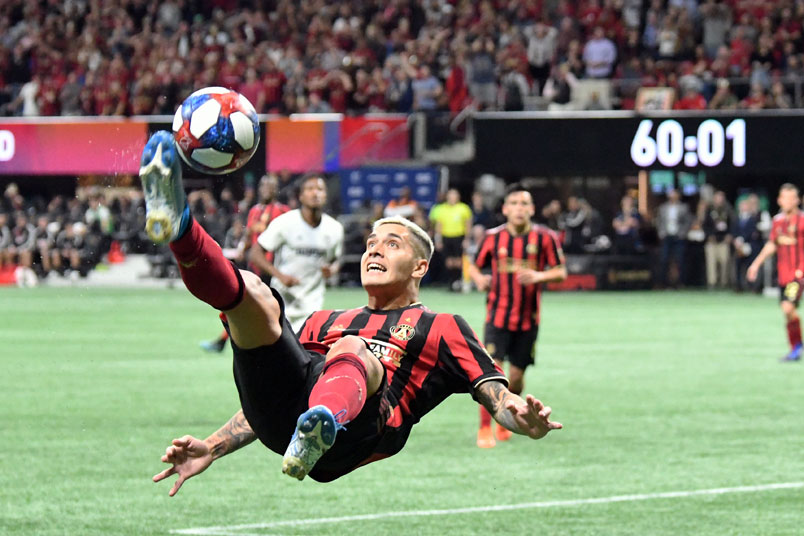 By Jason Davis – WASHINGTON, DC (Oct 30, 2019) US Soccer Players – Major League Soccer doesn’t have titans. Even the David vs Goliath narrative is an overreach because no MLS team truly merits the label of “Goliath” relative to any other MLS team. The traditional, non-specific designations used so casually in Europe like “big club” and “small club” won’t work in a single-entity league.

It’s not the lack of spending that prevents clubs from being big in MLS. Instead, it’s the inability to leverage spending into championships. Europe’s elite got that way because they collected trophies in the pre-modern era of the sport. They attracted enough fans to give them an edge over their domestic competition that they then used to win more championships. Everything that one of the world’s top teams might possess from transcendent talent, a large and regularly filled stadium, and an academy that turns out first-team quality players is largely a function of a head start.

In the modern era, reaching that level requires one thing. Massive influxes of cash. This is even true within most domestic league ecosystems. Without big clubs, MLS has finer margins. “Super David vs Goliath Lite” or something equivalent. The balance of power between two clubs can change from season-to-season, or in some dramatic cases, within a single campaign itself.

The Eastern Conference final on Wednesday night in Atlanta pits two clubs against one another who would like to shatter the notion that “big clubs” can’t exist in MLS. Both Atlanta United and Toronto FC possess ambition unique in the league. Both are willing to flex their financial muscles at a time when loosening cap rules might make their ascension to big club status possible.

Atlanta United will play in a second consecutive Eastern Conference final despite navigating the tumultuous waters of an offseason coaching change. There was no expectation that Frank de Boer would understand the peculiarities of MLS from game one. That learning curve showed in United’s early results.

De Boer took what worked for a championship club in 2018 and changed it. That’s a questionable choice on the surface, but one the club’s leadership likely signed off on. A look back at the early months of de Boer’s tenure as coach might even justify the shift. The 2018 version of United had a game-changing open field player in Miguel Almiron. Following his winter sale to Newcastle United, Atlanta was necessarily going to need to change approach

There were growing pains, but that growth has United on the doorstep of another final. De Boer relaxed his grip the team’s tactics, allowing more of the expressive, aggressive version of the team to come out as the year wore on. At the same time, de Boer turned Atlanta into a defensive juggernaut. Back in May, the Five Stripes set a new MLS record with five straight clean sheets.

United’s defensive task on Wednesday night will be a bit easier than de Boer and his staff might have imagined with Toronto in town. The Reds boast two of the League’s best attackers in Alejandro Pozuelo and Jozy Altidore, but a muscle injury has kept Altidore out of the playoffs.

As of Tuesday, Altidore’s status for the match was still uncertain. Toronto FC boss Greg Vanney indicated that Altidore would have a second MRI on the injury in Canada before flying down to join the team ahead of the game on Wednesday. The narrow chance Altidore is ready to play means Atlanta can largely prepare for a Toronto lineup without him.

The saving grace for the visitors is the confidence gleaned from two playoff victories short their top striker. Against DC United, Toronto struggled to put away the Black & Red before erupting for four goals in extra time. In the conference semifinal against NYCFC, Alejandro Pozuelo put the team on his back with a pair of goals.

Pozuelo is more effective with Altidore in the lineup, but he showed his knack for getting on the ball in dangerous areas against NYCFC. His energy forced an error at the back that led to the opening goal. That gave his team a chance to play from the front. Vanney deployed him as a false nine, a forward who drops deep to get on the ball, against NYCFC. He could use the same tactic again, or put Patrick Mullins into the lineup for a more traditional look.

Don’t be fooled into thinking that a return to the conference final is good enough for Toronto, despite last year’s playoff absence. TFC established itself as a leading light of MLS in the last few years, culminating with the triple trophy-haul in 2017. The Reds carry more salary than anyone in the league. While that in itself is not the full measure of ambition, it does speak to expectations.

It’s worth the reminder that Toronto held the second-highest scoring team goalless on the weekend and did it without Omar Gonzalez in the lineup. Gonzalez will be back in Atlanta, a boost for the Reds as they contend with Josef Martinez on the other side for Atlanta.

Martinez is the star player in the United lineup, but there are match winners across the team. De Boer possesses an embarrassment of riches in the attacking end of the field. That lets him shift from formation to formation depending on the challenge.

“Big” teams or not, the Eastern Conference final is a clash of the last two MLS Cup champions. These are two clubs at the leading edge of MLS’s move into the international transfer market and are willing to write checks unseen in the league as recently as a few years ago. When people mention “MLS 3.0”, they’re talking about Atlanta United and Toronto FC.

Call it a clash of the titans, if such a thing can happen in MLS. This looks like it might be only the beginning of a small handful of clubs redefining how we view the balance of power in the league.