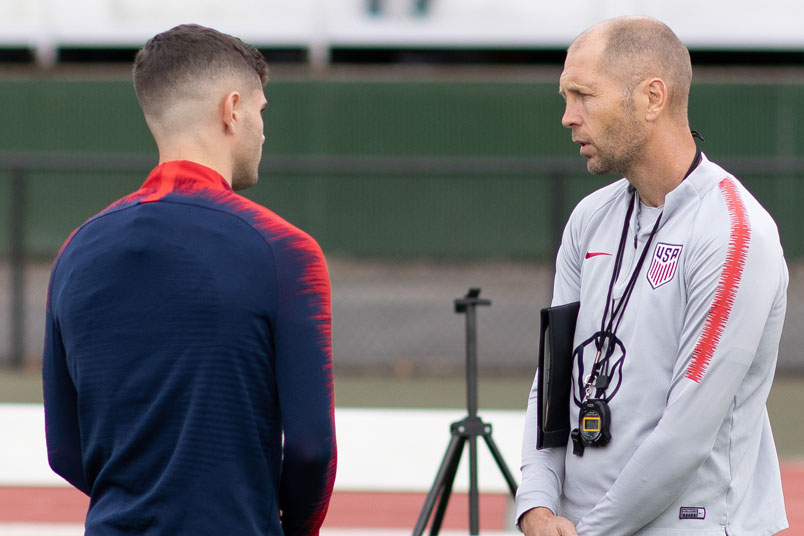 By Charles Boehm – WASHINGTON, DC (Oct 10, 2019) US Soccer Players – Focus, grind, progress, get the job done. That’s the short version of the USMNT’s outlook as they prepare to kick off the first edition of the Concacaf Nations League.

The United States is training in quiet isolation at George Mason University in the Northern Virginia suburbs of Washington, DC this week ahead of their Nations League curtain-raiser against Cuba at Audi Field on Friday (7pm ET – FS1). With continuity in the squad and continued absorption of coach Gregg Berhalter’s tactics and methodology, a businesslike mentality appears to dominate.

“We have a nice mixture, I think. We have some guys from overseas and then obviously bringing in the MLS guys who are towards the end of their season now,” said Christian Pulisic on Wednesday. “I think we complement each other well, that’s why we’re really excited to show it on the field Friday…. We still need a little bit of time, but I think we’re getting there. And I think we’re still on the right path. I’m still excited for this team and what the future holds.”

While the jury is very much out on this new competition, there’s a trophy and a place in the next Gold Cup to book. It’s also a useful opportunity to play competitive matches away from home ahead of 2022 World Cup qualifying next year.

“Nations Leagues, we want to put ourselves in a position to advance to the semifinals,” said Berhalter this week. “We think it’s a valuable tournament in the sense that you get to go away, you get to play in away stadiums. We haven’t faced that yet, so we think it’s valuable. We’re at a stage right now with our group where we’re going to use this in the right way and use this to learn and keep moving forward as a team.”

On paper, the USMNT are favorites to best Cuba and Canada and win Group A of League A. That would mean more Nations League games in June. However, it’s not quite as straightforward as it seems.

Cuba looks markedly overmatched in this group, having already conceded seven goals in two losses to Canada last month. The public would probably treat anything less than a US rout on Friday as disappointing. It could also be costly if goal differential later becomes a factor in the standings. Then the USMNT faces a quick turnaround on Tuesday’s trip to Toronto to face a Canadian side on their best form in many years, eager to ambush their southern neighbors. That figures to be a real test for Berhalter and his squad, though not one they’re willing to look ahead to yet.

“No, we don’t ever take a game lightly like that,” said Pulisic of Cuba. “It’s not going to be an easy match. No game is. we’re going to go in and treat them like a tough opponent, and we’re going to try to score as many goals as we can. We want to play the best soccer we can. We can’t take it lightly, or that’s when things will go wrong.”

“Our primary focus right now is on Cuba,” he said, before noting that Canada are “at the top of our group, so it’s just going to be a good game regardless; whether we play them home or away, we know it’s going to be a battle.”

Berhalter has been in charge of the program for nearly a year. A sense of familiarity has developed as a result. That passage of time shows in Pulisic’s evolution from the team’s fresh-faced phenom to a proven regular and quiet leader. Now 21, he’s no longer the youngest on the squad thanks to the presence of Sargent and 18-year-old newcomer Brenden Aaronson. Pulisic looks and sounds that way as well.

“I don’t see myself as young anymore,” said Pulisic. “This team, I see a lot of good things here and I’m excited and I’m confident going into the qualifying…. We’re going to go in a confident bunch of guys. We just want to go in and do our business.”

Making his first real visit to his parents’ alma mater, the Chelsea attacker appears increasingly comfortable in the US spotlight and happy to step back briefly from the steep learning curve he’s negotiating at his new club.

“I feel the best I ever have. I feel very confident in my game,” Pulisic said when asked about his limited minutes with Chelsea over the past month. “I’m not going to let any of that affect me. I feel very strong and I’m really looking forward to this game Friday…. This can help us to move forward towards that qualifying goal, these Nations League games. So we want to win this. That’s our immediate goal and we want to qualify for the World Cup, that’s the next big step. But we have to take it day by day and start with these games.”

Both internally and externally, the USMNT needs to show progress from last month’s friendlies against Mexico and Uruguay in their understanding and execution of Berhalter’s concepts. Even if there’s something of a no-win situation in the timing and nature of these two Nations League games, holding serve and ticking boxes is still a valuable part of a wider, longer process.

“I just think it’s looking at our objectives, what we want to accomplish in this tournament,” said Berhalter. “If we want to go to the next round, part of it’s going to be having to beat Cuba, and we know that. Then I think it’s about having a professional mentality and going out there and doing the business.”