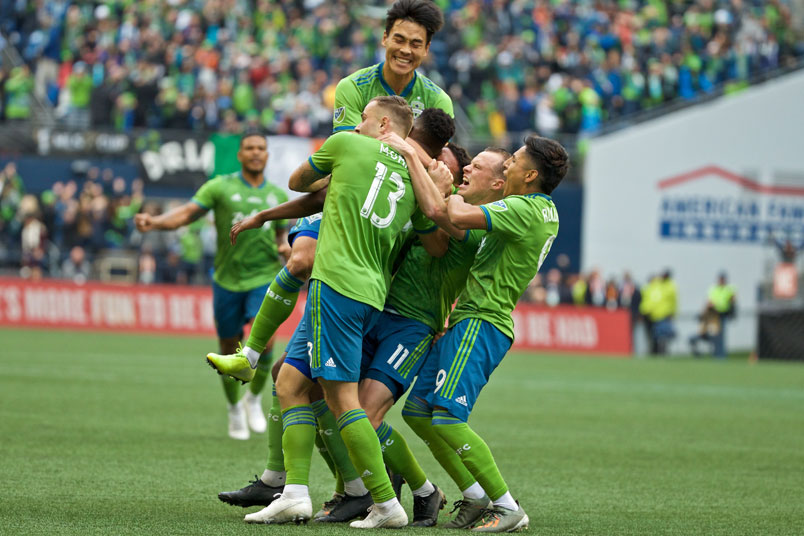 By Clemente Lisi – NEW YORK, NY (Nov 11, 2019) US Soccer Players – This is the time of year where the MLS champion, and congratulations to the Seattle Sounders, becomes the center of a debate over whether they are in the conversation for the best team in league history. It’s also perhaps the first time in a decade that the post-playoff debate isn’t about who’s the best ever.

MLS revamped the playoff format, resulting in close games and stunning outcomes. Ditching the home-and-away series for single elimination created a tighter format. The league has definitely found its sweet spot when it comes to the playoffs, holding MLS Cup Final in November, a month earlier than previous seasons. As for the final itself at CenturyLink Field on Sunday, Seattle and Toronto FC featured two of the best teams of the past few years. Like the playoffs themselves, expectations were high.

To Seattle the spoils after a 3-1 win at home. The Sounders absorbed the Toronto pressure for nearly 60 minutes before exploiting a defensive blunder to go ahead for good. It was a topsy-turvy final, mirroring the playoffs as a whole, to cap off a wonderful season. Here’s a look back at the past year and the five things that stood out most in 2019:

Los Angeles FC, in just their second season of existence, had the best record in the league at 21-4-9. Like so many other Supporters’ Shield winners before them, LAFC wilted in the playoffs. Only on seven occasions has the team with the best regular season record gone on to win the title.

That’s not great for Bob Bradley’s men, but that doesn’t mean that this version of LAFC is one and done. It’s a team loaded with talent. Above all, there’s league MVP Carlos Vela, one of the best players the league has seen in the Designated Player era. Here’s some proof to back up that statement. Vela’s 34 goals were three more than FC Cincinnati scored altogether as a team. He did that in 31 games.

LAFC could make a run next year in the Concacaf Champions League. This is a roster that, on paper, can compete with Mexican clubs. One has to wonder why they couldn’t at least get MLS Cup this season. Vela’s scoring partner Diego Rossi and assist-machine Eduard Atuesta are all slated to return in 2020. Happy days could very well be ahead of them.

What next for the Galaxy?

LAFC’s El Trafico rivals the Galaxy are in even worse shape. The days of Zlatan Ibrahimovic may be over in LA That means having to rebuild again. How they go about that will be a major storyline this winter.

As for the season gone by, the Galaxy finished 5th in the Western Conference. Not great, not awful, and not good enough given the preseason hype of another season with Zlatan. The team’s biggest problem was inconsistency. Making the playoffs isn’t enough, something the Galaxy epitomized this past season. While Ibrahimovic is the Galaxy’s best self-proclaimed player, and he did score 30 goals this season, Jonathan dos Santos is the most important. The Galaxy attack, however, wasn’t the problem. The defense was the issue, easy to spot in their playoff loss to LAFC. For starters, the team needs a better center back and a stronger midfield, while Guillermo Barros Schelotto’s 4-3-3 needs revamping. In other words, back to the drawing board.

There were definitely some standout rookies in 2019. Nonetheless, there seem to be fewer and fewer of them with each passing season as the game grows and develops players in different ways across the country. First year player may be a better way to look at the young arrivals in MLS, but the league still insists on no previous professional experience.

Andre Shinyashiki of the Colorado Rapids won Rookie of the Year in 2019. He deserved it under the rules, but there were other standout first-year MLS players that could’ve complicated the voting. The academy system is where it’s at in MLS. College is, with each passing year, the place where teams look for talent less and less. The draft has become almost meaningless now that the game and league have evolved.

New York City FC won the Eastern Conference after years of futility. They outlasted Atlanta United and local rivals the New York Red Bulls. Despite that, the playoffs were a disaster, and not just when it came to what we saw on the field. In many cases, it was the field. Using Yankee Stadium as their home field has become a liability for NYCFC. Not only is it a logistical nightmare, but it results in no home field advantage for NYCFC. Since the Yankees made the playoffs this fall, NYCFC had to play its Eastern Conference semifinal at Citi Field in nearby Queens, a baseball stadium that’s home to the New York Mets. That resulted in a defeat to Toronto FC. Just like that, the season was over. We may see a repeat next season. Again, NYCFC could make the playoffs, only to host MLS Cup at Yankee Stadium. That’s another scenario no one wants.

There hasn’t been too much recent talk regarding a new stadium for NYCFC. That’s the continuation of a major problem for the league that insisted on a club based in the Five Boroughs but didn’t specify a stadium. NYCFC in contention only makes this more obvious.

Keep an eye on DC United

Is success this season any measure of what a team can do next year? Not always, especially in MLS. The inconsistent nature of the league has made it difficult for what worked to carry over a long span of time. Seattle and Toronto can be a model, but neither is a dynasty. The team that is on an upward trajectory is DC United. They were 11th in the Eastern Conference in 2017, 4th in 2018, and 5th this past season. Given how competitive both conferences have become in recent years, DC United’s progress looks promising.

What about Wayne Rooney and Luciano Acosta? DC United regrouped around Rooney’s arrival and a back-loaded home schedule to make an unlikely playoff run in 2018. This season, they still made the playoffs even after Rooney’s announcement that he was leaving at the end of the season and Acosta’s drop in form. The disappointment from giving up multiple goals at home to Toronto in extra time to bow out of the playoffs at the first hurdle coincides with what this team has overcome. That includes the disruption of PSG’s interest in Acosta prior to the start of the season.

DC certainly didn’t end up matching preseason expectations, but they also didn’t collapse. Plugging them in as a title contender for next season might be a reach, but this is still a team with the parts in place to create a bigger whole.