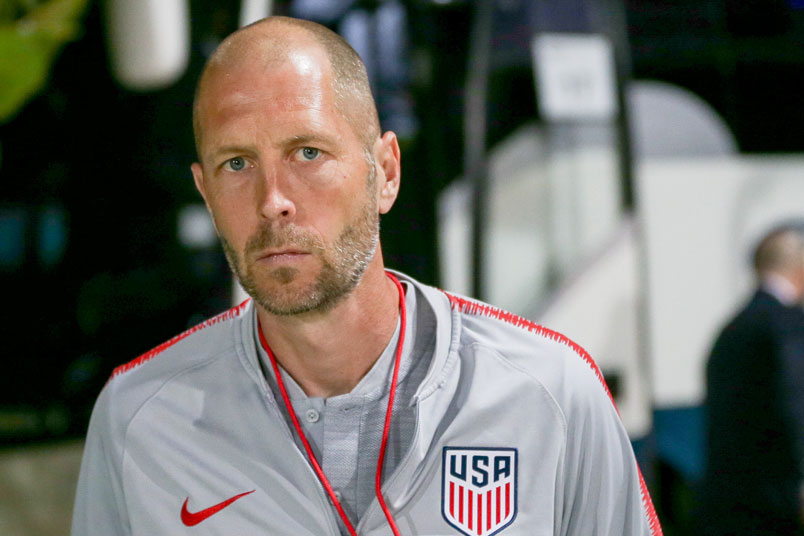 By Jason Davis – WASHINGTON, DC (Nov 20, 2019) US Soccer Players – The United States beat Cuba on Tuesday in the Nations League, bringing to a close its 2019 schedule. The scoreline was 4-0, though that number doesn’t say much about the team or its performance. The conditions at Truman Bodden Sports Complex only amplified the disparity.

It was one of those games that could be viewed both as a comprehensive victory and something of underwhelming performance. Even ahead of the game, it appeared clear that there wouldn’t be much to learn about the state of the team that we didn’t already know.

USMNT coach Gregg Berhalter made four changes from the team that beat Canada 4-1 on Friday, a nod to the need for continuity even as he endeavored to get playing time for players who didn’t feature in Orlando. He certainly could have made more, especially considering the quick turnaround and the quality of the opponent. Still, progress is a slippery idea that requires a more subtle touch.

Progress is also difficult to measure. While winning and losing is the most obvious outward measure of progress, results don’t necessarily tell the story of how a team wins. It’s possible, as was the case on Friday, for the USMNT to win a game going away but not control the flow or create numerous chances from open play.

Berhalter set the tone early in his tenure of a coach forcing a seachange on the USMNT. Whether the personnel matched his plan or not is a matter of opinion. The new boss was intent on turning the Americans into a team that could maintain possession, play out of the back, and dictate the tempo, regardless of the opponent.

Even when the US was struggling to play effective soccer with his preferred approach, Berhalter looked committed to the program. On the one hand, it was an admirable bit of stubbornness that spoke to Berhalter’s confidence that he could make it work. On the other, it was an obstinate tact that robbed the Americans of some of the qualities that characterized the team for the better part of three decades.

That all came to a head last month in Toronto when the United States lost to Canada for the first time since 1985. A listless performance against the northern neighbors brought intense criticisms Berhalter’s way. It’s one thing to lose. It’s another to lose without much of a fight.

For the November window, Berhalter adjusted. Against Canada on Friday, the Americans played much more direct, choosing to bypass midfield and look for attacking players running behind a questionable Canadian backline. Looking more like USMNTs of old, and led by Jordan Morris, the Americans romped. Set piece dominance and a devastating counter attack carried the day.

The easy expectation on Tuesday night was that the approach would revert to Berhalter’s original plan. Conceding the possession battle against Canada was because the USMNT went up a goal inside of three minutes. That forced the visitors to play from behind, giving the Americans more reason to draw them out. It was the practical approach. Against Cuba, where the Americans were massive favorites, it looked likely they’d switch back.

Instead, the old/new instincts carried the day. While the US controlled the ball against the overmatched Cubans, there was also a clear idea to play into space left by a disorganized opponent behind their defensive line. Why play six passes in midfield when a single 30-yard ball would do?

The 4-0 win over Cuba was effectively a training exercise. The mixed approach is probably not much more than a one-off event, stemming from the two months the USMNT just had, struggling with the transformative aspects of Berhalter’s approach. We shouldn’t attempt to glean too much from it.

Neither should we toss out this set of games entirely. While the harsh view says Berhalter betrayed his convictions, the kinder and more even-handed take is that he did learn enough over his first year in charge to recognize that “progress” must occasionally make way for results.

He stated as much directly in his post-game comments on Friday night. Berhalter used the phrase “parallel paths” to refer to the dual challenges of winnings games and pushing the team forward from a philosophical and stylistic standpoint. For coaches in charge of countries with defined styles and a predominance of talent, such a problem is rarely present. For coaches in charge of countries whose only hope of competing is to accept their fate as defend-first and counterattack, there’s no such quandary.

The USMNT is unique. It has both the ambition to raise its level and compete with the best soccer nations in the world. It also has obstacles as a developing soccer nation that means the best plan isn’t always the most progressive one.

Berhalter moves on his first year in charge. His team avoided the potential disaster of failing to advance in the Nations League. Now, there’s a semifinal in another set of games that count in June. Two losses to Mexico don’t look good, but the program should be allowed a reboot.

There are things working in Berhalter’s favor as he heads into year two with World Cup qualifying on the schedule. Christian Pulisic, absent from this camp due to an injury, is coming into his own at Chelsea. Highly touted 18-year-old fullback Sergino Dest committed to the US and will upgrade the positional pool. Morris is playing the best soccer of his career and should be able to carry his confidence into 2020.

At some point, Berhalter will get a chance to play Pulisic, Dest, Weston McKennie, Tyler Adams, and Josh Sargent together. None of those players are older than 21. All look like long-term fixtures for clubs in some of the best leagues in the world. Berhalter doesn’t get a pass because he hasn’t had the luxury of those players all healthy and in-form at the same time, but neither does it seem fair to fully judge him until he does.

The United States won a game against a poor team in a neutral setting on a difficult surface and did it comfortably. They took the lead just minutes into the game and played on the front foot for the vast majority of 90 minutes. At no point were they seriously threatened by the Cuban attack. Individual players emerged as potential key figures for games of greater import coming next year.

Lessons learned and filed away for the balance of 2019. Berhalter, ever the thinker, will distill them until the next time he calls together his full team, hopefully to good effect. He still has his mandate to change the USMNT, but he now also has a greater appreciation for picking the right moments to push that agenda. That’s enough, for now.