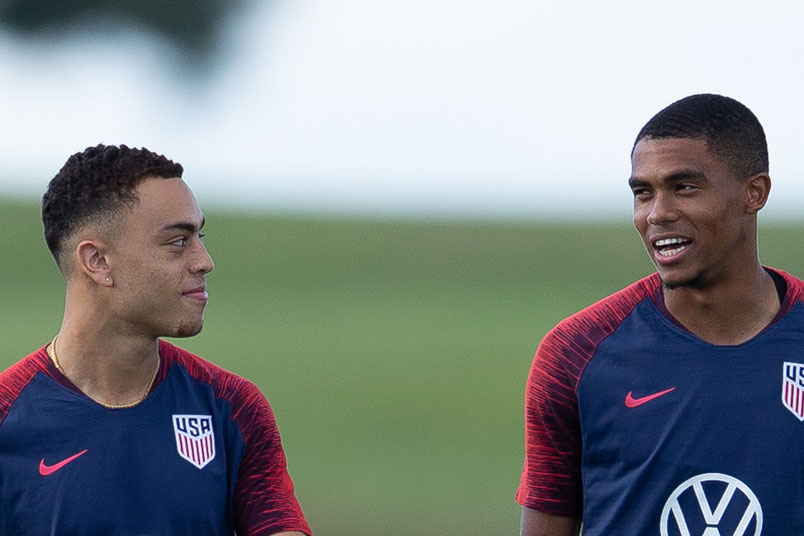 By Jason Davis – WASHINGTON, DC (Nov 15, 2019) US Soccer Players – The USMNT will face off against Canada on Friday night in an important match for both the current version of the team and the team that will push to qualify for the World Cup in 2022. As Gregg Berhalter reboots the national team in his role as head coach, a host of new names are making their way into the picture.

Youth is both a blessing and a curse in the game of soccer. A lack of experience can sometimes scare coaches off of playing them, but young players need a chance to prove themselves. After all, they’re the future of the team.

The USMNT is in transition on all fronts. There’s plenty of reason to be positive about what will come because of the influx of talent that Berhalter has at his disposal. The bar for young American players has never been higher. They’re contributing in competitive senior environments at clubs across North America and Europe at younger ages.

Two of the young names called in for the Nations League games against Canada and Cuba stand out among the next generation. It’s no secret that the USMNT has long struggled to find consistent play at the fullback positions. With the arrival of Sergino Dest and Reggie Cannon, there’s a new excitement around the future of the defense.

Focus this week in Orlando has naturally been on Dest following his highly anticipated decision to play for the USMNT over the Netherlands. At 18, Dest has already garnered praise for his play for Ajax both in the Eredivisie and the Champions League.

Cannon also deserves his spotlight, even as his path to a regular position in the team is a little more difficult than Dest’s. At just 20, Cannon is already among the top right-backs in Major League Soccer, cemented into the lineup at FC Dallas. His growth over the last three seasons is obvious both in the way that he plays and how he carries himself.

Immaturity has never been a problem for Cannon. It’s exactly because Cannon is so trustworthy that he was given his chance to prove his talent, first at FC Dallas and now with the USMNT. The difference between previous generations and this one is that for the head coach, the leap of faith inherent in turning towards a teenager or 20-year-old is shorter. In a team replete with young players, Cannon, at 21 years old, stands out as a vocal leader. His words belie his limited experience.

“Failure is the root of success,” Cannon said at training ahead of the match against Canada on Friday. “Everyone fails before they succeed. Otherwise, it would mean nothing. Thomas Edison failed 1,093 times before he finally discovered the light bulb. Honestly, it’s important that we let it hurt for this next game. People can call it a revenge match, and that’s football, but we’re going to be ready to respond.”

How many 20-something athletes are referencing Thomas Edison in their pre-game comments? That’s the norm for Cannon, a player whose pensiveness makes him unique not just among his peers, but throughout the class of professional players. Talent is often not the differentiator because who makes it and who doesn’t. It’s the ability to stay level headed and on-task that separates the successful.

With personal maturity comes on-field growth. Cannon’s ability to get forward into attack combined with improving defensive skill make him an excellent candidate to be a fixture in the USMNT through this World Cup cycle and beyond.

Those in and around the USMNT could see Cannon coming thanks to his exploits in the FC Dallas academy and his play for the U15 and U17 US Youth National teams. Dest was a different story. Born in the Netherlands, Dest never looked to be destined to play for the United States at any level. His arrival in the U-17 team thanks to the connections of former US Soccer coach Dave van den Bergh set him on a path that will reach a crescendo on Friday night.

Dest is versatile enough to play on both sides of the field. He typically plays on the right for Ajax but figures to be deployed on the left for the US. He’s good enough that smart soccer observers list him among the best fullback prospects in the world. Like many young defenders, he is still developing that part of his game, but he is already a menace going forward and a potentially massive piece of the USMNT puzzle.

Van den Bergh uncovered Dest’s American eligibility when checking on a different player in the Ajax youth system. Dest accepted an opportunity to play for the country of his father rather than wait on attention to come from the Dutch FA. Once that attention came, he stuck with where he played his youth national team soccer.

In fairness to the Dutch, the 18-year-old’s rise has been stunning. The timespan from his first game with Ajax’s top youth team, Jong Ajax, to his debut with the senior side was only ten months. Dest quickly established himself as a key player for the team that would eventually go on to the semifinals of the UEFA Champions League. Ajax manager Erik ten Hag never hesitated in giving Dest a chance to play both because of the player himself and the culture at Ajax. The pull of the Dutch national team must have been intense, and Dest himself admitted he had always dreamed of playing for the Orange.

At 18, personal relationships mattered more to Dest than the legacy of a team that can boast of Cruyff, Gullit, van Basten, and Bergkamp. Call that an upset if you want, or call it what it is. A very personal decision made by someone with his reasons for it.

Let’s forget for a moment the differences in the depth of their respective histories. There’s a common thread between the two club teams represented by this possible fullback pairing of the near-present and future. Both FC Dallas and Ajax care about bringing young players through the system to the first team. The culture dictates that it’s not how old you are or how much the club spent on you that matters, just that you can play.