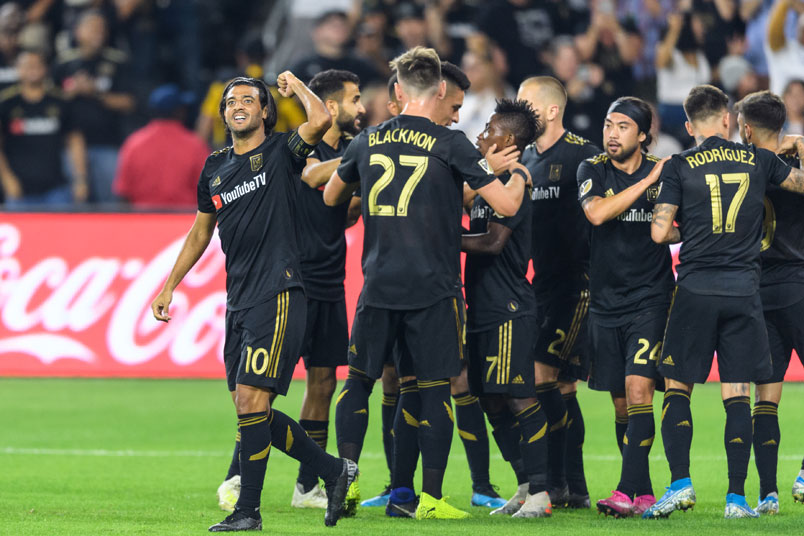 By Jason Davis – WASHINGTON, DC (Nov 6, 2019) US Soccer Players – Truly historic seasons are easy to spot. They come with gaudy numbers and long winning streaks. They seem to buck the odds and cut against the type of bad luck that invariably affects everyone. They are marked by great individual campaigns that reflect on the work of the team as a whole. They always prompt debate, particularly when there’s room for disagreement about where a new historic season ranks against previous ones.

LAFC’s 2019 falls into that category. The numbers say plenty about just how good the second-year MLS club was through 34 games in the regular season. In addition to setting a new mark with 72 points earned at a 2.11 points-per-game average, LAFC tied the all-time single-season total for goals scored with 85 and beat the best goal-differential in a season by seven at +48).

A loss in the Western Conference final ended LAFC’s year and ruined a chance at the best-ever season in MLS history. LAFC joins a famous group of American teams who stumbled before reaching the finish line.

First among that group is the 2007 New England Patriots, a team that managed the most elusive of NFL achievements with an undefeated regular season. The ’07 Patriots went 16-0, becoming the first team to go unbeaten since the famed 1972 Miami Dolphins. New England did the Dolphins a few better since the NFL season was 14 games back then. Tom Brady’s team looked unstoppable. New England cruised through the playoffs, reaching the Super Bowl for the fourth time in seven years. They were a 12-point favorite over the New York Giants.

The Pats couldn’t finish the job. After winning the AFC Championship, New England scored its fewest points in any game that year in the Super Bowl against the Giants. It took an unlikely sequence of events for New York to prevail, including the famous “helmet catch,” but the Patriots ended the season without the championship they seemed certain to win.

Instead of ascending into the pantheon of all-time great football teams, the Patriots became something of a footnote in history. If the question of the greatest regular season teams in NFL history comes up, New England will rightfully be there. A conversation about the greatest teams of all time, with no qualifiers, will leave them out.

At least the Patriots got to play for a championship. LAFC has more in common with the 2001 Seattle Mariners, a team that crashed out in the American League Championship Series despite rolling to 116 wins during baseball’s regular season. Led by Ichiro Suzuki, the Mariners tied a record nearly a century old over 162 games. The only other team in baseball history to win 116 times was the 1906 Chicago Cubs, a team that notably also did not win a championship.

The 2001 season still resonates as a highwater mark for the Mariners franchise among its ardent fans. Still, the pain of missing out on a World Series championship trumps the joy that stemmed from the remarkable regular season. It’s much more about what could have been than what was.

“Best regular season teams of all time” is not a good list to be on. American sports leaves no room for “almost great.” The measure of a champion is by both the long regular season schedule and the short burst of drama-packed playoff games. At least in the other North American sports, there’s that clear distinction. As one of the few topflight soccer leagues with a playoff system, it’s a different scenario for LAFC.

If LAFC put together 34 games of dominance in England, Spain, France, Italy, or dozens and dozed of other countries, they would be champions. In the United States, the Supporters’ Shield awards to the league’s top team in the regular season is little more than a consolation prize. Some within the league attempt to elevate the importance of the points title, but as long as MLS celebrates the MLS Cup winner as champion it amounts to little more than lip service.

Unlike the Patriots and Mariners, LAFC will have a chance at redemption in short order. NFL and Major League Baseball seasons are wholly contained units. There’s not much to connect one season to the next. It’s a full calendar year between Super Bowls and World Series, with no guarantee that another shot at the title will come.

For MLS clubs, however, the Concacaf Champions League presents an opportunity to build from the success of the previous season during the initial stages of a new one. Even for teams that missed out on a championship the year before, the Champions League holds the promise of even greater glory.

No MLS team has won the Champions League in the current format. Historically great teams have tried and come up short. The Mexican grip on the tournament remains an issue for Major League Soccer. Breaking that grip would elevate the MLS team that manages it.

Winning a league title is one thing. Every season produces an MLS Cup champion. It can be a remarkable achievement if paired with a historically great regular season or a dramatic run of upsets. No season in the modern era of MLS has produced an MLS winner of the Champions League. If LAFC wants to claim history, following up the disappointment of this year’s playoffs with a run to the continental title next spring is the best way to do so.

It won’t be the same team. Nothing will change the end of this season. Still, it’s something. That’s more than the 2007 Patriots and the 2001 Mariners got.