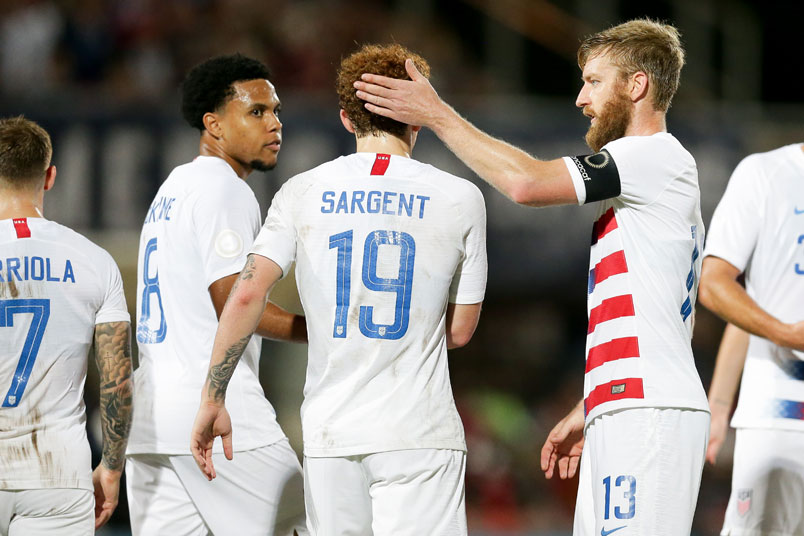 By Charles Boehm – WASHINGTON, DC (Nov 21, 2019) US Soccer Players – After the USMNT’s one-sided 7-0 Concacaf Nations League win over Cuba at Audi Field last month, Michael Bradley was asked for his opinion on the confederation’s new tournament. The veteran midfielder was honest in his assessment.

If you had to sum up the USMNT’s ongoing, big-picture challenge of the past quarter-century in a nutshell, that paragraph does a pretty apt job of it.

A few days later, the United States got a taste of the dangers that this region’s unique quirks can pose when Canada ambushed them 2-0 at Toronto’s BMO Field in a hectic, edgy encounter. As happened too many times during the 2018 World Cup qualifying cycle, the US was caught out by the distances, uncertainties, and often-scrappy style of soccer encountered in Concacaf and paid the price.

October’s setback forced the USMNT into two must-win situations as they concluded Nations League A, Group A play this month. They duly responded and will now advance to face Honduras in the competition’s semifinals next year.

“Our backs were definitely up against the wall,” said center back Aaron Long after Tuesday’s group-clinching 4-0 win over Cuba, “and I think we responded well. We showed our true colors, which is what we wanted to do at the end of this camp, so it’s good to end 2019 in this manner.”

That recovery of equilibrium provides positivity at year’s end, albeit in a modest fashion given the circumstances. Coach Gregg Berhalter’s implementation of his preferred philosophy looks incomplete, with direct play featuring more this month than in the past. Large swathes of the country’s soccer public are still waiting to be won over. Importantly, however, lessons appear to have been learned that may prove quite useful as 2022 qualification cranks up next year.

“We grew a lot together as a unit, we grew into the style, we learned how to adapt to different games, we learned how to play on the road,” added Long, noting just how many firsts this youngish squad navigated in 2019. “We had a lot of ups, a lot of downs, but overall, we’re really happy with the year.”

Almost nothing is quite what it seems in this confederation. Constantly drained of talent by wave after wave of player defections, Cuba was a mostly over-matched opponent. They couldn’t even enjoy home field advantage due to infrastructure problems at their home stadium in Havana, exiling them to the Cayman Islands. The USMNT still had to travel a hefty distance in a relatively tight window, then negotiate an uneven playing surface in a game day atmosphere more akin to a junior-varsity game than a competitive international. They’ll meet tricky situations like that when the Hexagonal kicks off next Fall.

“We knew it was going to be a difficult game in these conditions. I think we came out with a good mentality, good focus, and we got the job done,” said Jackson Yueill, who again played well in central midfield in his fourth start, and fifth career cap, of 2019.

This Nations League group was a prime example of the high-risk, low-reward situations that Concacaf play so often serves up to the USMNT. Several of this month’s eight goals scored weren’t moments of unforgettable beauty. The aesthetics of the overall performances probably didn’t quite match coach Gregg Berhalter’s ideal. The job got done, and thus this new group will get at least one more competitive game in which to continue their progress together.

“We had a number of challenges this year that the group needed to respond to, and I think we responded well,” said Berhalter postgame in the Caymans. “When I look at our overall goals of the year, it was to win the Gold Cup and to qualify for the semifinals of the Nations League. And we came up short in the first one, but we achieved the second one. Overall I think it was a really good year of development for this group.”

As Bradley alluded to, there’s a sort of tactical code switching that the USMNT has always had to juggle. That probably won’t change for some time to come. Be resilient, forceful, and pragmatic to keep the region’s minnows from turning into piranhas. Shift to ambitious and brave when playing the likes of Mexico and elites from Europe, South America, and beyond.

“As we move forward to 2020, it’s an exciting year. We’re going to have some friendlies in Europe against high-level opponents, which is going to be a great test for this group,” said Berhalter. “We move into Nations League semifinals and hopefully finals, and then we start World Cup qualifying. So this group is really going to get tested in 2020, and we’re looking forward to the challenge.”

For all the sound and fury that’s roared through the discourse when the USMNT hasn’t met expectations, there seems to be a quiet optimism taking sturdy root in the squad. Should the process stay on or near that positive trajectory, we may eventually look back on 2019 with a rosier lens than most are applying at the moment.

“I think it’s the first time in a while this team has, I don’t know, felt something special happening,” said young striker Josh Sargent on Tuesday. “It’s been a long journey, obviously, and we still have miles to go. But each camp we’re trying to come in, learn more and more, and get to know each other better. I think every camp it’s getting better. Whether we win or lose, we’re always taking something out of the games and I think we’re progressing really well.”