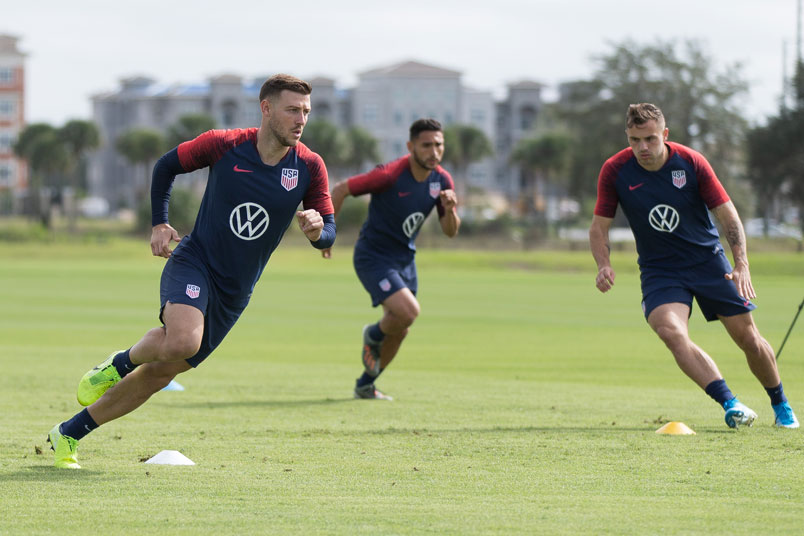 League A, Group A of the Nations League resumes on Friday with the USMNT hosting Canada in Orlando (7pm ET - ESPN2). The game is a quick remedy to how the October window ended for the USMNT. The 2-0 loss to Canada at BMO Field has raised the volume of complaints around the USMNT looking to move forward under coach Gregg Berhalter. They now face a scenario where it's Canada top of the Group A table with 9 points from 3 games with the USMNT in 2nd-place with 3 points from 2 games. Canada advances to the Nations League semifinals with a win or a draw regardless of what the USMNT does against Cuba on November 19 (7:30pm ET - FS1).

Concacaf wanted games that count in place of friendlies, and this one certainly satisfies. The USMNT is in a necessary win scenario in a window where that didn't use to exist. Taking advantage of this as an opportunity to show that the team is progressing would turn down the volume and give the team time to continue working out Berhalter's tactics and strategies. It also gets them another set of games that count this summer.

With the pressure on the USMNT to beat Canada, here's what we're looking for from Friday's friendly in Orlando.

It's easy to build up Canada after the loss in Toronto, but this isn't a new challenge in Concacaf. They've got one standout player in Alphonso Davies, who has improved since his move to Europe. That's not a new scenario in this region. Once upon a time, Trinidad & Tobago had Dwight Yorke as their striker as he showed a Concacaf player could win titles in the Premier League and Champions League. Paulo Wanchope made Costa Rica a tougher assignment while playing his club soccer in England. Raul Diaz Arce was in MLS when he turned El Salvador into a problem during the 1998 qualifying cycle.

Dealing with a national team centered on one or two players means stopping one or two players. Canada lacks the complexity of Mexico or the United States, and that should show over 180 minutes. What will stop that is getting too clever and letting Davies have enough space to beat them. Making him earn those moments rather than providing them will change the scope of the game in favor of the United States.

USMNT coach Gregg Berhalter has little choice but to defend his tactics and move forward with his bigger picture. It's what got him the job. That shouldn't stop him from pressing pause when necessary and letting players play their game. That bailed out those older versions of the USMNT more than a few times over the years.

Berhalter didn't catch a break with his roster, losing goalkeeper Zach Steffen, midfielder Michael Bradley, and winger Christian Pulisic to injury. All three are key components for what Berhalter wants from his squad. Steffen is now established as Berhalter's first choice goalkeeper but is out with a tendonitis issue. For Bradley, it's an ankle injury picked up during Sunday's MLS Cup. Pulisic has a hip concern.

It's no exaggeration to look at the absence of those three players as creating issues all over the field. Steffen is a different goalkeeper than Brad Guzan, but there's no discounting Guzan's experience in goal for the USMNT and Atlanta United. Bradley played 90 minutes against Canada in Toronto, giving a veteran more information on what needs to happen in Orlando. Pulisic is the spark for this version of the USMNT, demonstrated by the articles plugging in Weston McKennie for that role with the current squad. McKennie is certainly capable of changing a game on his own.

Jordan Morris on the run

If there's one takeaway the USMNT staff should make from the 2019 MLS playoffs, it's that Jordan Morris is excellent on the run. He doesn't necessarily need service to keep the ball and beat the backline. He's capable of holding onto possession and judging opportunities in real time, something of a rarity these days. Having a player willing to charge forward is a benefit for the USMNT, even if it means not pushing the ball down the wing and looking for a cross. Morris can play that way too, something he's shown at national team level. He's more dangerous making that cutting move with the ball at his feet, something that destabilizes even the best defenses.

Instead of look back forwards who wait for the defense to move, Morris moves the defense with his runs. The US wasn't called offside at BMO Field, something that might seem like a positive but only shows that they weren't pushing a physical player up against the backline looking for the ball. Morris can be that for the USMNT, and it's an asset.

All credit to Canada coach John Herdman who used motivation more than tactics to create the environment for his team to succeed. Playing up their role as the underdog and highlighting the lengthy winless streak against the USMNT worked, at least over 90 minutes. It's tough to maintain that level of "us vs them" between international windows. This version of Canada playing in the US has no choice but to adjust. There's not going to be the same push from the home crowd or the feeling that this is a statement game. Canada already made that statement. Now, it's showing that they're the force in League A, Group A.

With a three-team group necessitating an unbalanced schedule, this is Canada's final Nations League game. That means a win or a draw advances them while a loss means waiting on Cuba vs USMNT and goal difference as the first tiebreaker. To be in this position is a major step for Canada. For better or worse, they're now a team that nobody else in Concacaf is likely to underestimate in this cycle.