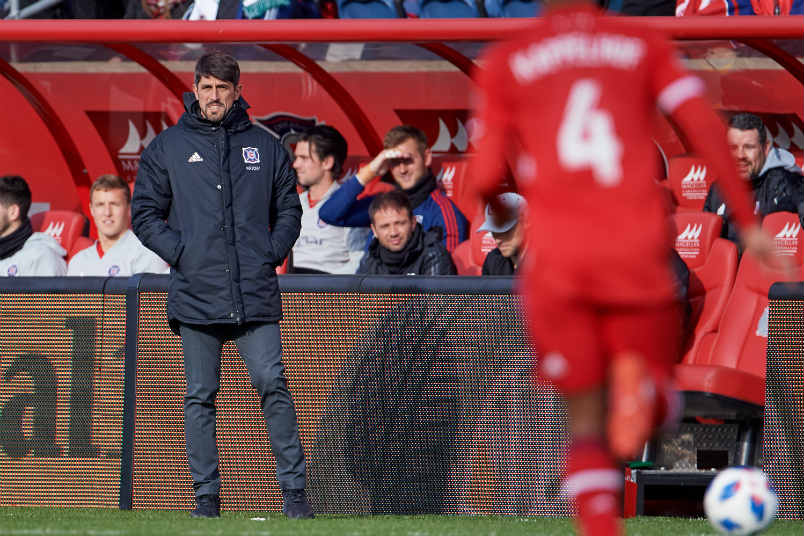 The soccer news starts with a coach leaving in Chicago and a surprise hire in Montreal. The Fire announced that MLS classing “parted ways” with coach Veljko Paunovic. The situation for the rest of the coaching staff and trainers is up to the next coach, though the Fire has “discontinued” their services for now.

Chicago is in a partial revamp, moving from Bridgeview to Soldier Field and losing their biggest name with Bastian Schweinsteiger retiring. Their next coach comes into a situation that will allow for a major offseason revamp. Though MLS doesn’t suffer as much as in Europe with coaches insisting it’s not really their team until they go through multiple transfer windows, the Fire is in a position some coaches might prefer. For others, there’s not enough left in a league like MLS to lessen the difficulty of the job.

Taking over as coach of the Fire hasn’t gotten any easier. Paunovic’s version may have disappointed last season, but this didn’t look like a club capable of surprising any of the Eastern Conference contenders. That can certainly change between now and March, but it’s a lot of moving pieces for a team that spent this decade mostly not qualifying for the playoffs. The two times they managed to make the postseason were both knockout round exits. That may not matter to the new investor/operator recreating the team in an NFL stadium by Lake Michigan, but it’s something anybody interested in the job should consider.

On the same day, another Eastern Conference team made a big move. Thierry Henry returns to MLS as the coach of the Montreal Impact. Henry retired as a member of the New York Red Bulls following the 2014 season, taking an assistant coaching job with Belgium in 2016. From there, he got his first club opportunity as head coach of Monaco in Ligue 1 in October, 2018. Monaco fired Henry in late January, 2019.

“It’s an honor to coach the Montreal Impact and return to MLS,” Henry said in a press statement. “It’s a league I know well, in which I had some very nice moments. To be in Quebec, in Montreal, which has an enormous multicultural heritage, it’s extraordinary. I’ve always kept an eye on the club and now I’m here.”

The Impact went through two coaches during the 2019 season. They fired Remi Garde in August, bringing on recently dismissed Houston coach Wilmer Cabrera in what turned out to be a deal only lasting until the end of the season. Montreal finished in 9th-place, a point behind Chicago.

Not unlike the Fire, what Montreal is trying to prevent is irrelevancy. Beating Toronto for the Canadian Championship and a spot in the Concacaf Champions League doesn’t really register south of the border. If anything, that only adds a further complication to Henry’s job.

What counts in MLS is more than just making the playoffs. It’s contending throughout the season. That’s the clear message the clubs doing well at the gate are sending, not that it’s any surprise. With MLS at 26 teams this season, it’s even easier to get lost in the churn of the schedule. Whoever takes over in Chicago will join Henry in trying to prevent that from happening all over again.

Also in the MLS news, Darlington Nagbe is now a member of the Columbus Crew with Atlanta getting $900k in Targeted Allocation Money and $375k in General Allocation Money that could increase by $375k along with an international roster spot.

“Darlington Nagbe is a proven winner and the type of player who can be a difference-maker in our team,” Columbus GM Tim Bezbatchenko said. “In addition to his skill set, we believe that Darlington is someone whose character and values fit well within our organization. As we stated heading into this offseason, we continue to look both domestically and internationally for players that will make our team better, and we believe Darlington is an important part of those efforts.”

The LA Galaxy announced that Zlatan Ibrahimovic has officially left the club after scoring 52 goals in 53 starts. “We would like to thank Zlatan for his contributions to the LA Galaxy and Major League Soccer,” LA Galaxy president Chris Klein said. “Since his arrival in 2018, Zlatan has positively influenced the sport of soccer in Los Angeles. We are grateful for his work ethic and passion. We thank Zlatan for his professionalism and immeasurable impact on the Los Angeles community and the soccer community in North America as a whole.”

MLSsoccer’s Matthew Doyle works through the brief Zlatan era in LA. The Guardian’s Graham Ruthven looks at what Ibrahimovic is leaving. KCRA updates the situation with Sacramento’s stadium deal. SI.com’s Grant Wahl reports that Landon Donovan will be the coach of San Diego Loyal in the USL Championship. Yahoo Sports’ Henry Bushnell on the situation with the USMNT and treating a national team like a club team.

I came, I saw, I conquered. Thank you @lagalaxy for making me feel alive again. To the Galaxy fans – you wanted Zlatan, I gave you Zlatan. You are welcome. The story continues…Now go back to watch baseball pic.twitter.com/kkL6B6dJBr