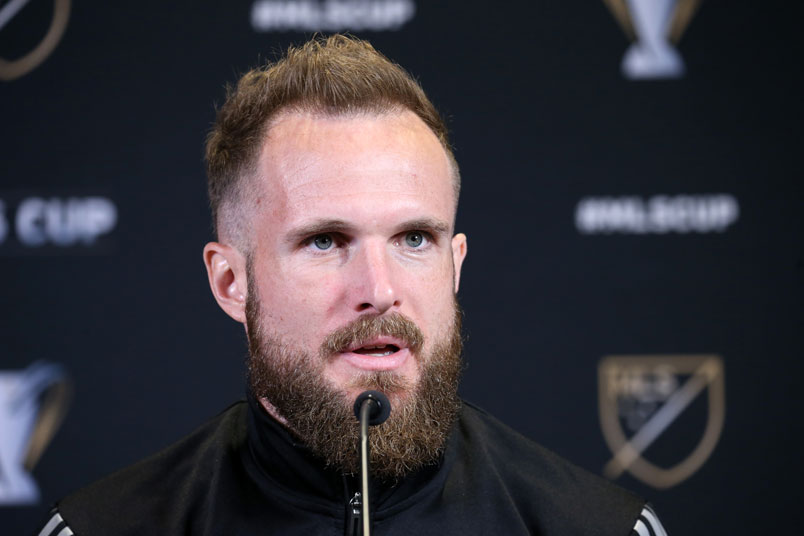 By Jason Davis – WASHINGTON, DC (Nov 8, 2019) US Soccer Players – In 2016, the Seattle Sounders lifted the MLS Cup at BMO Field in Toronto following a tense, goalless affair against the home side. The hero on that day was goalkeeper Stefan Frei, who made several crucial saves to help his team to victory. That including a jaw-dropping stop that ascended to the top of the list of all-time great championship game saves. It was an improbable championship for Seattle. Not just because it required heroics from Frei, but because the Sounders faced so much adversity through the 2016 regular season.

In late July the team foundered near the bottom of the Western Conference. That cost coach Sigi Schmid his job. Seattle’s poor start looked like an insurmountable obstacle for a team that perennially harbored championship ambitions.

Just as the club’s turnaround hit full stride, the Sounders lost their emotional leader and a key part of the attack with Clint Dempsey sidelined with a heart ailment. Suddenly, Seattle had to learn how to win without Dempsey in the lineup. Beyond just his goals and assists, Dempsey set the fighting tone for his team.

Interim head coach Brian Schmetzer found a way to succeed despite the loss of Dempsey and the desperate climb back into the playoff conversation. Dempsey’s absence didn’t help the Sounders on the way to the title, but neither did it ruin the season. Internally, it might even have served as a catalyzing factor in the club’s run.

The 2019 Sounders are hoping an unforeseen absence from their roster has the same sort of impact on their season. Chad Marshall’s shocking decision to retire from professional soccer on May 22 was the right decision for the player, but it removed from the Sounders a three-time MLS Defender of the Year who served as the anchor of the defense.

Few teams could replace a player like Marshall, even with a full offseason at their disposal. The Sounders did so on the fly, in the middle of a campaign that started with so much promise. Unlike the previous seasons that ended with the Sounders playing for a championship, 2019 started strong. Stress levels in Seattle were lower than they’d been in years until Marshall’s decision. Schmetzer’s job now involved covering for an effectively irreplaceable defender.

In 2016, the Sounders got a boost just as Schmid departed when Nicolas Lodeiro joined the team. If any single player gets the credit for the Sounders championship that season, it’s probably Lodeiro. His four goals and eight assists in 13 regular season games was just the appetizer for four more goals in six playoff games.

It’s more difficult to quantify the contributions of a defender. The 2019 Sounders got their defensive addition just as Marshall was exiting the professional stage. Like with Lodeiro’s acquisition in 2016, the move to sign center back Xavier Arreaga was unconnected to the loss of the veteran leader. The Sounders were planning for life after Marshall even as 2019 unfolded, likely aware that depth at that position was going to be critical.

Arreaga entered a rotation that already included Kim Kee-hee and Roman Torres. He eventually started 12 games through the balance of the season, helping to ease the transition to the post-Marshall era. While the Sounders did struggle with their defensive structure, it was enough to push the team into 2nd-place in the Western Conference.

With Torres suspended by MLS for testing positive for a performance-enhancing substance and then missing games with a hamstring injury, Arreaga stepped in to carry the team through. Even with Torres back as the playoffs began, Schmetzer stuck with Arreaga. The Sounders charged into the playoffs. First came a wild 4-3 home victory over FC Dallas and then the stunning upset of LAFC at Banc of California Stadium.

Arreaga played the role of the intimidator against the Supporters’ Shield winners, notably knocking Carlos Vela down on two occasions to set the tone of the game. The Sounders approach involved much more than some physical treatment of the eventual League MVP, but it’s obvious that it was part of the plan.

The most significant common denominator between the 2016 and 2019 Sounders teams is the man at the helm, Brian Schmetzer. In 2016 Schmetzer was new to the position of MLS head coach, but not new to the job of head coach of the Sounders. His steadying influence in the wake of Schmid’s ouster was just a continuation of the work he’d done in Seattle since the club’s days in the lower divisions. Known as a “player’s coach,” he remains conspicuously close to his squad. Beyond the somewhat trite notions of loyalty, what that means is that Schmetzer’s players trust his plans.

Those plans were key to the run to the title in 2016. The same has happened on the way to Sunday’s MLS Cup final. The whole of the American soccer community is now waking up to Schmetzer’s role in turning Seattle into the league’s most consistently successful team. It took entirely too long for the unassuming Seattle native to get his full due.

Every team faces obstacles during the season. The ability of a team to overcome those obstacles determines success. Find a way to deal with injuries, international call-ups, the off-the-field events that can derail a player’s form, and so on. Do it with the right timing, and you might win a championship.

Occasionally teams luck their way into trophies. MLS might have more examples of it than most leagues. The measure of an organization and the people running it, like Schmetzer, is regularly playing for trophies no matter what the obstacles. Luck can push a team to a title in a single season, but greatness is a multiple-year enterprise.

The Sounders navigated Dempsey’s unforeseen absence in 2016 and won a championship. In 2019, they’re back in the final despite losing Marshall much earlier than planned. It’s starting to become a habit.