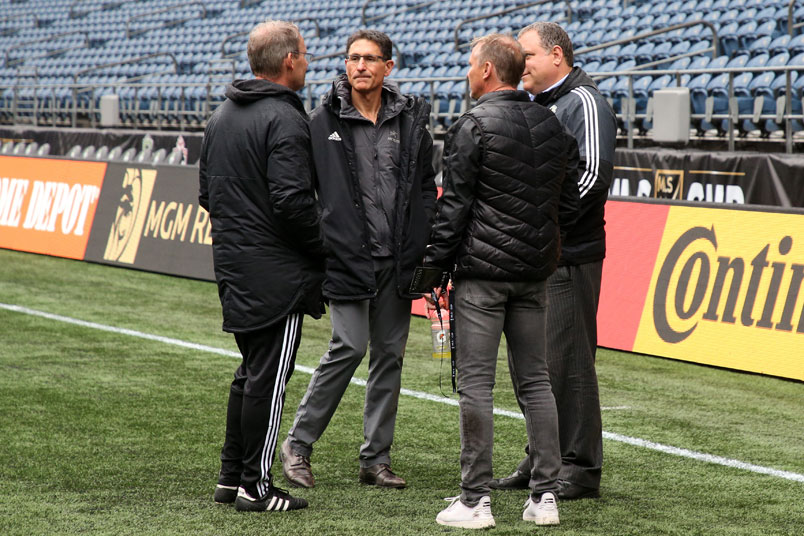 By Jason Davis – WASHINGTON, DC (Nov 13, 2019) US Soccer Players – Over in England, where the weather is wet and the soccer is pure, there exists the idea of the “community club”. In a very general sense, the label applies to clubs that can count numerous locals among its administrative, coaching, and player ranks while also being responsive to the community it represents. Rather than the toy of a billionaire who lives on the other side of the world, the community club is the game as it was meant to be. An expression of the passion for the sport of a single town, borough, or city built on those connections.

Community clubs are part of the fabric of the places they come from. In an era when the chase for international revenue is fierce among the bigger clubs, it’s notable when a team focuses on its neighborhood over a quest for worldwide recognition.

Even in England, community clubs are extremely rare. They typically only exists at the lower levels of the pyramid. By their nature, they lack significant resources and are liable to hit a ceiling on success. The Premier League turns on money. That money either comes from the massive reach of a world-famous team (see: Manchester United and Liverpool) or the pockets of one of the world’s richest families (see Manchester City).

Sometimes big clubs can represent their communities well, especially via player development. Manchester United famously won a haul of trophies in the 90s and 2000s thanks to a group of Mancunians who rose through the clubs academies. Rarely can clubs of any real profile boast locals in all of their key off-field positions. Clubs that have managers, presidents, and technical directors who come from the immediate area aren’t in the running for top division titles.

Except for the Seattle Sounders, Major League Soccer’s one exception to a rule that calcifies more and more by the season.

The 2019 MLS Cup champions have Seattle-area natives in three leadership roles in addition to several locally-bred players. No other team in MLS can claim the same, even without measuring up to the Sounders’ status as an elite MLS franchise. Considering the youth of both the league and many of its clubs, Seattle’s achievements while representing its community so thoroughly is remarkable.

Brian Schmetzer raised his profile in North American soccer when he reached the MLS Cup final this season. Schmetzer’s third Western Conference title in four years with the Sounders made it impossible to leave him out of a conversation about the league’s best coaches.

Schmetzer’s rise to the elite of the MLS coaching fraternity happened while he was leading his hometown club. The brighter spotlight on Schmetzer, both before the final and after when he lifted a second MLS Cup with the Sounders, served to bring to everyone’s attention Schmetzer’s deep connections to the club he coaches.

He’s not a transient coach, landing in Seattle because a job was open. Schmetzer joined the Seattle Sounders of the NASL straight out of Nathan Hale High School in Seattle and played with the club until it folded in 1983. A meandering path as a coach eventually brought him back to Seattle to manage the USL A-League version of the club. He won a championship in the USL First Division with the Sounders in 2005.

Schmetzer’s path to managing the MLS Sounders wasn’t straightforward. He waited seven-and-a-half seasons before getting a chance to be the man in charge in the top division well into the 2016 season. He won MLS Cup that season. Despite that success, he’s felt pressure on his job when the Sounders weren’t doing well. Being a local doesn’t mean being untouchable. Three seasons and a second MLS Cup triumph later, Schmetzer has won the support of everyone in Seattle.

It might not always be possible for the Sounders to have a coach who grew up in Seattle and played in a Sounders uniform. This is a special time that should get a longer run because of his success.

The man most responsible for keeping Schmetze is also a massive reason for the club’s success and a Seattle soccer fixture in his own right, investor/operator Adrian Hanauer. Hanauer caught the soccer bug growing up in the Seattle area and turned his interest into action when he gained control of the A-League Sounders in 2002. Willing to put money down on making soccer work in the Pacific Northwest, Hanauer stepped up to help solidify the Sounders’ business at a time when lower division soccer clubs were in danger of folding following every season.

Hanauer that hired Schmetzer the year he took control. That set in motion the series of events that would lead to the pair, along with Seattle-area native Chris Henderson, to become leaders of the franchise.

Henderson joined the Sounders in January of 2008, representing the first front-office hire for the club as sporting director. The former player and one-time holder of the record for MLS appearances comes from nearby Edmonds, Washington. That wasn’t the reason he got the job, but it did seem right for the team to hire one of the most famous playing products that Washington state has ever produced.

Henderson played 79 times for the USMNT. He was the youngest player on the roster of the 1990 World Cup team. His playing resume is helped him get started first as an assistant coach, then as a key part of the Sounders’ brain trust. As much as Schmetzer and Hanauer, Henderson’s connections to the community bolster the club’s ties to soccer in the state of Washington.

The Sounders don’t have to play up their community club bonafides. They go well beyond the presence of a few local products in the roster, defining the club as one run by locals for the benefit of the community.